CULTURE
The Ganja Grind: Supreme’s “BLESSED” Proves Skater Tyshawn Jones Is King of NYC
AD
Tyshawn Jones, Na-Kel Smith, Kevin Bradley, and the rest of Supreme’s youth crew are back, turning in a heavy late entry for 2018’s skate video of the year.
Published on November 28, 2018

In 2016, Supreme — the New York City skate shop turned fashion house — drew national attention, ire, and the store’s infamous line of hopeful customers for the release of a red masonry brick stamped with the company’s bold italicized box logo. Unsurprisingly, the clunky ephemera sold out. Last week, the sartorial darling did themselves one better: In the era of high-speed buffering, four-inch screens, and laptops without disc drives, Supreme sold out a newly-released DVD in less than a minute.

By the end of the holiday weekend, the highly sought-after $48 digital video disc bundle — which included a copy of the brand’s latest skate video BLESSED, paired with a commemorative photo book and t-shirt — was popping up on eBay and resale site StockX for more than triple the retail price.

From the jump, BLESSED picks up where Cherry, Supreme’s first full-length video from 2014, left off — with a surge of teenage angst by way of 21-year-old Ben Kadow’s street grabs and awkward drop-ins. With a shaved head, permanent scowl, and an endless bag of little kid tricks on steroids, the first part matches perfectly with the wailing Smashing Pumpkins soundtrack. Twisting the knife into the heart of hypebeasts everywhere, Kadow films a trick wearing the highly coveted Supreme x Louis Vuitton t-shirt with the word “dumpster” scrawled in Sharpie beneath the almighty box logo. Jokes on you, Louis.

The video finds its groove quickly in a shared part from newly-minted movie star Na-Kel Smith and Kevin Bradley, aka the “Kush Cowboy.” Na-Kel and Kevin were both introduced to the skate world at large in Cherry, and have since turned into two of the industry’s most talented and endearing pros. Bradley, still in braces at 23, came by his nickname honestly, posting pictures of himself partying on social media nonstop and producing less footage than his clip-obsessed peers. He prefers quality over quantity, and possesses a style well beyond his years. But more than the tricks, it is the documentation of the duo’s growth, and even more so the footage of Nak and Kevin’s friendship, that separates BLESSED from other skate videos. 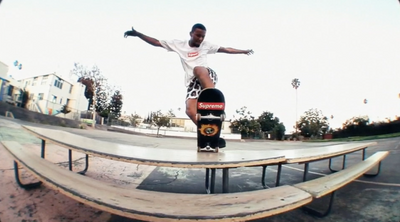 Clocking in at nearly an hour and a half — more than twice the length of Cherry — BLESSED is not just a throwback to a bygone era of feature-length skate videos, but a love letter from Supreme’s in-house director William Strobeck to the off-camera aspects of skating. “I want to show that there was something a little more than just trick, trick, trick, trick, trick, alright, video done,” Strobeck told NYC skate website Quartersnacks. With the help of skate filmers Johnny Wilson and Logan Lara, Strobeck uses lingering long shots and intense, jarring close-ups to immerse viewers into each skate spot and the scene between tricks. The attention to detail allows BLESSED to capture the intense feelings of joy and friendship that skaters live for, as well as the struggle of trying to land incredible tricks in the face of angry security guards, trespassing laws, pedestrians, and traffic.

On the other side of the coin, though, Strobeck, an industry veteran with more than 20 years of filmography experience under his belt, also includes some downright creepy b-roll of unsuspecting women minding their business in public, a few too many shots of middle fingers to the camera, and excessively corny close-ups of skaters passing joints and blowing smoke. In other words, BLESSED offers a peek through the looking glass at what it’s really like to hang out at a skate session, as long as you’re willing to watch the scene through the eyes of the one guy in the crew over the age of 30. Coupled with the glaring absence of the adults in the scene, like Fucking Awesome head honchos Jason Dill and Anthony Van Engelen, as well as Cherry standout Alex Olson, it becomes clear that the Cherry kids have spent the last four years growing up, but Bill’s eye and direction have remained stuck in arrested development.

After standout parts from Rowan Zorilla, Sage Elsesser, and Vincent Touzery, as well as more spot-focused cinematic loitering in Paris and San Francisco, the extra-long runtime becomes noticeable and BLESSED starts to drag. But only for a second before Strobeck takes us back to New York and Rick Ross starts playing.

With Rozay bellowing the summer 2010 hit “B.M.F.,” 19-year-old Tyshawn Jones switch flips into the fountain at Washington Square Park to rounds of applause from onlookers and tourists distracted from their lunch. Tyshawn is unfazed. Tyshawn is always unfazed.

Born, raised, and still residing in the Bronx, Tyshawn is the last of a dying breed — the epitome of New York City cool. His skating is enough to make you forget about the insurmountable rents, dying mom and pop businesses, and the crumbling subway system. Tyshawn’s New York is still a playground, and Tyshawn’s New York is perfect.

Over the span of two songs — the Ross banger and a tear-jerking tribute to the late Supreme affiliate and beloved pro skater Dylan Rieder by way of Bob Dylan’s “Knocking On Heaven’s Door” — Tyshawn proves that he is without a doubt the 2018 Skater Of The Year, whether Thrasher decides to give him the trophy next month or not.

To drive the point home even further, Tyshawn debuted “KILLER” a bonus solo part, just days after the release of BLESSED. Once again filmed by Strobeck, but this time entirely shot at the fenced-in slab of cement at 6th Avenue and Houston Street (TF West, as it is affectionately known by locals), Tyshawn demonstrates a level of power never seen before, popping ollies over four standing trash cans in a row, and nollie flipping over another upright can. The short clip ends with a familiar shirtless kid — Tyshawn’s unnamed but ever-present hype man — declaring TJ “The King of New York.” At this point, the crown is pretty hard to deny.

ENTERTAINMENT
MOVIES
REVIEW
CULTURE
MORE...
Zach Harris
FOLLOW
Zach Harris is a writer based in Philadelphia whose work has appeared on Noisey, First We Feast, and Jenkem Magazine. You can find him on Twitter @10000youtubes complaining about NBA referees.
Share this article with your friends!
AD
By using our site you agree to our use of cookies to deliver a better experience.
Accept
Decline
MORE FROM MERRY JANE