Cannabis and skateboarding are like peanut-butter and jelly; they’re both great on their own, but even better together. In our new column The Ganja Grind, we’ll take you into the fold of what to look out for in the world of skateboarding. From interviews with our favorite pros and compilations of social media hijinks, to video reviews and sneaker releases, this series will get your week rolling.

This Friday, November 9th, London-based skateboard company Palace will release its most ambitious line to date, an exclusive collaboration with the globally-renowned, legacy fashion label, Polo Ralph Lauren. The collection — featuring loud loafers, corduroy trousers, flowing satin shirts, and a sweater featuring the iconic Polo bear mid-kickflip — will be available in only 11 retail stores worldwide, and is expected to sell out immediately.

The collaboration was announced via a glorious 43-second lookbook video in which Palace team riders Chewy Cannon, Lucien Clarke, and more flex in true Polo style: We see the gents draped in luxurious threads as they jump horses over the hoods of European rally cars. Sultry horns swell in the background and there’s plenty of slow-mo, giving the clip a classic cologne campaign vibe.

But while the connection between a British skate company and America’s premier country club clothier may seem commonplace in today’s street-centric fashion industry, such eclectic collaborations are still a relatively recent concept.

Demarcated by a simple “x” between brand names, collaborations are the most prominent lasting relic of the mid-aughts streetwear boom anchored by skate-focused fashion heavyweights Supreme, Diamond Supply Company, and A Bathing Ape. Collaborations pushed the skate industry’s all-hands-on-deck community ethos to a wider audience, made room for creatives to join forces and expand their reach (and customer bases), and allowed for companies to make connections that more clearly established a brand’s identity, perspective, and voice.

In skateboarding, collaborations came about by way of artists, with painters and illustrators tapped to make one-off t-shirts or deck designs. In the 2000’s though, as skate fashion evolved into now-ubiquitous streetwear, collaborations have spread past the traditional skate shop to include sleekly-branded home goods, punching bags, and love letters to long-cancelled anime shows.

To celebrate the release of the Palace x Polo partnership, and contextualize the significance of the South Bank boys linking up with Ralph, we put together a list of some of the most memorable collaborations in skateboarding and fashion history. Don’t get too excited, though. While these Palace x Polo pieces are worth pining over, chances are it will take your entire holiday budget to cop any item from the cutthroat secondary market. 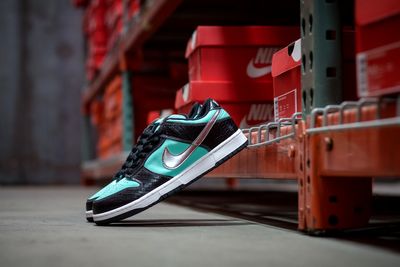 The “Tiffany” was the shoe that flipped the switch. Merging the world of skate shoes and sneaker obsessives, Nike debuted its skate line, Nike SB, in 2002 and immediately changed the game. Introducing premium materials and limited-release exclusivity to skate footwear, SB hit the scene with the Dunk SB, a souped-up ‘80s basketball shoe with a puffy tongue and suede toe cap. Releasing new colorways every month based on old cartoons, beer bottles, state flags, and other well-thought designs, the stories behind the soles piqued the interest of sneaker fans globally. Intensifying the craze, SBs were initially sold only at independent brick-and-mortar retail stores, bringing the full weight of the sneakerhead universe to tiny skate shops everywhere.

The “Tiffany” Dunk, a partnership between Nike SB and California-based skateboard hardware and streetwear brand Diamond Supply Co. released in 2005, featured a teal colorway ripped from the luxury jeweler, black crocodile skin accents, a chrome swoosh, and a diamond accent on the tongue. It wasn’t the first Dunk to inspire overnight lineups outside of skate shops or insane resale prices, but the bright colorway and extreme exclusivity secured Nike SB as the 2000’s most hyped sneaker, and led thousands of hypebeasts to pull their hair out watching skaters tear them to shreds with ollies and kickflips. And now, 13 years after their one-time-only release, it will still cost you over $1,000 to secure a pair.

If we’re going to talk about collaborations in skateboarding, we may as well mention at least one set of actual skateboards — and not just t-shirts and sneakers. Capitalizing on the booming superhero subculture that’s taken over movie theaters, Halloween superstores, and what seems like every single facet of pop culture, street skating pioneer Rodney Mullen’s Almost Skateboards teamed up with DC Comics for a multi-season capsule collection of decks featuring Batman, Superman, Wonder Woman, and DC universe heroes.

The super decks weren’t a huge hit within the skate community, and didn’t quite inspire sneakerheads to pull out the tents and lawn chairs. But the collaboration did open the doors for comic book fans to add a few skate decks to their endless list of precious collectibles, and helped inspire other skate brands to embrace their own heroic obsessions. 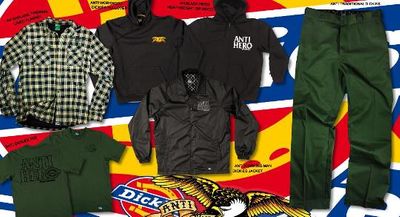 Long before skate clothes were stoking the flames of fashionistas and venture capitalists, skaters around the world dawned Dickies workwear without much of a thought. Known for its rugged, heavy-weight material and no-frills designs, Dickies has always matched skating’s DIY, dirt-under-the-nails attitude. So when San Francisco-based Deluxe Distribution — the powerhouse crew behind Real and Anti-Hero Skateboards, Spitfire Wheels, and more — teamed up with Dickies for a line of work pants, flannels, hoodies, and jackets in 2010, the fit could not have been more perfect.

Skipping a traditional deck series for the co-branded clothing with Anti-Hero and Spitfire, the brands cemented the previously-unspoken bond between the skateboard industry and construction workers’ favorite clothing company. Just one year after Dickies’ first skate collabo was released, the workwear brand cut out the middleman and started their own skate team. The company released a line of clothes specifically aimed at skateboarders, and put together a team of well-respected pros who are still on Dickies’ payroll today. 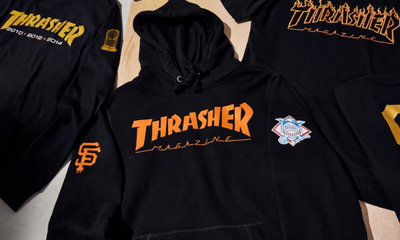 For most of skateboarding’s history (and present, depending on who you ask), skaters have considered jocks to be arch nemeses. But as times have changed and skating’s appeal has gone mainstream, the border between skating and traditional sports has blurred. Hell, even kid-friendly board brand Element joined forces with the MLB for team decks a few years ago.

Released earlier this year, the Thrasher x Giants gear consisted of hats, shirts, and hoodies with throwback logos celebrating the Giants’ now-demolished stadium, Candlestick Park. As the City By the Bay continues to cater its hills to tech bros and push out the hippies and skaters that once rolled down them, the left-field collaboration is a surprising-yet-apt symbol of an older San Francisco.

It may not be Louis Vuitton, Commes Des Garcons, or one of the dozens of other highly-prized collaborations that have emerged from the Manhattan skate shop turned streetwear goliath, but Supreme’s rebranded set of Hanes men’s basics has become one of the brand’s most iconic products.

Featuring boxer briefs, white tees, socks, and long johns, the Supreme x Hanes collection is the exclusive skate brand’s only regularly-recurring product line; it gets re-released every single season. Available from the Supreme webstore for $20-36 per 3 or 4 pack, the collaboration is also one of the brand’s more reasonably priced items. The prices are still twice as much as what a pack of Hanes boxers costs at Target, but with all the clout that comes from a Supreme-labeled waistband, it’s not hard to see why the extra-special Hanes have become both your weed dealer and favorite rapper’s go-to undergarments.

FASHION
420
BUSINESS
HISTORY
MORE...
Zach Harris
FOLLOW
Zach Harris is a writer based in Philadelphia whose work has appeared on Noisey, First We Feast, and Jenkem Magazine. You can find him on Twitter @10000youtubes complaining about NBA referees.
Share this article with your friends!
AD
By using our site you agree to our use of cookies to deliver a better experience.
Accept
Decline
MORE FROM MERRY JANE