CULTURE
The Ganja Grind: Nyjah Huston Is Pro Skateboarding's Ultimate Movie Villain
AD
The world’s most quantifiably successful pro skater is leaning in to life as a bad guy, and it's threatening to overshadow his skills on the board.
Published on January 30, 2019

Last week, professional skateboarder Nyjah Huston posted a video of himself to Instagram. Dressed in all black and riding a blacked-out motocross bike down a busy Southern California road, Huston speeds down the handicap ramp of a streetside office building, crosses blindly through an intersection, and catches air off another handicap ramp — this time into traffic. There’s an SUV (all black, of course) filming the entire escapade as it speeds alongside him, catching every engine groan as Nyjah wheelies his way out of the frame.

More than just visualize how needlessly reckless the world’s most quantifiably-successful street skater is, the bike video proved to me once and for all that Nyjah Huston is a real-life movie villain — complete with stadiums full of booing fans, outlandishly offensive interview answers, house party fist-fights, a cemented-on cocky smirk, and even unmitigated corporate greed. I still can’t figure out if he’s doing it on purpose or not, but the contest-crushing rail savant that skaters everywhere love to hate is leaning into his bad guy status, and he’s leaning in hard.

Supported by long-term sponsorship deals with Nike, Monster Energy Drink, Element Skateboards, and more worth millions of dollars, Nyjah is skateboarding’s 1%. Nyjah has 2.8 million Instagram followers. He’s arguably the biggest skater to break into mainstream markets since Ryan Sheckler was on MTV looking for a chill girl. But Nyjah isn’t ready to settle down. Nyjah is ready for mayhem. 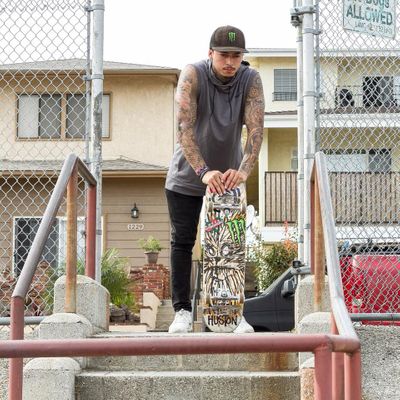 These days, it’s not too uncommon to see four-wheelers and dirt bikes on urban streets, especially in cities like Philly, Baltimore, New York, and Miami, where rappers like Meek Mill have turned vertical wheelies into cultural capital and popularized the #bikelife movement.

Nyjah’s urban motocross exploits were different. Nyjah wasn’t riding with a pack of friends, cruising the city, enjoying the weather. No, Nyjah was wearing a helmet — with a visor. Nyjah was riding like he was chasing someone, or like he was being chased. The more I watched the video — and I watched it many times — the more it reminded me of one person in particular: Johnny Tran.

The Tran cousins, Johnny and Lance, are the fictional villains in the very first Fast and the Furious movie. Like Nyjah, the Tran cousins are moto bike enthusiasts who do not feel bound by traffic laws. In the film’s penultimate action sequence, the cousins end up in a speeding gunfight with Paul Walker’s Brian Spilner and Vin Diesel’s Dominic Toretto; Johnny and Lance on bikes, and the heroes in fast cars. Give Nyjah an uzi, and his handicap ramp hangtime video looks like a deleted scene.

Less than an hour after I had finished my repeat viewings of the makeshift Fast 9 audition tape, TMZ the broke news that Huston was being sued by a man who said that the pro skater had beat him up in a fist fight at a house party in 2017. The suit claims that Huston jumped the victim, breaking his nose and leaving a cut above his eye. It is a serious allegation (which Nyjah wholeheartedly claims was an act of self defense), but is also undeniably the stuff of Hollywood screenwriters’ dreams.

Born in Davis before eventually moving to Orange County, Nyjah Huston’s house parties are a thing of Southern California lore. When Nyjah sold his 6,100-square-foot OC mansion in February 2018, his neighbors literally rejoiced. During the first nine months that he lived at the San Juan Capistrano estate, the Orange County Sheriff's Department said they received more than 20 noise complaint calls. And if you’re to believe the latest lawsuit filed against him, once the beer runs out, Nyjah is ready to rumble.

You could pick any teen movie with a house party brawl you want, and I suspect it would look eerily similar to Nyjah’s backyard rager in question. But I like to think it went down something like the impromptu house party MMA bout in the 2008 B-movie Never Back Down.

Okay, so Nyjah’s party brawl probably didn’t have boxing gloves and a referee, but after watching YouTube documentation of one of Nyjah’s notorious 2017 keggers, the same stench of energy drinks, booze, and frat house fuckery comes through clearly. And like every cartoonishly-douchey Hollywood high school villain, it’s not hard to recognize the same self-assured smirk from Never Back Down’s antagonizing tough guy every time the camera pans to Nyjah’s face.

As it becomes even more evident that Nyjah could easily be cast as a teen bully deep into his mid-20s — and revels in stunts like frightening drivers on the PCH with his Fast and the Furious cosplay — it’s probably about time we got to his status in skateboarding.

Hyped the fuck up!!!

And as skateboarding continues to breach sporting’s mainstream, Huston has already fully abandoned the calm, collected, effortless cool that skaters have honed over decades of video parts and art world hobnobbing. Instead, Nyjah wears Airpods during competitions, celebrates his wins with aggressive enthusiasm, and prefers the kind of outfits typically reserved for Equinox trainers. Sometimes he wears a cape.

The only time I’ve seen Nyjah in person, at the 2014 Street League Super Crown in New Jersey, he landed a full cab flip to secure a walk-off win, beating out hometown hero Ishod Wair. The whole crowd booed.

With a win at last month’s Street League World Championships in Rio De Janeiro, Nyjah secured his 12th event victory, the most by any one skater since the series was founded in 2013. According to The Boardr, Nyjah is the number one ranked skateboarder in the world. Nyjah is Ivan Drago. Nyjah is Team Iceland. Nyjah is Shooter McGavin. Nyjah is Heddo the New York Met crushing 400 foot dingers off a 13-year-old.

In a TMZ Sports video showing Nyjah returning home from his latest Street League win in Brazil, an anxious reporter asks about his trophy room, to which Nyjah responds “there’s no room for the second or thirds, only first.” Humility is not his game.

When skate fans do cheer Nyjah on, it is often due to, and not in spite of, his villain image. After the same recent contest win in Brazil, Nyjah posted a photo of himself posing with two young fans, all three of them draped behind a homemade banner that reads “Nyjah take a photo with me and I let you fuck my mom please 69.”

Piling on to his caricature-like villainy, when asked about the growing number of women in skateboarding, Nyjah once told Thrasher Magazine that, "Some girls can skate, but I personally believe that skateboarding is not for girls at all. Not one bit."

But even more than just a real-world redux of Chad Fernandez’s Oscar-worthy performance as Rival Skater #1 in the 2003 classic Grind, the combination of Nyjah’s on-board skills, off-board arrogance, and deep pockets have facilitated something much more sinister.

In August 2018, it was revealed that Nyjah owned 2% of the LA Weekly. A long-running Los Angeles alternative newspaper, the Weekly had been purchased by a secretive group of conservative investors in 2017, who then immediately cleared house and fired one of the industry’s most respected teams of journalists.

Even after the initial group of wealthy Orange County investors was divulged later that month, Nyjah’s name was not tied to the gutted publication — or the subsequent boycott that followed — until more than eight months later. In the meantime, the LA Weekly published a March issue featuring an exclusive cover story on — you guessed it — the “bright future” of Nyjah Huston.

The publication did not disclose the fact that Nyjah owned 2% of the paper at the time of publishing, and Nyjah has never spoken about his connection to LA Weekly. The skater was only named as a part of the paper’s ownership group after one of his co-investors, David Welch, filed a lawsuit to dissolve the investment, claiming that the new owners, including Huston, were “pillaging the LA Weekly’s corporate opportunities for [their] own separate gain.”

Of course, villainy comes in different shades, and riding a motocross bike off SoCal handicap ramps like the Tran cousins is certainly more forgivable than living out Gordon Gekko fantasies by helping to push hard working journalists to the unemployment line.

Next year, in all likelihood, Nyjah will be in Tokyo representing America in skateboarding’s Olympic debut, bringing his bad guy status to the global stage. And with the street style Olympic contest set to be scored exactly like Street League, it’s safe to say that Nyjah will be an early favorite to take home a medal. 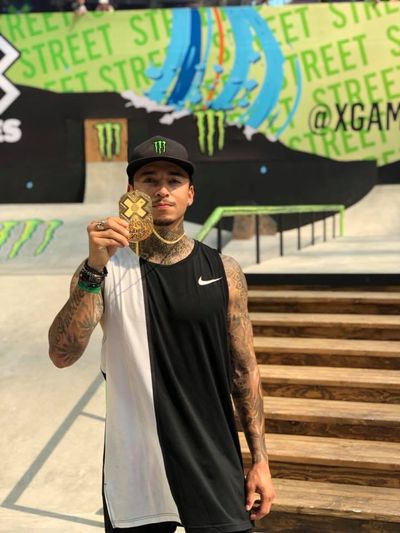 But just like in the movies, I’ll be rooting for the underdogs, supporting skaters from Brazil, Canada, Spain, and other international hotspots, in hopes that maybe — just maybe — someone can finally come along and knock off the villain.

Like everyone in the industry, Nyjah will inevitably become just another old skater complaining about how much better things were in his day. But when it's all said and done, you can bet that no matter how many trophies he’s racked up, or how many stairs he’s counted, we’ll all remember him first and foremost as the bad guy with the billowing cape.

SPORTS
VIRAL
CULTURE
OP-ED
MORE...
Zach Harris
FOLLOW
Zach Harris is a writer based in Philadelphia whose work has appeared on Noisey, First We Feast, and Jenkem Magazine. You can find him on Twitter @10000youtubes complaining about NBA referees.
Share this article with your friends!
AD
By using our site you agree to our use of cookies to deliver a better experience.
Accept
Decline
MORE FROM MERRY JANE