CULTURE
The 5 Hottest Brands Dominating Cannabis Culture in 2020
AD
From Daily Bonfire to KITH to Star Wars kicks and beyond, these are the top five brands to keep an eye on in the New Year.
Published on December 3, 2019

As 2019 smolders down to its final embers, don’t panic — the proverbial pipe of 2020 cannabis culture is primed, packed, and ready for lift-off. Of course, accumulating the dopest strains from 420-adjacent apps, witnessing great fashion, experiencing the best art, and other forms of fun are key to righteously blazing up the new year.

In assessing the hottest brands, the sickest styles, and the most cutting-edge advances in bud-related must-haves for the future, we’ve run down and rounded up Tech-Cannabis, elevated Mickey Mouse street wear, mind-bending dystopian future anime, Star Wars kicks, and a weed-friendly music fest courtesy of Iron (Lungs) Mike Tyson. So, if you're worried about missing out on what's hot heading into 2020 — never fear, MERRY JANE is here.

It’s the dawn of 2020. You’ve got your mind on marijuana and marijuana on your mind. You’re also scrolling through apps and dreaming of a one-stop destination that could combine your random knowledge of reefer, movies, music, and celebs with the competitive fun of gaming — and maybe even a chance to score cash. It could happen. Some day.

Well, we're happy to tell you that today is that day! Open your phone’s app store right now and download Daily Bonfire by HelloMD. Daily Bonfire is a trivia quiz combining cannabis and pop culture that gets played live every Monday, Wednesday, and Friday at 1 pm PST.

It’s named after the magic that happens when friends gather around a firepit at the beach or camp or go to a music festival or anywhere that involves burning wood, passing joints, and bonding with buds. How can an app achieve all this? By recreating that warm, buzzy glow each and every you visit.

Users answer cool, funny questions and compete for $420. Yes! That means you have the chance to win $420 if you play. Bear in mind, of course, that this is pot-inspired trivia created by and for pot-lovers, so the gameplay can get pretty wicked. Like the smokable subject matter, Daily Bonfire is for people who are over 18-years-old — and, unless you work in a place like MERRY JANE, the content is also probably NSFW. 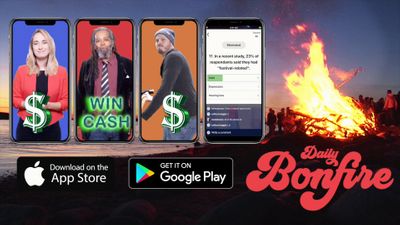 If you respond to each challenge correctly, you’re in the running to split the jackpot with others who attained perfect scores. If you’re the only one who gets every answer right, the entire $420 is yours to keep — at least until you get to your favorite dispensary.

With slick graphics, sharp wit, captivating gameplay, and a chance to cash in on your repertoire of facts and figures, Daily Bonfire is destined to dominate the weed world from this moment on. Get in on the excitement now, make friends, have fun, and go for that $420. Who doesn't want to earn extra cash for knowing cool stuff? 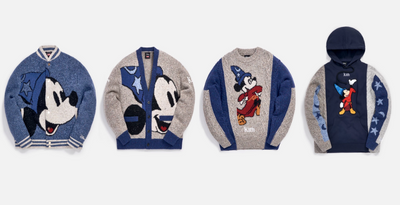 Ronnie Fieg’s ultra-hype fashion brand KITH gets its name from the slang term referring to the friends you feel bonded to who aren’t your blood relatives — you know, like soul family. In that sense, KITH’s brand new multi-product line expands that concept to celebrate a homie whose existence goes beyond the mere human: Mickey Mouse.

With everybody doped up, chilled on the couch, and diving deep into Disney+ for hella happy hours on end, we’re definitely at a time where Mickey and marijuana are meeting for an ultimate union. KITH just so happens to be facilitating that association by releasing a full line of street wear and collectibles celebrating eight decades of the mouse who built the Magic Kingdom. 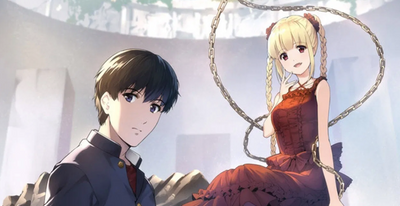 If Pokemon is the gateway drug (so to speak) for a lifetime of positive indulgence in anime, Darwin’s Game pushes that epic-saga-meets-competition sensation to new adult levels of exhilaration and intoxication.

Darwin’s Game chronicles Kaname Sudo (Yúsuke Kobayashi), an average teen who unsuspectingly opens the app of the title and never gets a chance to look back. The game instantly sucks Kaname into a kill-or-be-killed universe of endless battles against psycho-freaky creatures who boast an unknowable array of supernatural powers.

While fighting to survive, Kaname teams up with another player, Karino Shuko (Reina Ueda) and together they grapple with the infinitely perilous, eye-popping universe conjured by Darwin’s Game.

Pick a series of psychedelic weed strains and repare to toke hard in 2020, then, as you take in each new episode of Darwin’s Game and its heady tripscape of chills, thrills, and kills. 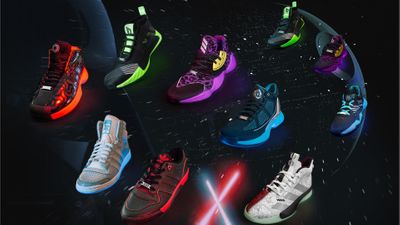 With The Mandalorian completely owning the end of 2019 — damn, we just made you think of Baby Yoda and smile — and The Rise of Skywalker poised to smoke all other holiday blockbusters on the big screen, we’ve hit a potent new peak in the overwhelming omnipresence of Star Wars.

That same dominance holds true for stoner fans of the franchise — and especially now with Star Wars surpassing the limits of pop culture and hurling at hyper-speed into the extremes of pot culture. Case in chronic point: Adidas x Star Wars line updates three footwear models beloved by marijuana fans to pay tribute to the starships of Star Wars: the UltraBOOST S&L, UltraBOOST 19, and Alphaedge 4D.

The UltraBOOST S&L is modeled after the X-Wing Starfighter. Boasting a “sesame/active orange/carbon” color scheme that matches the tones of the craft that Luke Skywalker first made famous, the S&L also features X-Wing imagery on its it soles, glow-in-the-dark components, and iconic quotes on the heel tabs: “Stay on Target” and “The Force Will Be With You, Always.”

Next is the UltraBOOST 19, which pays tribute to the Millennium Falcon with a silhouette of the ship and heel tabs that declare: “Jump to Lightspeed” and “Never Tell Me the Odds.”

Finally, and most alluringly evil, the Alphaedge 4D salutes the Death Star with a laser green and black colorway, a 3D-printed 4D midsole, and heel tabs that ominously decree: “That’s No Moon” and “The Power of the Dark Side.” 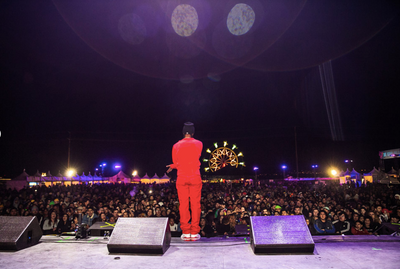 On February 23, 2019, the Kind Music Festival kicked off as a pop-up event in Desert Hot Springs, California. More than 5,000 music lovers, weed enthusiasts, and devotees of positivity converged to dance, get high, and experience one another in pursuit of spreading creativity, chill vibes, and planet-enriching joy.

All this took place on the future site of Tyson Ranch, a 420-acre entertainment complex, luxury glamping resort, and cannabis research and design facility created and owned by Mike Tyson.

In addition, a portion of the KMF proceeds benefitted Standing United, a charity that aids those struggling with drug addiction and homelessness.

At present, details regarding a second KindFest remain secret. But it's among the most anticipated potential happenings on the upcoming calendar of stoner music happenings. Ya dig?

The lessons of Tyson and company’s first successful festival have also already informed and energized the reefer-related possibilities of 2020’s other prominent fests. Look, especially, to Lollapalooza next summer in Chicago, where recreational weed will be legal come midnight of the New Year.

This article was made in partnership with Daily Bonfire and HelloMD.

CULTURE
ADVERTORIAL
POP CULTURE
SPONSORS
MORE...
MERRY JANE Staff
FOLLOW
MERRY JANE is based in Los Angeles, California and is dedicated to elevating the discussion around cannabis culture.
Share this article with your friends!
AD
By using our site you agree to our use of cookies to deliver a better experience.
Accept
Decline
MORE FROM MERRY JANE