All photos by Pat Blashill, courtesy of Bazillion Points

In 1978, the Sex Pistols played a legendarily apocalyptic gig in the great state of Texas. From the ash-heaps they left behind, up sprung a fearless, ferocious, hallucinogen-fueled punk scene that produced much of the most adventurous music — and characters — of the ensuing decade. Cheap weed, potent acid, and copious magic mushrooms also had a lot to do with it.

Austin native Pat Blashill was there, clicking away with his trusty 35mm camera and documenting the conception, climax, and global cultural triumph of ’80s punk as it broke loose from the land of football, cowboy singers, and evangelical Christian fervor.

Among the luminaries depicted here are the Butthole Surfers, Daniel Johnston, Scratch Acid, Big Boys, the Dicks, the Offenders, Meat Joy, and scores more. In addition, Texas Is the Reason contains essays by filmmaker Richard Linklater, David Yow of Scratch Acid and the Jesus Lizard, Teresa Taylor of the Butthole Surfers, and local legends Adriane “Ash” Shown and Donna Rich.

Now living in Vienna, Austria, Pat Blashill took some time to talk to MERRY JANE about Texas Is the Reason and the tripped-out, brilliantly berserk, thrillingly dangerous time and place the book captures. 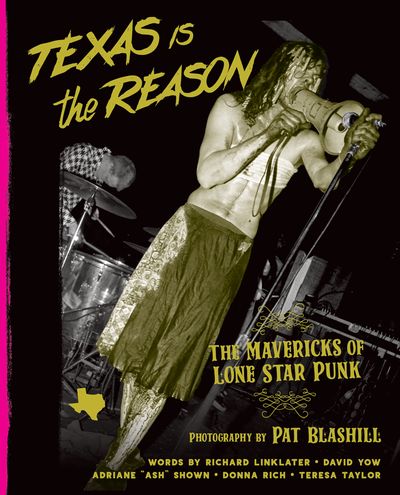 MERRY JANE: What came first for you — photography or music?

Pat Blashill: I like the way you put that question, and I really can’t answer it! I was listening to pop music and loving listening to the radio when I was very young. My parents, particularly my dad, bought me and my brothers Instamatic cameras, so we were using those when we were pretty young, too.

When did you make the leap to photographing musicians and rock shows?

I started bringing the camera to shows pretty early. I remember photographing Cheap Trick in Austin. I also photographed Pat Travers, because I was kind of a stoner, and I made sure to see Pat Travers! Then, I may have photographed Devo before I went to the first punk club in Austin.

From there, I started going to the punk clubs and taking my camera with me. I was studying photography at the University of Texas, and I wanted to be Man Ray. I met a teacher who was a very good documentary photographer, and he guided me with some of the best advice that I got. He said, “You should photograph the things in your own life, because those pictures will matter to you most later; they’ll be important to you later.”

So, I started doing that. By that time, I was going to the clubs and seeing punk rock bands like the Big Boys and the Dicks, and I met David Yow. These people were becoming not people doing something interesting, but the people I hung out with and became friends with. So, my way of photographing my life was bringing the camera with me to those clubs. 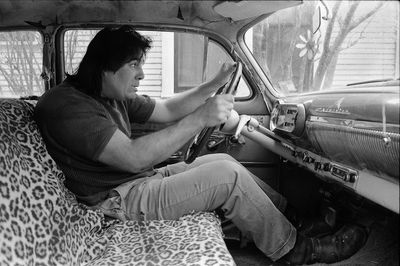 You mentioned Man Ray, the amazing surrealist and avant-garde visual artist. That same spirit of provocative, cutting-edge art certainly seems to have driven so much of ’80s Texas punk. What was it that brought all these insane talents together in this one place at this one time?

That’s the $20 question! People inside and outside of Austin and Texas ponder it. My two cents is that, like punk scenes all over the country, especially at that time, people came together because they felt they weren’t the Leave It to Beaver family — they weren’t perfect, and they wanted to do something different. It’s just that everything was turned up to eleven in Texas.

Texas — I love it, but it’s fuckin’ crazy! There are bad people in Texas, but there are also wonderful people. It’s just very extreme. Texas is super-conservative except for Austin and little pockets of other cities. Things happened in Austin because people were reacting against racism, sexism, and all this conformity shit — and country-and-western music!

People felt it more keenly in Austin and, in Austin, they had permission to let loose in a way they probably didn’t in Dallas or Houston. It just kind of slid out and slimed the sides of everything and boiled over there in a way it just couldn’t have in other places. 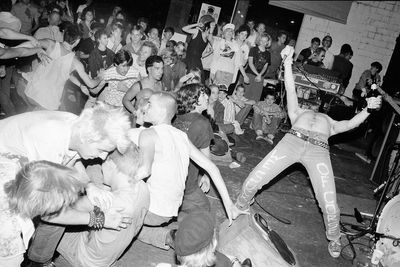 You mention other punk scenes springing up in other areas during the ’80s, but Texas punk is especially weird and daring — true art-freak music. What drove the art aspect of the scene?

Also, like the other scenes that cropped up, you kind of depend on the people who got their first, the first freaks in your town. In Austin, I think the first group really doing their own thing was the Big Boys.

Biscuit, the singer, was a total art freak. He was like, “all art, all the time.” Biscuit and and Chris and Tim (the Big Boys) inspired a lot of other groups to form by just sort of saying, “Whatever you do, do it 100 percent. It doesn’t have to be this sound or that sound. Do whatever you want to, as long as it’s outside the box, creative, and intense.” 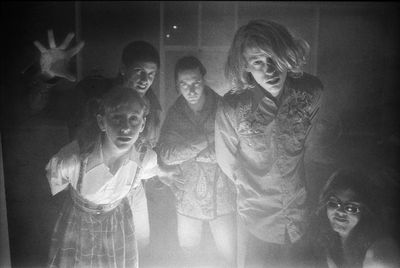 How important were drugs in creating the Austin scene?

My first response is to say, “Drugs were not that big of a deal,” but, you know, that’s not true! It depends on who you ask.

I was a stoner. I smoked pot, and I took the occasional hallucinogenic, but it wasn’t really a lot of my life. For one thing, if you’re on stage and [Buttholes guitarist] Paul Leary is swinging his guitar by the strap, you want to sort of have your wits about you so you don’t get clobbered. So, I was generally fairly coherent.

But, yeah, we smoked pot. There was lots of pot smoking, lots of acid, lots of mushrooms. More than anything, Austin was a pothead and hallucinogens town. 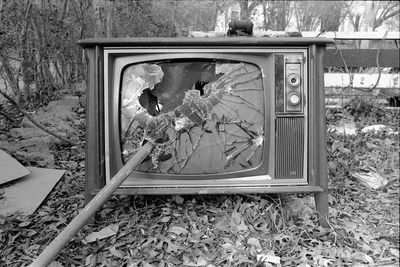 One of the essential figures in the Austin scene was Gary Floyd, the extremely large, outspokenly gay, and sort of gleefully belligerent lead singer of the Dicks. Did you have any interaction with him?

Well, it’s a regret of mine that I didn’t photograph the Dicks more often. They played an early show at the Armadillo World Headquarters called The Punk Prom. It was this eight-band bill just as this great, sort of “cosmic cowboy” hippie-type venue, the Armadillo, was about to close.

The Dicks were on the bottom of the bill and nobody knew who they were, but they put up these crazy, disgusting pornographic posters everywhere. The posters were completely hilarious. They’d say things like, “Everybody with a gun gets in free tonight!” or “By the end of the set, you’ll be queer, too!”

So, the Punk Prom was their first gig, and they were so fuckin’ scary. Gary Floyd was just so angry, so pissed off. Buxf Parrot, the bass player, was possibly even more terrifying.

The Dicks kind of drew a line in the sand that night that said, “You either really mean it, and you’re ready to fight, or you don’t care about the music. You’re either new wave, or you’re punk rock. We’re punk, so you’re either with us, or you’re on the other side… and don’t turn your back on us, because we’ll get you!”

They were super strident, which is actually a polite word for them. They were amazing, but I was frightened of them for a long time. I interviewed Gary Floyd a while back, and he said Buxf still scares him! 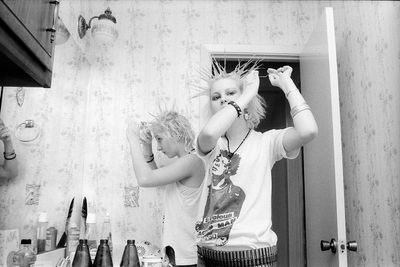 Lynda Stuart and Rene Miller at home in Austin, 1984

Let’s talk about two other Austin outside music icons who are in the book — original psychedelic visionary Roky Erickson and one-of-a-kind singer-songwriter Daniel Johnston.

What I liked about discovering Roky and his 1960s music with the Thirteenth Floor Elevators is that it meant there was this history of crazy, fucked-up music in Austin, and that it was something that spoke to people outside of Texas. It was something to be proud of.

On the other hand, Daniel just kind of inserted himself into everybody’s life, and sort of imagined himself into the scene by force of will. He was so friendly, so lovable, and so ingenuous. Nothing fake about him. Very intense, but he was the real deal. He became ubiquitous around town, handing out his tapes. I kind of loved the way he invented himself and lived the dream. He wanted to be the next Beatles and, in his own way, he got close. 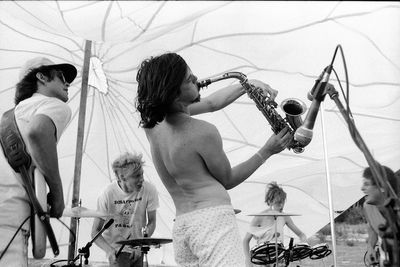 Well, my book and my punk rock life is sort of compartmentalized now. I live in Vienna, which is old and weird, and I try to speak German. I’m a high school teacher now. For years, I worked with refugees, resettling refugees to the United States. I like teaching a lot.

As far as books, this book has just been so much fun. I’d like to do another book, maybe a book of the photographs I took in New York and beyond. Or maybe an oral history of the Texas punk scene. There are so many stories I couldn’t get into Texas Is the Reason.

The pictures are great, and the book is probably better than anything I’ve ever written, but when you turn a tape recorder on next to Gary Floyd, it’s just amazing! King Koffey, the drummer from the Buttholes, did a great interview with me, talking about Texas drag. He said one of the reasons this happened in Texas is that Texans are very proud of their identity as Texans, but they also want to destroy it! King also added, “And that’s our right!” That’s a book, I think. 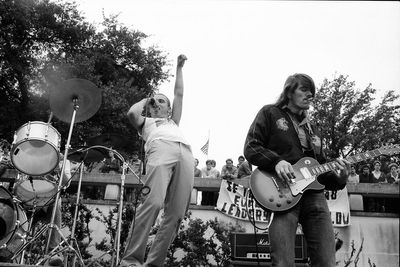 J.J. Jacobson and Tony Johnson of the Offenders playing a political rally at the University of Texas at Austin, 1984

For more on “Texas Is the Reason” visit Bazillion Points’ website and order your own copy!

MUSIC
INTERVIEW
PHOTOGRAPHY
HISTORY
MORE...
Mike McPadden
FOLLOW
Mike McPadden is the author of "Heavy Metal Movies" and the upcoming "Last American Virgins." He writes about movies, music, and crime in Chicago. Twitter @mcbeardo
Share this article with your friends!
AD
By using our site you agree to our use of cookies to deliver a better experience.
Accept
Decline
MORE FROM MERRY JANE