CULTURE
“Teen Movie Hell” Is a Salacious Encyclopedia of High School Sex Comedies
AD
An interview with writer Mike McPadden about his compendium of sleaze-tease cinema, which details everything from "Animal House" to "Zapped!"
Published on April 16, 2019

Author Mike McPadden’s new book, Teen Movie Hell, continues the writer’s obsession with cheese and sleaze, which is rooted in his adolescent fixation upon those two essential elements as they appeared splattered on New York City movie screens.

Happyland’s confessional debacles landed McPadden a gig as a Larry Flynt Publications staff writer when I, as editorial director of Hustler magazine, flew him out to California at his own expense with the promise that all his adult entertainment dreams were about to come true. The Hustler years of intellectual challenge and sensory overload led directly to McPadden’s subsequent career of outsider literary achievement. He is the former editorial mastermind of the Mr. Skin celebrity peepshow website and author of Heavy Metal Movies, a book with a subtitle longer than Gene Simmons’ tongue. 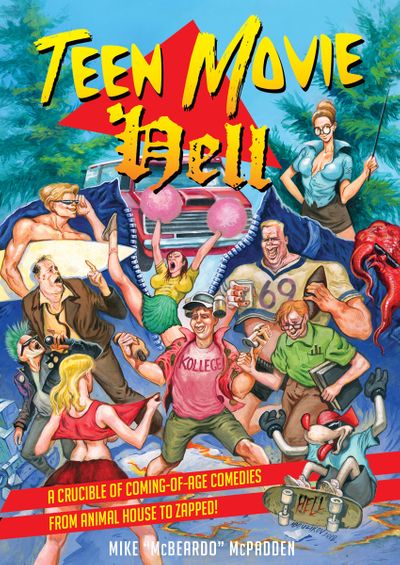 Teen Movie Hell’s own hefty subtitle defines the book as “A Chronicle of Coming-of-Age Comedies From Animal House to Zapped!” In plain English, that means an encyclopedia of sleaze-tease cinema in which nerdy and smoking-hot actors portray high-school students in the grips of a sharply visualized fixation upon sex. Porky’s, Revenge of the Nerds, The Last American Virgin, Joysticks: This slightly pervy, R-rated kid-sploitation genre peaked in the early-’80s, although flickers of key elements can be spotted all the way into 1993’s Dazed and Confused and even in late ‘90s rom-coms like She’s All That.

The book also includes essays from highbrow and low cultural critics, ranging from Katie Rife to Eddie Deezen, Heather Drain, and Lisa Carver, giving Teen Movie Hell a sparkle of redeeming social value generally not recognized in its subject matter upon initial release. McPadden, who contributes to MERRY JANE, began this interview by refusing to unpack his early-1990s beef with Sassy magazine, but things picked up nicely from there. 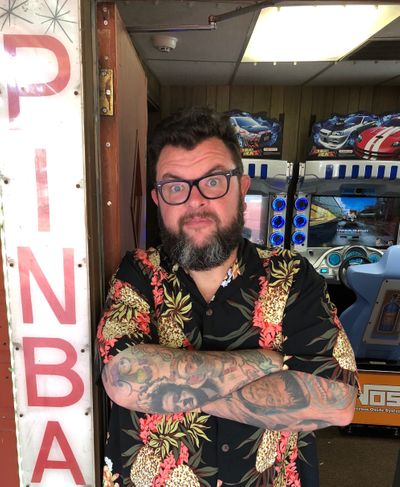 MERRY JANE There’s something surreal about your new book, Teen Movie Hell. Was there really a day when films based on teenage sexuality were marketed as titillating slices of heaven? What has changed?

Mike McPadden: In Little Darlings, a summer-camp comedy that came out in 1980, Kristy McNichol and Tatum O’Neal play camp rivals whose competition against one another is spelled out in the movie’s tagline: “The bet is on—whoever loses her virginity first, wins!”

The rivals played by Kristy and Tatum in Little Darlings were 14-years-old. Fourteen.

The movie was a huge hit. Parents let their kids see it. I first saw Little Darlings as the NBC Sunday Night Movie two years later, with the details of the plot completely intact.

The following year, Private Lessons reaped record profits with its story of a 15-year-old dork having an affair with his sultry, 30-something French tutor played by Sylvia Kristel, an iconic sex star due to the Emmanuelle film series.

One spring later, Porky’s broke box office records by essentially being a softcore spin on baby boomer nostalgia for what they wished high school had been like in the early ’60s.

From there, the craze for dirty-minded, nudity-filled adolescent sex comedies dominated theaters, video rental stores, and cable TV programming for the next five years or so.

The whole thing ran out of steam by 1988. First, John Hughes gentrified the teen sex comedy with his PG-13 morality tales. Second, the ubiquity of VCRs made it easy for teenage boys to get their mitts on hardcore pornography. That demolished the commercial appeal of movies promising nothing more than a ten-second peek into a locker room.

Culturally, there’s been a heightened awareness about the harmful impacts of sexual objectification, cruel jokes, and stereotypes presented as good, clean humor — all of which are elemental ingredients of the teen sex comedy. 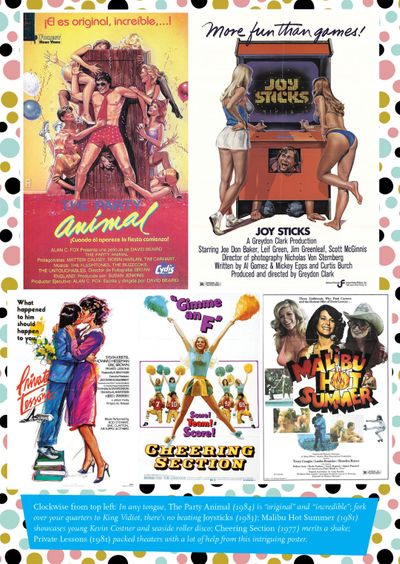 Is empowered drug use over- or under-represented in the movies of Teen Movie Hell? Were drugs introduced to the Teen Movie Hell narratives as cautionary elements or to heighten the fun?

Partying is as essential to teen sex comedies as is nudity. Mostly those parties involve beer, which lends itself to visual high jinks — keg stands, puking, and such — but drugs are heartily represented, too.

Typically, the drug is pot, which is realistic in terms of teenagers. The characters typically giggle, open up, get friendly, make jokes, and feel more at ease with themselves and the world around them. In fact, drug use in teen sex comedies of the 1970s and ’80s is presented almost entirely as 100-percent positive. I can’t think of one comedy in which pot, pills, and even cocaine don’t lead directly to a great time free of serious consequences.

The fun-house mirror version of this was a bunch of made-for-TV movies like Angel Dusted from 1981, where Helen Hunt gets high once and jumps through a second-story plate-glass window.

In 1980, Scott Baio starred in Stoned, an ABC Afterschool Special where he smokes a joint and accidentally kills his brother. Two years later, Baio starred in the teen sex comedy Zapped! He grows ultra-powerful hydroponic weed in the school science lab, and it accidentally sends Scatman Crothers on a psychedelic trip in which he dreams of missiles made from his favorite salami.

I’ve never seen you shy away from voicing an opinion that goes against the mainstream. Why you got to be so contrarian?

The idea that essentially everyone on Earth is full of shit and everything they’re peddling to you is full of shit was a hunch I had at age six when I discovered Mad magazine. After meeting “the usual gang of idiots” in those pages, I fully grasped contrarianism as a concept. I saw Mad and got one message loud and clear: “The adults are all lying to you, kid!”

That’s essentially been the life filter ever since. I do believe it’s the best policy.

Sill how contrarian am I, really? In Teen Movie Hell, I name Fast Times at Ridgemont High as the definitive teen sex comedy of its era. I single out American Graffiti and Risky Business as the two best examples of the genre in cinematic terms. These are sort of basic bitch opinions, but the truth is the truth. 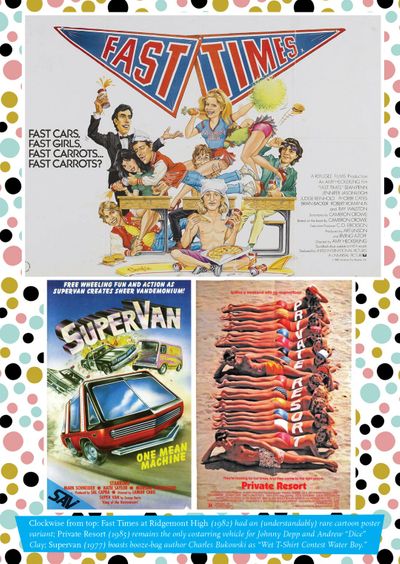 Which Teen Movie Hell movies have the best scenes of getting stoned?

Any one of many moments with Sean Penn as Jeff Spicoli and Eric Stoltz and Anthony Edwards as his stoner surf-bros in Fast Times at Ridgemont High. It’s hard to top that mushroom cloud of weed smoke erupting from their van as they pull into prom.

The joint-passing segment of The Breakfast Club is a triumph in depicting the positive powers of marijuana in group bonding.

Are there any Teen Movie Hell movies that should not be watched while high?

The 1984 movie Surf II is a rather brilliant party flick about über-nerd Eddie Deezen attempting to take over the world by turning surf dudes and party girls into zombies with a mind-control concoction he sells as Buzz Cola.

Indestructible party animal Johnny Big Head (Josh Cadman) goes gut-to-gut with zombified surf-punk Jocko O’Finley (Tom Villard). They chow down on one disgusting, slimy, corroded object pulled out of the trash after another.

What’s the weirdest movie featured in the book?

1982’s Let’s Do It!, written and directed by Bert I. Gordon — a prolific schlock filmmaker. Let’s Do It! is about a college dude who was breastfed too late in life and develops a sexual neurosis that kicks in whenever he gets too intimate with a woman—specifically, he hallucinates himself standing about six inches tall and being threatened by 50-foot naked female breasts. I could see that causing post-smoke spinout. 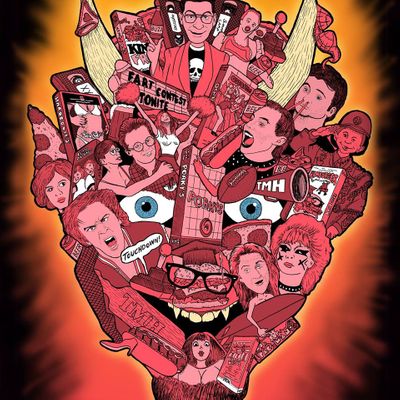 What are the modern era's closest approximations to Teen Movie Hell?

The late ’90s/early 2000s saw a burst of self-conscious throwback movies like American Pie, Varsity Blues, and Road Trip. As a genre, they ran the same course as the original teen sex comedies, only way quicker. In short order, PG-13 rom coms like She’s All That and 10 Things I Hate About You replaced the raunchy stuff. Since then (20 years ago), teen movies have come and gone.

Two of the best coming-of-age comedies I’ve ever seen are both current Netflix cartoon series created by comedians: Bill Burr’s F Is for Family and Nick Kroll’s Big Mouth. Each show is far more knowing than the teen-sex comedies of yore. They also both traffic in absolutely outrageous humor. In terms of raunch, if actual humans were on screen, they’d be rated NC-17.

If you were given the chance to direct a movie with a cast of Teen Movie Hell all-stars in their prime, who would they be?

• Sassy No-Nonsense Heroine—Joyce Hyser (Just One of the Guys)

• Bastard Bully—William Zabka (Just One of the Guys; The Karate Kid) 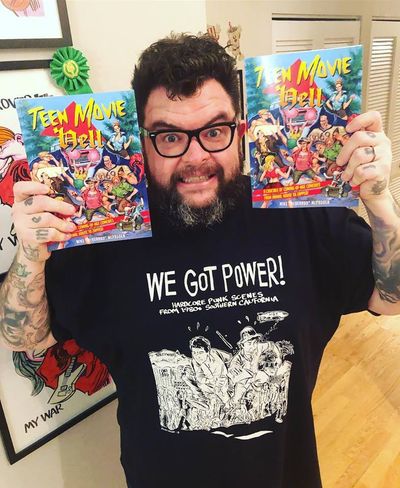 Honestly now: Say you were given the opportunity to go back a few decades and direct that picture. But you would be forced to give up everything you have today and never be allowed to come back. What does your decision-making process look like?

I have a wife I love and two dogs I love. I wouldn’t trade the life I have with them today for anything—including the chance to introduce Traci Lords to Rainbeaux Smith.

Adolescent sexual fixation: How did it form the adult you are today?

I entered puberty at age seven, when I found the April 1975 issue of Playboy buried in my pop’s hamper. I became obsessed with recreating that “blammo!” moment and turned myself into a scholar of pornography while in the second grade at Our Lady Help of Christians elementary school.

I’d seek out and study advertisements for X-rated movies in newspapers and on the street—it was the mid-’70s in New York City. I’d memorize the movie names and try to learn everything I could about them.

It’s tempting to say the impact of these movies on my adolescent sexual fixations was entirely negative. I thought I should be living the life of the kids on screen—a fool’s errand at best, and a suicide mission at its most realistic. I did get some pretty terrific stories out of it. A bunch of them are in Teen Movie Hell. 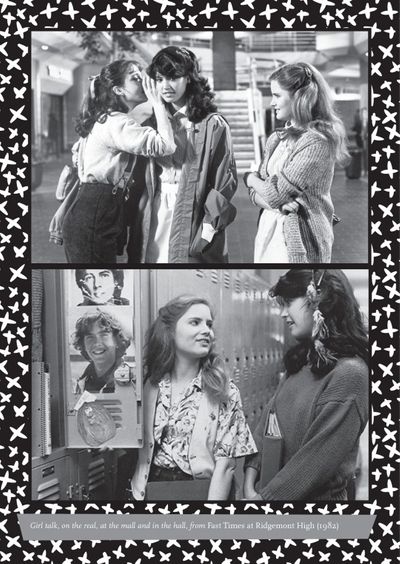 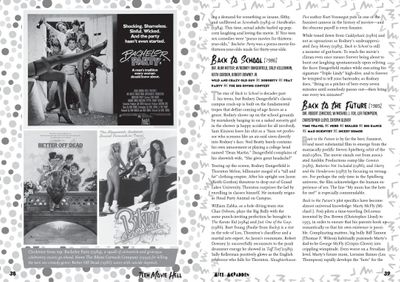 “Teen Movie Hell” is available for purchase from every major and lesser-known online bookseller, and also at real-world stores where books are sold. If you don’t see it, ask for it. You could just make a friend with that exchange.

INTERVIEW
BOOK
HISTORY
MOVIES
MORE...
Allan MacDonell
FOLLOW
Allan MacDonell’s "Prisoner of X" exploited his years running Larry Flynt’s pulp factory; "Punk Elegies" centered on characters and consequences met as a 20-year-old writing for 1970s punk zine "Slash"; and "Now That I Am Gone" is a memoir of his life as it carries on without him. He is currently shopping agents.
Share this article with your friends!
AD
By using our site you agree to our use of cookies to deliver a better experience.
Accept
Decline
MORE FROM MERRY JANE