When I was young, I had to see a psychologist because I had a phobia involving the cats from the musical Cats. Everything about them scared the shit out of me: the creepy makeup, the way they moved, but mostly the skin-tight leotards that revealed their bulging penises and nipples. I actually couldn’t sleep for months because I was scared they’d pop out of my closet in the middle of the night, and I developed an OCD sort of thing where I’d have to repeat the phrase “Please cats do not harm me” seven times before going to bed, or else the cats would kill me. So when I saw that the musical Cats was coming to town last week, I bought a ticket and took a half-eighth of shrooms to see it.

I started feeling the shrooms the moment the theatre lights dimmed. All you could see was a big moon hanging above the stage. I can always tell I’m tripping because shit gets all wavy, and I get a nervous feeling in my stomach. Little yellow eyes started popping up everywhere on the stage. The cats were here and I was feeling fucked up.

No one warned me about this, but the cats actually walk through the audience. I must have not noticed one approaching, because at one point I turned to my right and a motherfucking cat was literally singing in my face, which freaked me out so damn much I almost crapped my pants. The cat was so close to me I could smell its breath; it smelled like a mixture of trash, ass, and pickles.

It was only two minutes into the performance, and my brain was already overheating. 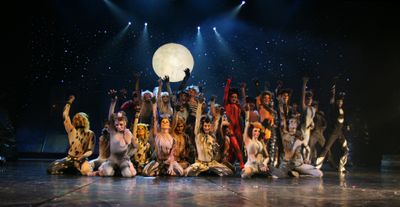 Once the cats crawled back on the stage where they belonged — and the initial wave of the mushroom intensity lessened — I was able to relax a bit and start enjoying the show. All the cats were dancing and singing at this point, rubbing up against each other all horny. I was into it. I couldn’t tell what the fuck they were singing about, but they kept saying the word “Jellicle” over and over again. The song was catchy, and I started swaying to the music in my seat, until the old lady sitting next to me gave me a “I hate you” type of glance.

Anyways, I had no idea what was going on in the play. What was the plot? Like, I couldn’t have told you whether the play was about a cat holocaust — a meowshwitz, if you will — or about a group of cats that cured cancer. I was lost and felt like my brain was melting off. I was begging the universe for a sign about what was going on, at which point the mushroom gods answered my prayers because all the cats stopped moving except for one that walked to the front of the stage and cleared things up for me. He said, “Once a year the cats get together and have a party where some cat called Old Duderonomy picks a cat that’ll get an extra life.” Got it. I was on track again.

Now that we had met a few of the cats, “Old Duderonomy” finally appears. This is the old cat who’s lived like 1,000 lives and will decide who gets the extra life. This old, wise cat comes flying above the audience, wearing what seemed to be a big shag carpet around his body. I wonder if the cat’s costumes smell? They must. All the other cats were basically sucking his dick because they want to be given the extra life. They carry him on the stage and plop him up on a big can of sardines.

Shortly after this scene, the theatre lights came on, which meant it was the intermission. Thank god. I had forgotten that mushrooms make me want to take a shit, so I ran to the bathroom. While on the toilet, I browsed through the program and realized the old cat’s name wasn’t “Old Duderonomy” but “Old Deuteronomy,” which was slightly disappointing. 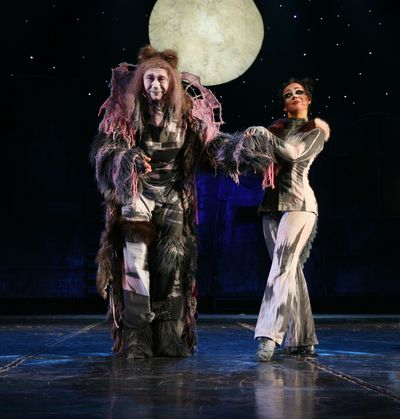 Alas, I took my seat once again, and bumped the knee of the old lady sitting next to me. She looked at me like she wanted to murder me. Old Deuteronomy literally sat on the stage the entire intermission and just watched people eat their theatre snacks, which I thought was kind of cool.

When the play resumed, they KEPT ON INTRODUCING MORE CATS. There was Gus the theatre cat who made me depressed, Skimbleshanks the cat who’s obsessed with trains for some reason and carries a pocket watch, and McCavity, the cock-tease cat whom all the cats won’t shut up about but only appears on the stage for two seconds.

I was ready to not be introduced for any more cats, to be honest. I’d had enough. Grizabella then comes back on stage and sang “Memories,” the one song we all know from Cats. This part really got me. I started sobbing like a child. I mean, I was inconsolable. When I looked over to the old lady that hated me, I realized she was sobbing, too. It was stunning. We both looked at each other and embraced. Truly a magical theatre moment. Grizabella's depressing song seemed to make Old Deuteronomy pity her, because he chose her as the winning cat, leading to her floating above the stage and disappearing into cat heaven or something. All the cats seemed really happy for her, and they rejoiced — as did I and my new best senior citizen friend sitting next to me.

The play ended and got a standing ovation. I felt totally insane and contemplated sneaking backstage to meet the cats, which I’m so glad I didn’t do. When I was back in the lobby, I paid $25 for a photo with a random cat from the cast. He was sweating profusely. When I reached over to hug him for the picture, he leaned into my ear and said “I’m sorry about all the sweat.” 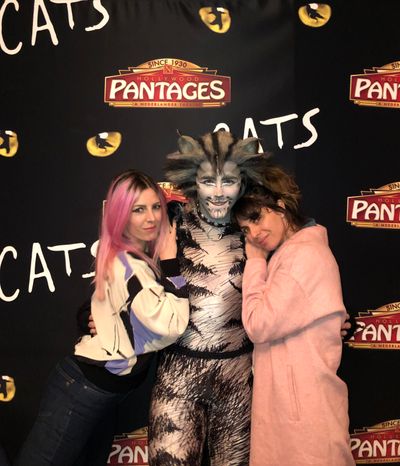 420
HUMOR
CULTURE
MAGIC MUSHROOMS
MORE...
Tamara Yajia
FOLLOW
Tamara Yajia is an Argentinian-American comedian, writer, and actress. She currently lives in Los Angeles and writes for ClickHole and Funny Or Die.
Share this article with your friends!
AD
By using our site you agree to our use of cookies to deliver a better experience.
Accept
Decline
MORE FROM MERRY JANE