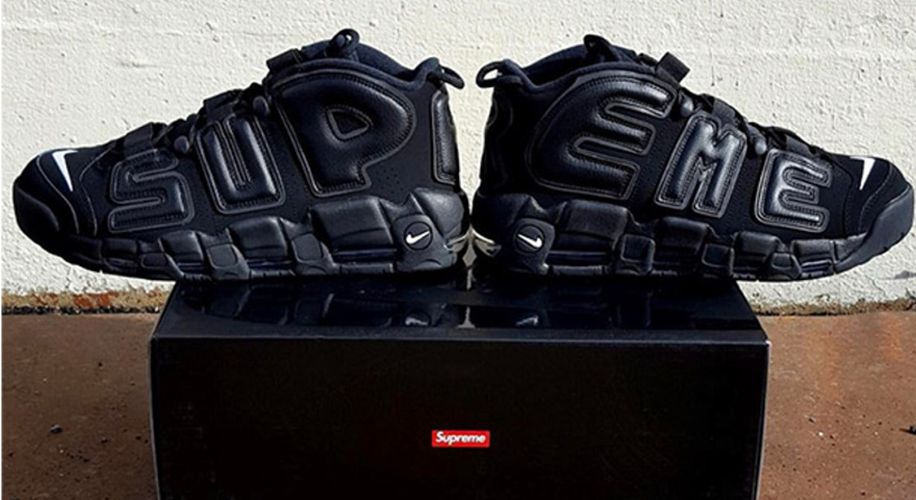 Two ‘90s icons rolled into one.

Two ‘90s icons rolled into one.

Supreme is known for their highly coveted footwear and apparel collaborations. One of their upcoming releases, a take on the iconic Nike Air More Uptempo, looks to be yet another gem in the crown of the “Kings of Streetwear.”

With the New Year comes new drops, and this murdered-out take on the sneaker made famous by six-time NBA Champion and Olympic gold medalist Scottie Pippen is one that will have bots working harder than ever and Supreme retail store lines the world over wrapping around block after block.

Images have been scarce, and folks have had to settle for Photoshop renderings until leaked images finally emerged. The shoe looks to be mostly all black with minimal contrasting Nike branding found on the heel and toe. The large “AIR” letters usually found on the model will be replaced by the word “SUPREME” sprawling across the side panels of both shoes.

While it appears that the black colorway is confirmed, there have rumors of other colorways, including blue, gold, and red. There has even been an image circulating that depicts a traditional version of the Air Uptempo in desert camo, a motif commonly seen in Supreme apparel and footwear releases.

No release info has been provided yet, but look out for these to drop in the near future.