CULTURE
Stoned Sex: Can You Date Someone Who Doesn’t Smoke Weed?
AD
Dating is complicated. But what if you fall for someone who doesn't use cannabis — like, at all? Can it still work out? We think yes. But here's what you need to know about this type of relationship.
Published on August 29, 2019

For this week’s edition, we’ll be discussing the ins-and-outs of cannabis lovers dating people who don't smoke weed. Is it possible? Or is the relationship destined for doom from the start? 'Stoned Sex' will be running every other week, so make sure to stay tuned for the next dose.

“I don’t smoke weed,” my Tinder date told me. “It gave me a panic attack in college and I haven’t touched it since.”

Ruh-roh. It was the first date, and I was feeling mellow-as-can-be on 10mg of edibles. Should I flash her my medical card to validate my cannabis use? Is she not the one for me? Could I convince her to give cannabis a well-deserved second shot, or was that pushy?

Most weed users experience an encounter like this while dating. Sometimes, non-smokers experience their bizarro version of the very same sitch. If the person is rude — good riddance, weed nazi! But what if they’re cool and you want to keep seeing them? Can your canna-incompatibilities survive long-term? I asked cannabis and relationship experts, in addition to fellow potheads who have been in my shoes, to answer the stoned age question: Can a regular cannabis consumer date someone who doesn’t smoke weed? 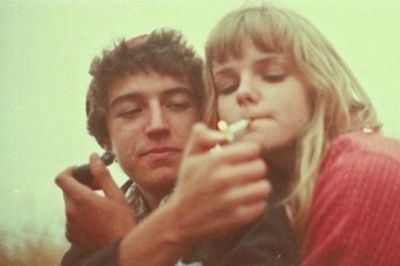 We all know the stats: Cannabis is responsible for no deaths, while 88,000 people die annually in the US from alcohol-related fatalities. For medical patients like me, cannabis offers a less-addictive and plant-based option to calm pre-date jitters. Or relationship post-mortems. And while pharmaceuticals have their place, sometimes meds (like Xanax) can be too much before a first date.

But you don’t need a medical excuse to use cannabis. There’s nothing wrong with imbibing simply because it feels good and works for you. But keep in mind that marijuana remains a Schedule I drug. And the lingering stigma from the War on Drugs doesn’t help either. So, while I don’t think twice about if I’m using cannabis to mellow-out before a date — or if I’m using it because I simply fucking love weed — my date might. And that’s definitely something to consider.

“I think probably every single client that I have worked with has faced some judgment or stigma in the past when it comes to cannabis,” said cannabis-friendly matchmaker and dating coach Molly Peckler, founder of Highly Devoted. “It’s really unfortunate, because when you face that judgment, and you’re worried that someone looks at you as a drug addict or just less than, you’re not going to share your full self with them. You can’t be true and honest and communicate openly.” 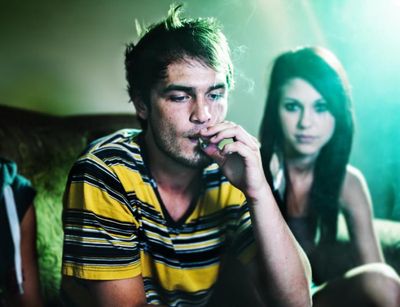 Non-Judgement Is Crucial to Dating a Non-Cannabis User

According to sex and relationship therapist David Ortmann, it’s quite possible for a cannabis lover to date a non-cannabis user, as long as there’s communication, understanding of the medicine, and mutual respect.

“The way people deal with a discrepancy in marijuana use is often how they will deal with other discrepancies in their relationship,” Ortmann said. “It comes down to communication.”

So if you’re a habitual user falling for someone who doesn’t partake, how do you tell them? Ultimately, it’s up to you. On one hand, Ortmann reminds us that marijuana is a medicine, and just like any other medicine, it’s not necessarily anyone else’s business how you take care of yourself.

“I don’t [judge] a person based on if they’re taking antidepressants or not,” he says. “That goes for marijuana, too, because to me it’s just another medication.” In other words, your body and your medicines are your business.

On the other hand, if it’s a relationship with a future, or cannabis is a major part of your life, keeping it a secret is going to be tough. Ortmann recommends acting normal about it. There’s so much power in being authentic. If you make it a big scary deal, your pot-abstaining love interest will also take it as a big deal.

“We’re still getting over this stigma around psychedelics,” Ortmann said. “People are so judgmental. Be very direct and don’t make it anymore loaded than it has to be.” The only time it should be a big deal is if you’re using in a manner that’s hurting yourself or others.

Some cannabis users, such as Melissa A. Vitale, a 26-year-old publicist who often works with the weed world, believe there are advantages to dating people who consume less weed. “I actually enjoy not dating a smoker. You never have to worry about anyone smoking your stash, or if you go on a date, you don't need to worry if you brought enough weed for both of you. But my favorite times were when he would ask for a hit of my joint.”

According to psychologist and sexologist Dr. Denise Renye, it all comes down to respect. “If people have allowance for the other person to be themselves, in substance use and beyond, then the relationship can be successful,” Dr. Renye said. “But once judgments and expectations enter the scene, it’s really an issue for both parties. The relationship tends to be less fun and more about nitpicking and trying to control the other.” 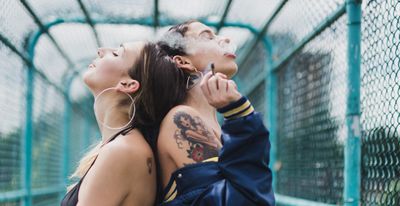 There Are Benefits to Dating a Fellow Stoner

While we shouldn’t cut off a chunk of the population as potential dates, dating someone else who loves weed does expand the opportunity to bond emotionally, spiritually, sexually, and simply enjoy 420-friendly dates. I mean, what’s not to like about stoned sex, stoned vacations, stoned concerts, and stoned days consisting of Netflix and chill? There’s something to be said about sharing interests.

“To be able to enjoy a joint, to cook an infused meal together, these are things that you can really enjoy,” Peckler said. “When you’re both in the cannabis mindset it truly is a heart opener, walls come down. Cannabis tends to make people more empathetic and understanding.”

In addition to shared activities (and orgasms), two 420-friendly singles may share a similar world viewpoint. Cannabis is a plant that encourages expansion of the mind, and facilitates creativity. And it has a massive impact upon people who use it. “It may get into different levels of open-mindedness and fluidity in the world,” Dr. Renye said. “So it may even speak to something bigger than, 'I like to smoke a bowl and you don’t.'”

Now for the big question: How do you offer someone cannabis who, perhaps, had a negative experience with schwag weed years ago, without making it a pressure situation? We should try everything twice, right? Thankfully, weed is more than THC, so there are creative ways for non-users to get in on the fun.

“It doesn’t have to be a joint, it can be a CBD tincture or a topical; offer to give them a massage" using CBD-infused oils, Peckler said. “If after you do that, you’re still facing that judgment... then you have to ask if you want to keep the relationship going.”

When it comes to dating a non-cannabis user, the dealbreaker comes down to judgment. Are they willing to let you do your thing, even if it’s not for them? A relationship should be a judgment-free zone, especially when it comes to self-care, mental health, and (responsible) recreation. And while it didn’t work out with me and the woman who wrote off weed because it made her anxious, that doesn’t mean I’d refrain from dating someone who doesn’t partake. At the same time, my activities and preferences shouldn't dictate how others approach dating. On one hand, our choice in lovers is a personal decision. On the other hand, we don’t always choose who we fall in love with. So keep an open mind.

420
SEX AND ROMANCE
CULTURE
STONER
MORE...
IN THIS STORY
CBD
Click to shop at our CBD store
Sophie Saint Thomas
FOLLOW
Sophie Saint Thomas is a writer based in Brooklyn. She was raised in the U.S. Virgin Islands. Along with Merry Jane, her writing has been published in VICE, Cosmopolitan, Marie Claire, High Times, Nylon, Playboy, GQ, Harper's Bazaar and more. Brooklyn Magazine included her on their annual 2016 30 Under 30 Envy List. Her favorite strain of weed is Grand Daddy Purp.
Share this article with your friends!
AD
By using our site you agree to our use of cookies to deliver a better experience.
Accept
Decline
MORE FROM MERRY JANE