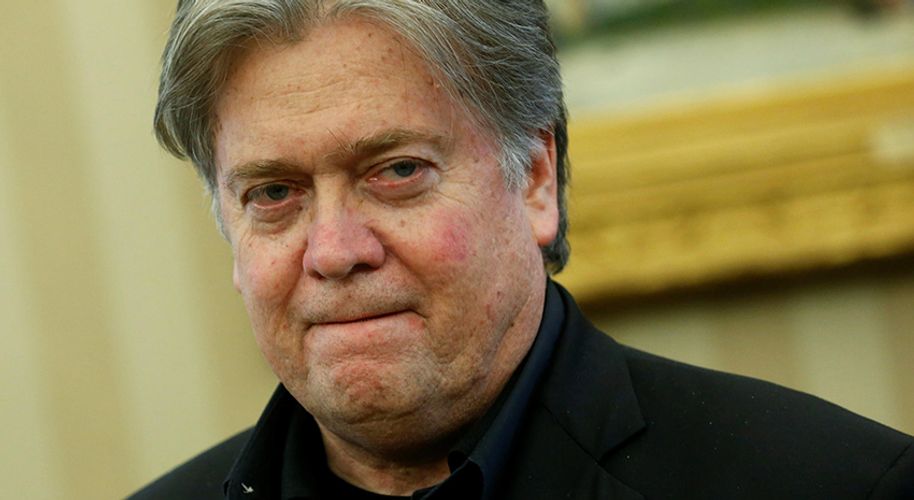 How Steve Bannon Rode White Nationalism to the White House

Understand the devil in the details of Trump’s disgusting policies.

Understand the devil in the details of Trump’s disgusting policies.

There’s a saying in Hollywood that overnight successes are decades in the making. The same, for better or worse, is true of politics. Though Steve Bannon is a name that is newly terrifying many Americans, Bannon’s rise to become President Trump’s chief advisor and the architect of the heinous Muslim ban has been years in the making. As he prepares to take his unprecedented position on the National Security Council—a move that has been condemned by the left and the right—people are asking, “Who the hell is this asshole?”

Many profiles of Bannon have focused on the quirkier details of history. For some reason, we’ve taken to profiling neo-Nazis and white nationalists the same way we profile seasoned character actors, focusing on the quirky and odd experiences that shaped their bigotry. While Bannon’s time in the Navy, working for Goldman Sachs, and making deals in Hollywood shaped who he is—and earned him a producer credit on Seinfeld, though you’ll be happy to know his involvement was entirely financial—may be interesting, they are also generally irrelevant.

What actually matters now is how Bannon capitalized on an isolationist, nationalist moment to seize power and begin to enact the previously unthinkable. Though he has been quoted calling liberal women “a bunch of dykes that came from Seven Sisters schools,” referring to Jewish children as “whiny brats,” and proclaiming that only property owners should be allowed to vote, what’s interesting isn’t how Bannon became a racist piece of shit. What is interesting is how this racist piece of shit came to have so much power.

When you read profiles of Bannon, you see two key moments of political awakening. The first is back in 1980, when a young Steve Bannon admired Ronald Reagan so much that he talked his way into his election night celebration. The second came in the build-up to and aftermath of the 2008 election. An Alaska governor named Sarah Palin had suddenly made folksy populism peppered with racist dog whistles popular, and Bannon saw an opportunity. A self-proclaimed outsider, Bannon rose from somewhat working-class roots to attend Harvard, work for Goldman Sachs, and become a Hollywood producer.

As with most working-class people who have risen into the upper crust, this brought about some level of class consciousness. Sadly, in Bannon’s case this warped itself from the kind of conservatism that is palatable to mainstream America to the incendiary rhetoric of Breitbart. By 2013, he was saying things like, “I’m a Leninist. Lenin wanted to destroy the state, and that’s my goal, too. I want to bring everything crashing down, and destroy all of today’s establishments.” Let’s be clear that he’s interested in Lenin’s destructive impulses, not the ideas about giving money to the poor and ending capitalism, in case you were thinking Bannon might pass universal health care. As with most former Goldman Sachs men, Bannon likes capitalism just fine. Bannon has basically the same story as your racist uncle, completely with the same delusional, destructive impulses, and hatred of the immigrants. Unfortunately, Bannon happens to have had a lot more economic success than your racist uncle.

This fascination with Palin bloomed into an obsession. Bannon saw Palin’s obvious shortcomings: While Trump comes off as dim, Palin can’t finish a speech without revealing herself as functionally illiterate. But Bannon rightfully saw something appealing in Palin’s position. He spent the next eight years after meeting Palin making films about her and populists like her who emerged from the Tea Party movement. At times he put his faith in Michelle Bachmann; at times he put his faith in Ted Cruz; he considered Rick Santorum, Ben Carson, and even Lou Dobbs. Every one of them came up short until he found his “imperfect vessel” (his words, not ours), Donald Trump. In 2011, the two men met at Trump Tower; the Donald was already considering a presidential bid, and Bannon was already looking for a horse he could ride to the White House.

At the time, this seemed like a quixotic journey to most observers, but in jumping from Tea Party hack to Tea Party hack, Bannon continued to make connections and gather influence. His journey through these political circles ultimately put him in touch with Andrew Breitbart. The two shared an interest in joining populist economic anger with racial animus. He went to work for Breitbart’s white nationalist mouthpiece website and took over the publication after Andrew’s death in 2012.

That year brought with it another key development in Bannon’s political rise. After Mitt Romney’s loss, a post-mortem was issued by the Republican Party. The conclusion was that the party was going to have to bend on immigration. The GOP was never going to win again if it didn’t appeal to Latino voters. Jeb Bush, Ted Cruz, and Marco Rubio all took this message to heart, going as far as to challenge each others’ Spanish-speaking skills on the campaign trail. Bannon took a different lesson, and thus saw a different opportunity. Rather than preserving Republican business orthodoxy and bending on racial and social issues, he could modify the GOP business message and double down on nationalism and white supremacy. He was right.

In the years running up to the election, Breitbart made sure to run pieces demonizing Mexican immigrants, fearmongering about inner-city crime, and marrying economic anger to anti-Semitic messages. Breitbart gave a platform to the so-called Alt-Right (a collection of neo-Nazis and neo-Nazi sympathizers) online. He was also careful to stick to his economic message. At a 2010 Tea Party gathering, he told the crowd, “In the last 20 years, our financial elites and the political class have taken care of themselves and led our country to the brink of ruin … [It is] the people who fight our wars, pay our taxes, run our civics organizations, and build our cities who hold our neighborhoods together.” This was the one-two punch that drove Breitbart’s leadership and set up Bannon’s political lane.

Breitbart didn’t sway the election on its own, but it did give Bannon a test case for what he believed was the key to victory. He had a blueprint that might work on a national scale. As the New Yorker’s Ryan Lizza put it, “He believed that Clinton was weaker with Hispanics, African-Americans, and white Millennials than Obama was in 2012. And he believed that with a surge of white working-class support, Trump could win Wisconsin and Michigan, which had voted Democratic since the 1980s. He was right about all of this.”

Bannon has so much power today largely because he went against the grain of Republican orthodoxy at a specific moment. He was in the right place at the right time. People who have a knack for this generally appear like geniuses. Many profiles of Bannon would have you believe the man is a genius because he’s read Plato, Marx, and once conceived of a rap musical based on Shakespeare’s Coriolanus. Like most evil people, Bannon seems to be boring, and not nearly as smart as he thinks he is. It is easy to shock people when you behave like a bull in a china shop, but eventually the shop owners and the customers want some of the dishware to remain unbroken. In addition to being evil, his implementation of the Muslim ban has been derided as logistically awful and politically stupid, even from the Right. Capitalizing on peoples’ fear is easy to do, and never works forever. Here’s hoping it stops working before too many people get hurt. Steve Bannon isn’t Emperor Palpatine or Dick Cheney. It’s only a matter of time until he squanders the power he’s claimed for himself. After all, the inspiration for his political moment was Sarah fucking Palin.