CULTURE
South Park Trashes MedMen (Again) in the New Season Premiere
AD
“When you grow your own pot, you’re taking weed out of my children’s mouths!”
Published on September 26, 2019

On Wednesday night, the 23rd season of South Park premiered with the return of Randy Marsh and his fictional weed company, Tegridy Farms. Last season, Tegridy made its debut as the small pot operation that values, well, values over profits — ad nauseum. But this time around, Randy gets seduced by the greedy corporate execs from MedMen, a real-life California-based dispensary chain that’s made headlines for employing non-woke bros, hemorrhaging millions of dollars , and lobbying to get legal weed home grows banned in New York state.

By the start of the season premiere, titled “Mexican Joker,” Randy has already fallen under the sway of legal weed’s wild financial success. Randy no longer just sells no-frills weed, he also provides guided tours of his farms — fully staffed by Latin American immigrants — and Tegridy’s weed processing facility. His tiny farmhouse operation has expanded to cover the entire “420 Valley,” a real area in Colorado that hosts a massive weed growing complex. Then, a South Park local tells Randy that he hasn’t been buying Tegridy’s weed because he’s now growing his own.

“What do you think?,” said Steven, Randy’s toking neighbor. “I started growing my own plants a couple of weeks ago.”

“Come on! Growing marijuana is not your idea.”

“Yeah-huh! While you assholes were out screwing around, I went out and made a living! When you grow your own pot, you’re taking weed out of my children’s mouths!”

Then another local tells Randy the same thing, that he’s growing his own these days, too. Then another. And before we know it, Randy Marsh’s ‘tegrity gets called into question: He sees home grows as a threat to his swelling profits, and he’ll be damned if some amateur gardeners are going to carve a chunk out of his business. While Randy goes on rampage against home grows, he’s approached by the executives of “a billion-dollar marijuana company,” MedMen.

“You seem to be fighting the same fight we are,” says one of the suits before hitting a joint and passing it. “We just want to help you. We have a common problem: Homegrown weed.”

“We’re just worried about safety, you know,” the other MedMen rep says while puffing the j. “Babies drowning in irrigation and such.”

“Yeah, I hate watching babies drown,” Randy replies during his turn to toke. “Seems like a waste of a good baby.”

After ripping the joint harder than Snoop did in Half Baked, Randy adds, “So, you guys wanna put our money together, and fuck this town up so nobody can ever grow their weed again? I’m totally in.” 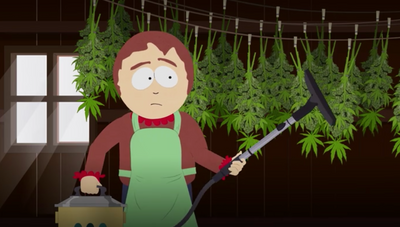 In real life, MedMen took part in a lobbying effort to ban legal home grows in New York. Since then, MedMen has claimed that it does not oppose home grows, but simply offered the ban as an idea and was willing to revise its position, according to Marijuana Moment. The company has criticized legal home grows as a cover for black marketeers, yet cannabis activists have fought — and continue to fight — for adults’ right to grow their own.

That’s because some patients are incredibly sensitive to pesticide residues that often linger on legal buds. And while every dispensary claims they’ve got genuine genetics for every strain they carry, the only way for patients to ensure they’re consuming the strain that works best for them is to grow it themselves. At home. And the same goes for patients without easy access to local dispensaries or cannabis delivery services.

Of course, South Park rarely tackles just one hot-button political issue in an episode. “Mexican Joker” contains three paralleling plotlines, of which the Tegridy Farms/MedMen arc is just one. While Randy’s wrangling the home growers, Kyle, who’s Jewish, gets sent to an ICE concentration camp for kids. And somewhere along the line, Kyle’s metaphorical speech warning that the feds will inspire a “Mexican Joker” — a play on the homicidal clown villain from the Batman franchise, whose upcoming film is already riling both mass-shooting-glorifying incels and die-hard gun-control advocates — gets twisted by ICE and Border Patrol agents as a real conspiracy that “threatens our national borders, and security... of our jobs.”

Will Kyle escape from the clutches of the ICE detention center? Is Mexican Joker real? And will Randy and his newfound allies at MedMen stop South Park’s denizens from growing their own weed? To find out, catch the full episode at Comedy Central’s South Park website. And get some fuckin’ Tegridy, already!

NEWS
TELEVISION
CULTURE
POP CULTURE
MORE...
Randy Robinson
FOLLOW
Based in Denver, Randy studied cannabinoid science while getting a degree in molecular biology at the University of Colorado. When not writing about cannabis, science, politics, or LGBT issues, they can be found exploring nature somewhere in the Rocky Mountains. Catch Randy on Twitter and Instagram @randieseljay
Share this article with your friends!
AD
By using our site you agree to our use of cookies to deliver a better experience.
Accept
Decline
MORE FROM MERRY JANE