CULTURE
Snoop Dogg’s Madden Madness Returns This Week for GGL VIII
AD
The last time the Gangsta Gaming League paired up players in teams of two, the competition got hella heated. And this week, Snoop and his pals are back for another round.
Published on November 19, 2019

Just in time for the Thanksgiving holidaze, MERRY JANE’s Gangsta Gaming League (GGL) returns this Wednesday, November 20th for the eighth installment of our live eSports tournament, featuring Snoop Dogg, his crew of life-long homies, and some new surprise additions.

In addition to the usual suspects, special guests and pro-gamers Nikan from Faze Clan and ibestrafing will also join the competition just to keep things spicy. And, last but not least, the event will be hosted by the great Hollywood Gene. 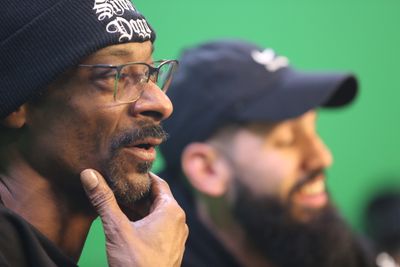 In the previous GGL, players grouped up in teams of three for the first time. And, to everyone’s surprise, Snoop’s team with DanRue and Waniac (of The Twinz) didn’t claim the champion’s trophy. That honor went to Tecmo Bowl, Young Sagg, and Eric Vidal (of Dash Radio’s Baker Boyz) instead. In the past, Snoop has claimed the GGL crown for all but two GGL tournaments.

For GGL VIII, the games will return to the 2-on-2 format, which was first introduced during GGL VI. Our presenting sponsor, the DIY home-grow AI unit Seedo — along with BirthJays, Daily High Club, and Smoke Savage — will be on location to provide treats, eats, and swag galore.

Will Snoop and TDap defend their two’s title as the Kings of Madden, as they did after GGL VI? Or will a new pair emerge victorious after a nail-biting finale on the turf?

Find out when the games kick off tomorrow, November 20th at 4pm PST. You can watch the GGL VIII livestream on Snoop’s YouTube, Twitch, and Mixer channels, as well as MERRY JANE's own Facebook page.

And if you missed it last time, you can also catch highlights from the last uber-epic GGL tournament below!

NEWS
VIDEO
VIDEO GAMES
EVENT
MORE...
MERRY JANE Staff
FOLLOW
MERRY JANE is based in Los Angeles, California and is dedicated to elevating the discussion around cannabis culture.
Share this article with your friends!
AD
By using our site you agree to our use of cookies to deliver a better experience.
Accept
Decline
MORE FROM MERRY JANE