CULTURE
Snoop Dogg’s Chicken Wings Are Available Across the USA Thanks to the "Wing Showdown"
AD
Snoop, Shaq, Tyra Banks, and other celebs are making chicken wing masterpieces to benefit charities — and you can order these delicacies for the next five days.
Published on July 29, 2020

Snoop Dogg is beloved all over the world. He’s revolutionized hip-hop and turned how we get high into a transcendental art form that continues to uplift humanity. Now, kicking off on National Wing Day, Snoop is sharing the mastery of yet another one of his passions: Chicken wings.

The Wing Showdown is a digital food competition brought to life by Off The Menu and Uber Eats that’s running between July 29 and August 2, 2020. Snoop is one of the celebrity participants and, in celebration of this delicious holiday, he’s sharing his personal wing recipe with chefs and restaurants in NYC, LA, Chicago, Atlanta, Dallas, Austin, Houston, Denver, Toronto, and Vancouver. 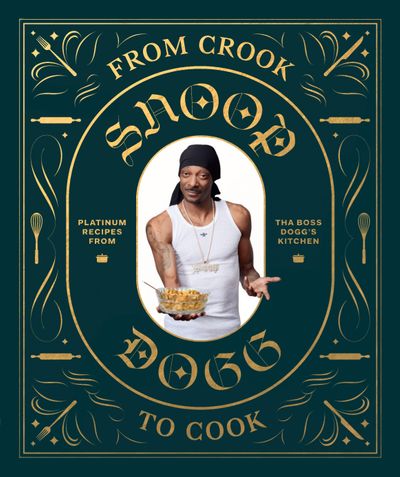 The Wing Showdown was inspired by a prior celebrity Off The Menu event called The Burger Showdown, in which celebs grilled an array of exquisite burgers. So, then, how did wings get the call this time instead of, say, pizza? Or dank-ass nachos?

The short answer is that wings are simple enough to pull-off at home. You don’t need a lot of ingredients, time, or kitchen space to make ‘em happen. “I knew there was an appetite for chicken wings, and they are such a versatile food that celebrities love,” said Lawrence Longo, the CEO of Off The Menu, a business that makes secret menus for restaurants, bars, and cafes, that’s responsible for making this event happen. “It was the perfect food item for the next Showdown.”

But, getting Snoop Dogg to participate in your event is basically like trying to convince the Pope to come to your birthday party — unless chicken wings, Snoop’s favorite dish, are involved. “After reading [Snoop’s] cookbook From Crook to Cook, I knew I had to do something cool with him in the food space,” Longo said. “What’s really cool about Snoop’s involvement is that, for every wing sold, Off The Menu is donating a portion of the proceeds to Snoop’s Youth Football league.” 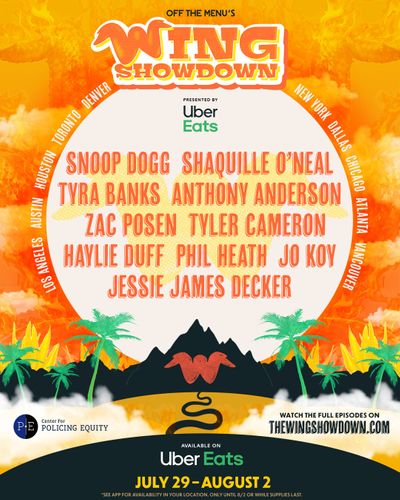 Fans will be able to sample each drool-worthy entry by ordering from the participating restaurants listed at TheWingShowdown.com from July 29-Aug 2, 2020. Afterward, those dining can return to the site and vote for their favorite dish. When the results are tallied, funds will be donated to the Center for Policing Equity (CPE) in the name of the celebrity who gets the most votes. The CPE is a research and action organization that reduces the causes of racial disparities in law enforcement and uses evidence-based approaches to create levers for social, cultural, and policy change.

It’s honestly a winning prospect for all involved. Beyond a fiesta for your taste buds and a chance to support a dynamic charity, each order will also directly benefit local dining spots and related businesses.

“Our digital Showdowns have two main goals,” Longo said. “The first is to drive sales to local restaurants. The second is to give back via charitable partners whose missions align with values we hold close. Just like food brings people together, our mutual support will help fuel the ability to bring communities and police chiefs together for reforms that everyone can get behind. Off the Menu invites you to join us in showing that our wing-loving community stands together against racial injustice.”

What better way to show unity than through celebrating the simplistic bliss of delicious wings? In a lot of ways, chicken wings are like art: The meat is the canvas and the sauce is the paint that gives a dish its distinct essence. “We saw a lot of people creating recipes based on their upbringings,” Longo said. “For example, Jo Koy is doing a Filipino adobo style chicken wing, which looks dope. Tyra Banks is doing a sriracha-maple flavored wing — I’ve tried that one, and it’s incredible.”

But, really, is any contender going to hold a drumstick to Snoop? Just consider how high chicken wings rank among stoner cuisine and the fact Snoop has spent years baking (in every sense) with legendary kitchen queen, Martha Stewart.

“Snoop’s ‘Chip Fried Chicken Wings’ are probably the most creative wings in the event,” Longo said. “It’s the perfect recipe for a chicken wing competition. Snoop uses potato chips in his batter. Everyone is going to absolutely love them!” 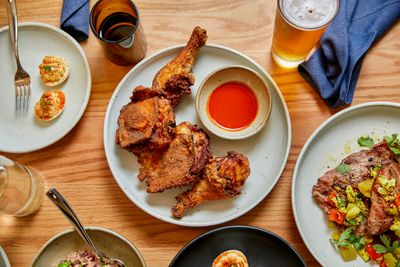 Chef Daniel Patterson of Los Angeles-based restaurant Alta is thrilled to be involved with the Wing Showdown. “Snoop asked for Alta to be one of the three restaurants in L.A. making his chicken wings,” Patterson said. “We love the flavor that the potato chips add to the coating. We’re including our favorite new hot sauce, Red Ranch, with each order of wings. It’s killer with all kinds of stoner food!”

One game-changer about this year’s Showdown is that weed is now legal in a number of participating cities.

“I think the legalization of marijuana has given everyone a legal reason to be hungrier, and that makes people want to discover more new food,” Longo said. “Every meal tastes way better when you’re stoned. Chicken wings are the perfect stoner food, so we hope customers will watch the recipe videos online and then order. The event goes on for five days, so you can try a lot of different wings.”

Now that burgers and wings are checked off the list, what stoner dish will be at the center of the next celebrity Showdown? “Tacos, pizza, and sandwiches are all in the works,” Longo said. “We also do an event called Tenderfest, which is half festival, half tender museum. It’s an epic experience!”

Visit TheWingShowdown.com to watch videos from the celebs involved and to cast your vote (for Snoop, of course!).

This was created in partnership with Uber Eats, Off the Menu, and Alta.

MUNCHIES
NEW YORK
TEXAS
ADVERTORIAL
MORE...
MERRY JANE Staff
FOLLOW
MERRY JANE is based in Los Angeles, California and is dedicated to elevating the discussion around cannabis culture.
Share this article with your friends!
AD
By using our site you agree to our use of cookies to deliver a better experience.
Accept
Decline
MORE FROM MERRY JANE