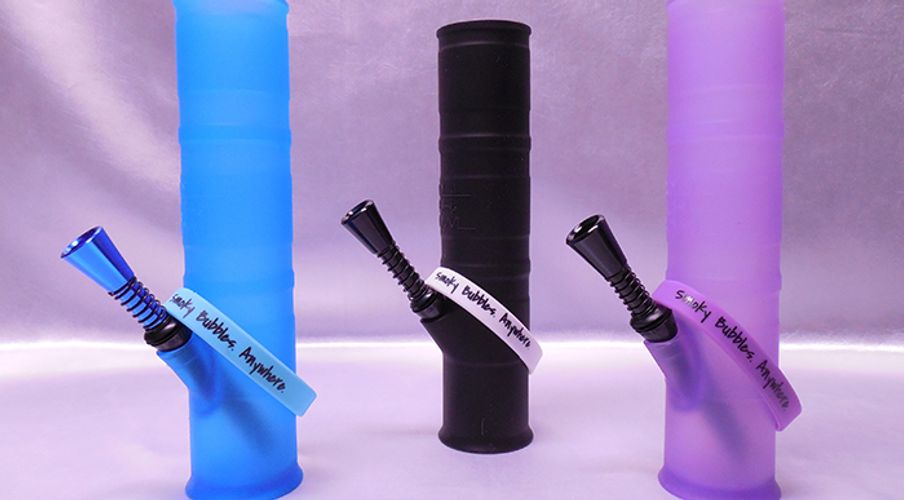 Do Silicone Smoking Accessories Live up to the Hype?

Who says using rubbers is no fun?

Who says using rubbers is no fun?

I can’t be the only one who seems to have bum luck when it comes to glass bongs, right? No matter how careful I am, inevitably my glass pieces end up breaking. A bowl, an entire bong, a slide, a downstem. No matter what, it happens. And it sucks. Not only do I end up losing a smoking accessory, but I then am also tasked with cleaning up a bunch of glass and stinky bong water. So, in the interest of bong-users everywhere, I decide to try out the latest trend in smoking accessories: silicone! Perhaps this non-breakable material would be the answer I was looking for.

The fine folks at Roll-uh-Bowl sent me a package with a bunch of goodies to help me in my quest to see if silicone would work for me. I received a BiG RuB and a smaller one, both in black. The thought behind these particular foldable, portable silicone bongs is pretty simple. “Our team are all outdoor enthusiasts,” explains company executive Ashton Jones. “We wanted to create something that would go hand-in-hand with our active lifestyles. We got tired of breaking our nice glass pieces when we were out on adventures. We came up with the idea to create something that was durable and affordable, yet foldable and portable, that could easily fit into a ski jacket or backpack without worrying that it will break.”

Despite the sales pitch, I had some reservations up front. One thing I love about glass (despite its penchant for inevitably breaking on me) is the heft of it. A heavier piece in your hand feels more secure for some reason. I was worried that the floppiness of the silicone would feel weird and alien.

I also wondered if there’d be a scent, and if so, how that would translate to my cannabis. Would it smell or taste rubbery? Would the scent of the cannabis infiltrate the silicone and trap it, causing it to stink after only a few uses?

Silicone means the Roll-uh-Bowl can indeed roll up for easy transport. Image via Roll-uh-Bowl

I’m pleasantly surprised to share that my fears were unfounded. Yes, it was a bit strange to hold the Roll-uh-Bowl in my hand at first, but after a while it felt totally normal. There was a slight rubbery scent to start, but it quickly dissipated. After that it was a normal bong experience—except that, if I had dropped it, it wouldn’t have broken!

Due to the malleable material, adding ice to the Roll-uh-Bowl was incredibly easy and it didn’t get stuck going down, as can occasionally happen with my glass bong. Plus, it came with a nifty stainless steel “eject-a-bowl” and downstem that made packing and puffing easy.

My one nitpicky complaint is that, because the Roll-uh-Bowl I tested was black, I wasn't able to see how filled the chamber got before pulling out the eject-a-bowl. That gave me some surprisingly big hits, and perhaps even wasted some of the smoke I couldn’t fully inhale. That might not be a problem with the lighter colored pieces, however. And, in the grand scheme of things, it honestly isn’t that big of a deal. More of a minor inconvenience, especially if you have teeny, tiny lungs like me. With use, you’d gain a better feel for how much smoke a pull produces and learn to control that.

I personally did not have a chance to head out into the world with the smaller, more portable Roll-uh-bowl, but I did lend it to somebody who took it on a long hike. He reported back that it was an excellent smoking accessory, and one that he would definitely take with him again. He appreciated the foldability and let me know that it did not retain a pungent post-smoking smell at all. (If smell were ever an issue, you could easily clean silicone with soap and water and it wouldn’t slip out of your soapy hands and break in the sink, like glass sometimes does.)

All in all, I came away from the test impressed by silicone. So, the next time you’re in the market for a new bong—because, you know, you totally shattered your glass one—why not check out a silicone one? It might just be your new favorite accessory.