CULTURE
Shlohmo on the “Hopeful Doom” of His New Album, "The End"
AD
"It’s hard not to think of the apocalypse in times like these. But I like to imagine it though from the perspective of doomsday cults who celebrate it."
Published on March 25, 2019

The contents of the deluxe edition of electronic musician Shlohmo’s new album paint quite a telling portrait of the music within. The End (out today via Friends of Friends/Wedidit) is a vaguely apocalypse-themed hour of instrumental music, so fittingly, the package includes a shirt emblazoned with “The End is Near.” However, that message is rendered less depressing by the other items that accompany the shirt and double LP. Mod-style sunglasses, a hot pink bob wig, and custom rolling papers may not scream “doomsday” in the traditional sense — but then again, neither does The End.

If you only know Shlohmo from his extremely lit early Boiler Room DJ sets, his remixes of popular rap songs, or his steamy collaborative work with R&B great Jeremih, his new album will sound more nightmarish and epic than you’re used to. But if you’ve been keeping up with the 29-year-old Angeleno’s solo albums, The End isn’t an abrupt departure. This guy titled his first full-length Bad Vibes; he knows his way around a bleak soundscape.

In many ways, The End isn’t even as heavy and abrasive as its direct predecessor, 2015’s Dark Red, which Shlohmo says was made during a time in which he was dealing with “death and illnesses” in his family. If that album sounded like going through a traumatic experience and then learning how to cope with it, The End sounds like being so skilled at coping that when you look out of the window and see a mushroom cloud, you’re able to chuckle to yourself and spend your last few minutes free of panic. It’s the end of the world, and Shlohmo feels fine. 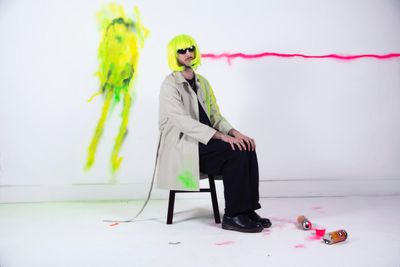 This unique mood is achieved by the producer getting playful with some traditionally heavy, abrasive, and/or moody instrumentation. The doom metal guitars that Shlohmo teased on Dark Red are out in full force on tracks like “Rock Music” and “Headache of the Year,” but they’re paired with spacey synths and glitchy drums in a way that alters their inherently depressed sound. The sonic juxtaposition functions similarly to the hilarious, weed-centrics lyric favored by one of Shlohmo’s favorite doom bands, Sleep, creating an escapist bent to otherwise crushingly-sorrowful sounds.

Elsewhere, traditionally dark ambient and noise textures are flipped in a way that almost makes them calming, alternating between primal scream therapy-style catharsis and zen-like tranquility. This is best illustrated in a suite of four tracks in the album’s third quarter, three of which are chilled-out cuts named after mundane actions (“Staring at a Wall,” “We Sat in the Car,” “Watching a Video”). They’re briefly interrupted in the middle by “Panic Attack,” a drum-n-bass freakout bookended by a deceptively smooth intro and a de-escalating outro. A decade into his professional career, Shlohmo’s now capable of conjuring up any mood he wishes, with a stylistic palette that fits the thematic purview of whatever ambitious project he’s currently cooking up.

MERRY JANE caught up with Shlohmo over email to put some words to his wordless artistic statement. Befitting an instrumental-only artist, he’s a man of few words, but his explanations of The End’s themes, influences, and moods lend the project some added meaning.

MERRY JANE: Why was the apocalypse on your mind during the making of your new album?

Shlohmo: It’s hard not to think of the apocalypse in times like these. But I like to imagine it though from the perspective of doomsday cults who celebrate it. I honestly try not to think about anything when I’m making music, though. It just comes out dystopic by chance, but maybe with a bit of hopeful escapism underneath.

Smoking a spliff of [the strain] Gushers and reading an old copy of Thrasher.

A lot of The End sounds — to someone who listens to a lot of doom metal — influenced by doom metal. How do you go about capturing that vibe using a completely different set of instruments and production techniques?

Yeah, I definitely am heavily inspired by doom and stoner metal. Sleep and Electric Wizard have been favorites of mine since I was a teenager. I’ve always been interested in trying to recreate that feeling without a band, combining doom guitar and tempo with electronic elements just feels natural to me.

From the earlier days in your career until now, how would you describe your shift in sound?

I think from my first album until now, my sound is still rooted in the same feeling — raw and imperfect, hopeful doom — but it has become more succinct and concrete.

What, if anything, has factored into your shift from poppier stuff to the epic scope of your two most recent albums?

I don’t know that I’d say I was ever making pop, if anything the remixes of pop songs I was doing 6 or 7 years ago have come to be what a lot of pop records sound like currently. But at the time, I was making something that didn’t really exist yet — it’s what I wished pop music sounded like at the time. My albums, though, have always been fairly left field — no vocals, no features, just me making whatever I want. That usually ends up being a weird mix of all the instrumental music I grew up on.

When you perform these days, do you favor your album material or splice in more remixes/upbeat material?

It depends on where I’m playing and what the setting is. Usually I’m touring and playing live sets with a full setup — including a guitar, synth, and sampler — and I’ll only play original stuff. But I also DJ and that gives me the chance to play my remixes and more club-ready type shit. 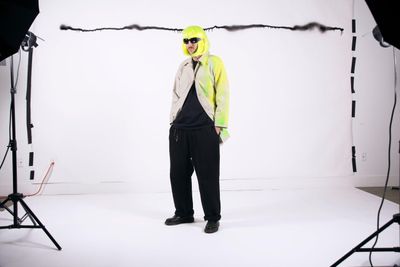 Dark Red was, as is obvious from its title, also a dark album. What would you say is the biggest difference in tone when compared to The End?

I think the tone is similar just more evolved. It’s still coming from the same place. It feels like a natural progression; I try not to think about it too much.

All of your album are over 50 minutes long. Why do you favor lengthy runtimes? Are you ever worried about people’s attention spans, especially when they’re all instrumental?

I never really think of what people want. I can’t care or else I’d be making the same shit as everybody else. I don’t necessarily prefer long runtimes, it’s just how long it takes to say what I feel like is necessary. People’s attention spans are not a focus of mine. It’s definitely not for everybody, but I don’t really like everybody so that’s fine.

Purchase Shlohmo’s ‘The End’ from Friends of Friends’ online store.

420
MUSIC
INTERVIEW
CULTURE
MORE...
Patrick Lyons
FOLLOW
Patrick Lyons is a music writer based in Portland who is equally enthralled by black metal and Southern rap-- catch him making maddeningly eclectic choices on the aux cord.
Share this article with your friends!
AD
By using our site you agree to our use of cookies to deliver a better experience.
Accept
Decline
MORE FROM MERRY JANE