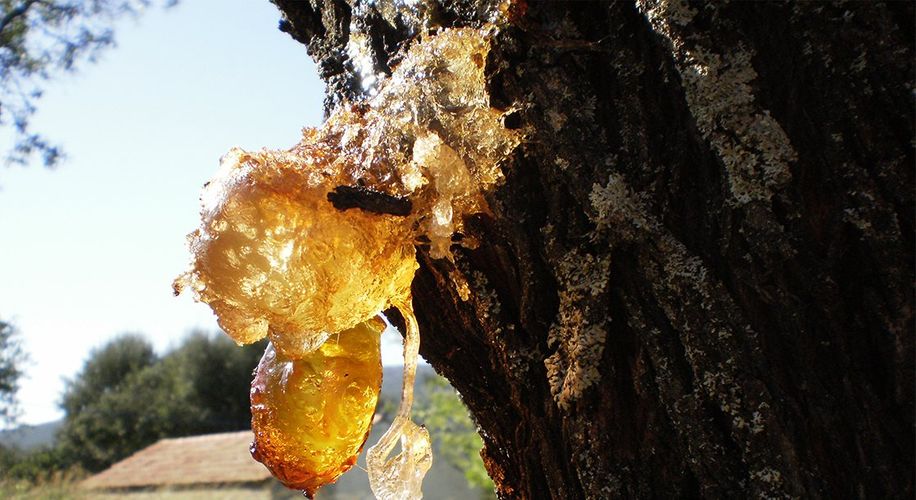 Resin vs. Live Resin vs. Rosin: What's the Difference?

We break down the three highly-potent Rs and showcase what makes each form of cannabis unique in terms of effects and how it's made.

We break down the three highly-potent Rs and showcase what makes each form of cannabis unique in terms of effects and how it's made.

This article originally published in 2017, but to celebrate 7/10 — aka the de facto dabbing holiday — we're resurfacing this story for your enjoyment and enlightenment.

In the past few years, the consumption of cannabis has extended far beyond old school joints and bowls full of ground flowers. Today, consumers can enjoy pot in a variety of innovative forms that would blow the kneecaps off past generations of smokers — people more familiar with homegrown shake filled with seeds and stems than butane hash oil and “fast-acting” edibles.

There’s plenty of buzz in the cannabis community regarding the three Rs: Resin, live resin, and rosin — all highly potent forms of cannabis. There’s also a great deal of confusion regarding these avenues of cannabis consumption and the relative pros and cons offered by each. With legalization spreading across the United States and the pool of marijuana consumers growing daily, those in both legitimate and black markets need to understand their options in terms of how they can consume the kind herb. Below, we break down the three R’s and highlight what makes each unique in terms of effects and production steps.

Resin, sometimes called “sap,” is the term that describes the gooey trichomes that appear on the flowers and sugar leaves of mature female cannabis plants. Trichomes produce all of the medical efficacy and psychoactive effects of marijuana, and if they’re dried, cured, and collected, the trichomes are called “kief.”

From an evolutionary perspective, resin acts as a defense mechanism for the plant, helping it to stay alive through its entire flowering cycle so that it can successfully reproduce. Not only is resin the source of all of the plant’s cannabinoids and terpenes, but it also does things like shield them from UV light. The aromatic terpenes manufactured by resin act as a deterrent to pests such as insects and animals, which might otherwise eat the flowers of the plant before they are able to reproduce.

Cannabinoids (such as THC and CBD) and terpenes (like myrcene and linalool) are all contained in this resin. While more than 400 chemicals are found within a typical sample of smoked cannabis, extractions of cannabis resin offer a higher concentration of cannabinoids and terpenes.

Terpenes are extremely volatile molecules characterized by relatively low boiling points. This means that any resin extraction process involving heat — such as butane hash oil (BHO) or rosin — will necessarily destroy a portion of the terpenes. This, in turn, will decrease the medical efficacy of the sample.

“Resin” is also a common reference for the brown or black tar that builds up in pipes and bongs after several uses (especially if one is smoking high-potency herb). However, resin is resin is resin, whether it has been combusted via smoking or not. Some desperate pot smokers scrape the burned resin from their bong or pipe and re-smoke it in an effort to get every last bit of THC from their stash.

Rosin, also called “rosin tech,” is a cannabis concentrate in which the dried and cured flowers of the plant are pressed under a combination of heat and pressure to release the THC-rich resin. Unlike more traditional forms of extraction, such as BHO and CO2, the production of rosin can be accomplished safely in one’s home.

While BHO concentrates are often backyard brewed, the process involves dangerous solvents that are infamous for causing explosions and burning down apartment buildings (typically due to improper handling). Similarly, CO2 extraction requires trained operators and expensive equipment costing $100,000 to $250,000 per machine that operate at about 10,000 psi. In other words, both BHO and CO2 extraction are decidedly-industrial procedures requiring specialized machines and facilities.

Rosin offers a safe and healthy alternative involving absolutely no potentially harmful extraction solvents. For as little as $30 for a consumer-grade hair straightener, users can press their marijuana buds for a few seconds to create a concentrated golden oil. Of course, one must remember the “garbage in, garbage out” rule: the quality of homebrew rosin is highly dependent upon the potency and purity of the flowers employed in its production.

Some innovative dispensaries in California are beginning to offer onsite rosin presses to their customers. This allows shoppers the option of pressing some or all of the flowers they purchase at the retail outlet to affordably and conveniently extend the variety of cannabis in their medicine cabinet.

Live resin is the latest form of cannabis concentrate to emerge in legal states like California, Colorado, Oregon, and Washington. Unlike rosin, but like BHO and CO2 concentrates, live resin requires expensive laboratory equipment and trained technicians.

This increasingly popular and unique form of cannabis concentrate involves the cryogenic freezing of a freshly-harvested plant at temperatures below -292 degrees F (-180 C). This process is often labeled “full plant” or “full spectrum” because it involves the entire plant, including the flowers, leaves, branches, and even stalk.

Cannabis consumers who focus on terpenes and their medical efficacy gravitate toward live resin because it preserves the terpene profile of the plant. Other processes, such as CO2 and BHO, typically result in the loss of many or most of the terpenes because of the heat involved.

Because terpenes are responsible for the sometimes pungent odor of cannabis, live resin has a much more full-bodied aroma. In addition, live resin delivers greater medical efficacy because it provides more of these molecules that have been proven to fight cancer and reduce systemic inflammation.

Due to the special cryogenic freezing involved, live resin tends to be the most expensive form of cannabis concentrate. However, it is also the most promising in terms of preserving the medical efficacy and potency of a freshly harvested pot plant.

Do you have any favorite resin, live resin, or rosin products? Let us know who makes your favorite in the comments below! And re-visit our past video on rosin tech below:

Gooey Rabinski is a freelance writer and photographer based in Humboldt County, California who has written for High Times, Cannabis Culture, and Whaxy. He Tweets from @GooeyRabinski.