Prior to covering A-listers, though, McDonough scoured the underworld of sewer-level entertainment. He co-edited Sleazoid Express, a legendary NYC ’zine created by a mad genius named Bill Landis that chronicled the 1980s Times Square grindhouse scene as it crumbled around its correspondents into crack-AIDS-and-Giuliani ruin.

In that milieu, McDonough came across the work of Andy Milligan, a maker of no-budget schlock horror and sexual psychodramas that — no joke — make the films of Ed Wood look like Academy Award winners.

With bizarre ambition and questionable talent, Milligan pumped out eyesores on the order of Bloodthirsty Butchers (1970), Torture Dungeon (1970), Guru, the Mad Monk (1970), and The Rats Are Coming! The Werewolves Are Here! (1972).

Still, as with Ed Wood, a unique vision permeates Milligan’s output and McDonough picked up on it. Diving deeper, McDonough discovered that the director of Gutter Trash (1968) and The Man With Two Heads (1972) had also been a pioneer of gay cinema with his breakthrough short Vapors (1962). And, as the creator of the Caffe Cino theater, Milligan helped establish New York’s Off-Broadway movement. 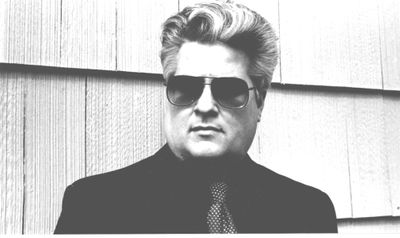 In time, McDonough relocated to Los Angeles to live near Milligan. McDonough not only participated in making one of Milligan’s last films, Monstrosity (1987), he also acted as a caregiver while the sexually libertine director succumbed to complications due to AIDS.

All this resulted in The Ghastly One: The 42nd Street Netherworld of Director Andy Milligan. It’s an absolute masterpiece of a biography named after the director’s 1968 effort, The Ghastly Ones. Alas, when initially published in 2002, the book did not shake the world as it properly should have.

Eerily in keeping with Milligan’s work, though, those who discovered The Ghastly One have fought to keep it from fading into oblivion. Devotees include cult kingpin John Waters, who insists it would make a great Broadway musical, and Time magazine critic Richard Corliss who wrote, “What a movie it would make! What a book it already is!”

Another Ghastly One champion is filmmaker Nicholas Winding Refn (Pusher, Drive, Neon Demon). Refn is officially reissuing an updated and expanded version of the book just in time for the holidays. Refn has also put McDonough in charge of his mind-blowing online culture outlet, byNWR.com.

With The Ghastly One set to, at last, receive its proper due, Jimmy McDonough took some time to talk to MERRY JANE about the anarchic overwhelm of it all. 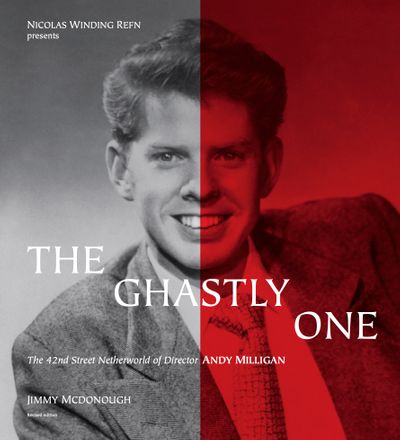 MERRY JANE: First off, tell us about The Ghastly One — the original book and its new reissue.

Jimmy McDonough: In my youth, I hung out in Times Square. There, I got fascinated with a particular filmmaker, Andy Milligan, who was then putting on plays in a fleabag theater on 39th Street. Andy was a misanthrope, a gay sadist, and a million other fabulous things. He’d also made some of grimiest and oddest movies to ever grace the Deuce [as 42nd Street was called].

I met Milligan briefly at his theater, became even more intrigued, and started researching his life. I eventually went out to Tinseltown to work on — and briefly be in — one of his last movies. And, unfortunately, to watch him die.

How did Andy Milligan come into your life?

I’d been obsessively digging into Andy’s life, which he was very ambivalent about. But once Milligan started making movies again out in Tinseltown after many years away, who does he call late one night but his biographer?

He said, “Hey, babe, want to come to Hollywood and work on a movie?” I immediately quit my legitimate (and dull) freelance career working on big-budget mainstream movies in NYC to hightail across the USA in an old jalopy to work for Andy for 100 bucks cash a day. It was the best decision of my life.

The whole experience was incredible, and the book took on a different flavor, to say the least. It’s one thing to research somebody’s life by hearing about it from them and others; it’s another thing entirely when they’re doing their thing in front of you — and they’ve invited you to jump in.

My favorite creation came of it: The Ghastly One. How can it not be? It’s a little jewel in the shit that is life. 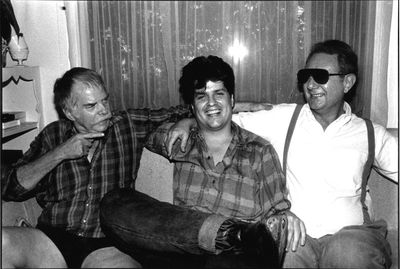 What role did drugs play in Andy’s life and work?

Zero. Andy hated drugs and drink. He was really a prude, which is funny considering how depraved the rest of his life was.

I’ll name an Andy Milligan movie, you tell us which drug goes best with it and why.

Vapors (1965) — Ex-Lax. A very constipated (but far from uninteresting) movie, this one. Life and love in NYC gay bathhouses circa the mid-60s. So much angst. The script wasn’t by Milligan, but by one of his actresses, that regal question mark known as Hope Stansbury. Andy kind of laughed when I asked him about it. He had no idea what it all meant!

The Ghastly Ones (1968) — Arsenic. Andy’s “family-reunites-to-discuss-the-will” movies ooze incredible bile. There are several of them.

The Rats Are Coming! The Werewolves Are Here! (1972) — Xanax, so you can sleep through it.  So much talking! Shut the hell up, everybody! I do not care that you’re a werewolf! Not the most compelling Milligan movie.

Fleshpot on 42nd Street (1973) — Oh, definitely heroin for this one. Times Square opioid death glow. One of Milligan’s best.

Monstrosity (1987) — Nitrous oxide. Stupid movie, stupid drug. A million laughs to make, though. Andy nearly set me and the rest of the crew present on fire!

Russ Meyer was famously a two-fisted all-American World War II vet with no love of hippies. What was his specific stance on drugs and, in particular, marijuana? Did he ever indulge?

Not unlike Andy Milligan, Meyer was another prude. He was anti everything, including fun. Aside from all those “chicks with no brassieres,” Meyer thought the ‘60s were a commie plot. He ran his [production] crews like they were boot camps and kept the sexes segregated. Believe it or not, RM actually forbade sex on his sets, although Tura Satana demanded — and got — a sexual partner on the set of Faster Pussycat! Kill! Kill! And no, it wasn’t Russ.

What’s the best Russ Meyer movie to watch while stoned? Why?

Beneath the Valley of the Ultra-Vixens. The montages of Kitten Natividad’s body — intercut with shots of radios, vibrators and squeaky bed wheels leaving marks on a garish carpet — play like demented sex industrials. Meyer liked to get into an obsessive visual groove and just stay there forever, kind of like a mentally ill version of the Hi Rhythm Section. Russ Meyer had such a crazed, fetishistic mind. It was the source of his greatness — and you could say it led to his downfall.

Here’s a funny drug fact about that book Big Bosoms and Square Jaws. I was on the antidepressant Wellbutrin at the time and on way too high a dose. It made my brain run like an overheated Chevy. That’s why that book is so… feverish [laughs]. 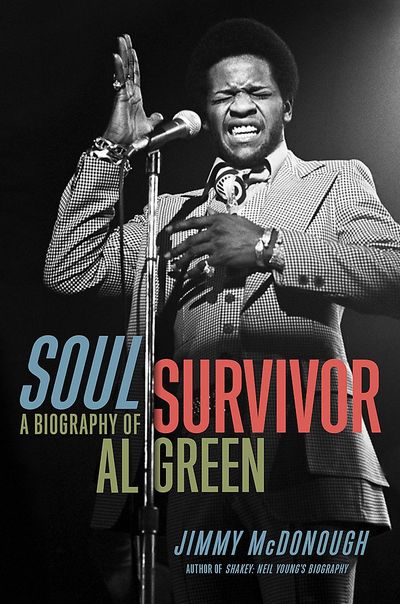 We don’t necessarily think of drugs when we think about Tammy Wynette and Al Green — yet the country and soul music of their eras were awash in all manner of them. Meanwhile, rock couldn’t proclaim its drug allegiance enough. What’s behind that perception?

Rockers were neon-billboard clichés of drug abuse. It’s part of the costume. Country/soul people had more to lose. It had to be kept hidden. They were just sly about it, and didn’t advertise their use. You’re talking about slicker characters anyway, for the most part.

How did weed and hallucinogenic drugs play into their lives and careers of Tammy and Al?

Not much that I know of. Tammy, of course, was addicted to painkillers and it completely derailed her life and her sense of judgement about people she trusted, in my opinion. An epic tragedy.

The Reverend is just naturally psychedelic. But has it been a lifetime bad trip? Al will never tell you. 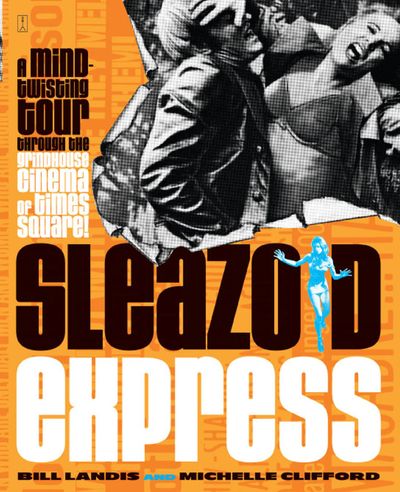 You were the co-editor of the legendary 1980s NYC zine Sleazoid Express, which chronicled trash movies and the Times Square theaters that showed them during one of the city’s most notorious “low” points. What role did drugs play in creating the zine?

Well, in the initial creation of it, nothing. But I came along at the same time as the opiates did, and it coated everything in sight with a glittery, intoxicating loser dust like a Montana 7-Eleven on Christmas Day.

Granted, it was fun at first, but it quickly veered down a dead-end street.  I wrote about all this in Ecco: The Story of a Fake Man on 42nd Street, the last real issue of Sleazoid. It seemed like the right ending at the time — at least for me.

How did drugs work in ’80s Times Square — what was the trade like? Who used what? Who sold what? How did the cops deal (or not deal) with it?

I never, ever bought drugs in Times Square. Too many ways to get ripped off.  The rule of thumb was: Get high first, then hit the Deuce. For a while, it was a roller coaster of depravity. You could bounce from one side of the street to the other, watching movie after movie after movie, all while observing the best and worst of the human condition unfold in the streets and seats around you. And, sometimes, cats walked in front of the bottom of the invariably torn screen! Rat patrol. 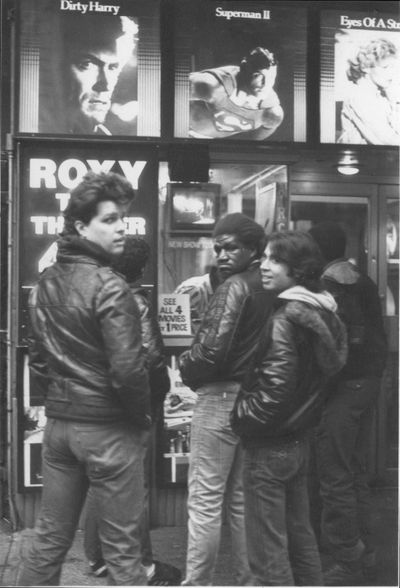 Finally, let’s imagine you’re casting a Ghastly One biopic to be made right now. Who would you hire to play Andy Milligan?

Oh, that one’s easy. Nicolas Winding Refn. He’d need to gain a paunch a la De Niro/LaMotta in Raging Bull and add a few whiskers, but he’s got the attitude nailed, trust me.

But wait, let me provide a drug experience of my own before I disappear into the night. Psychedelics were never my thing. I shouldn’t have taken them, ever. And the last time I did acid was at the NYC Macy’s Day Parade sometime in the…’80s? I split a tab with a friend, got the bulk of the hit, and the last thing I remember was a giant underdog looming over me.

Next thing I knew, I was in St. Vincent’s Hospital and some bum with the DTs was in the next bed talking me down. And there was this cop telling me, “Hey, buddy, you can’t walk around here naked, screaming.” I had no idea what I had been doing, but my hospital gown was pretty much off and people were staring at me like I was a circus animal. So, I very calmly got dressed, walked out, and nobody stopped me. And that was it for me and LSD.

For more on Jimmy McDonough, including where to order the reissue of “The Ghastly One,” visit the book’s website here

INTERVIEW
BOOK
HISTORY
MOVIES
MORE...
Mike McPadden
FOLLOW
Mike McPadden is the author of "Heavy Metal Movies" and the upcoming "Last American Virgins." He writes about movies, music, and crime in Chicago. Twitter @mcbeardo
Share this article with your friends!
AD
By using our site you agree to our use of cookies to deliver a better experience.
Accept
Decline
MORE FROM MERRY JANE