CULTURE
OhGeesy Rides the Wave of Fame with Snoop Dogg on a New Episode of GGN
AD
Shoreline Mafia’s OhGeesy sat down with Uncle Snoop to chat about the young LA rapper’s newfound success, staying humble amid the highs of becoming famous, and how to play the rap game so the rap game doesn’t play you.
Published on April 21, 2020

OhGeesy, known for his slow, methodical drawl when spitting on the mic, says he’s only been rapping for about half a decade. But in that short time, he and his posse, Shoreline Mafia, stormed the LA music scene like a tsunami.

Shoreline Mafia has several members, or "capos," if you will: OhGeesy, Rob Vicious, Master Kato, and Fenix Flexin. Mac P Dawg, a close associate of Shoreline Mafia, and a long-time friend to both Fenix and OhGeesy, was killed by an unidentified gunman in LA earlier this month. The group made their debut in 2017 with the mixtape ShoreLineDoThatShit. Since then, they've landed on the Billboard Top 200 charts in the US and Canada (with their second EP, Party Pack Vol. 2), toured around the world, and cultivated a massive, devout following through YouTube, Instagram, and the like.

To give you an idea of how big Shoreline’s gotten, the group’s video “Nun Major” currently sits at 77 million views on YouTube, and “Musty” has snagged 65 million views. Not too shabby for an ensemble that’s only been around for as long as the iPhone 8.

On this fresh episode of GGN, OhGeesy joined Uncle Snoop at the Smoker’s Studio to discuss his creative process and how he came up, all the while getting some priceless insider advice on the rap game from the Boss Dogg.

In the first half of the interview, Snoop gets the interview warmed up with some questions about OhGeesy’s background, creative processes, and musical influences.

“What was your favorite shit to listen to in the ‘90s?” Snoop asked.

“Yeah,” OhGeesy replied. “I remember watching the Up in Smoke Tour when I was a kid.

Snoop was taken aback. “They let you watch that?”

“Yeah, my uncle put me on that shit.”

“That’s gangsta shit! As a youngster watching that? Damn… that was…” Snoop grinned as he searched for the right words, “... parental advisory.” 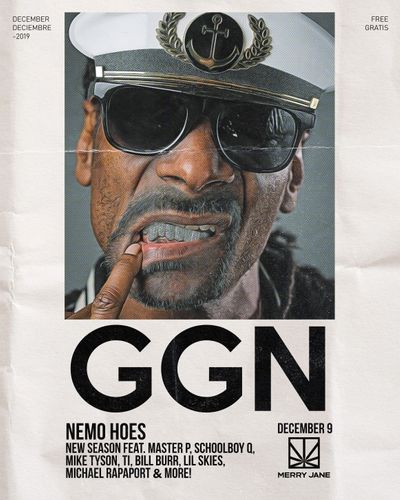 Later in the interview, Snoop gives the Shoreline mobster some pointers on navigating the ruthless-yet-lucrative record industry. He even waxes nostalgic on how the rap game worked prior to the digital age, when talent had to hook up with other talent by looking them up in an ancient tome known as “The Yellow Pages.”

Check out Snoop’s full GGN interview with OhGeesy above, with a candid Q&A “Inside the Smoker’s Studio” sesh and all. And stay tuned for new episodes of GGN featuring Freddie Gibbs, Redman & Method Man, and other MVPs — all premiering here on MERRY JANE.

INTERVIEW
VIDEO
WATCH THIS
GGN
MORE...
MERRY JANE Staff
FOLLOW
MERRY JANE is based in Los Angeles, California and is dedicated to elevating the discussion around cannabis culture.
Share this article with your friends!
AD
By using our site you agree to our use of cookies to deliver a better experience.
Accept
Decline
MORE FROM MERRY JANE