Cannabis is the soul of music festivals. The two go together like Batman and Robin: Effective individually, but a formidable duo together. So why don't more music festivals incorporate weed into their programming? There's only one that's doing it properly, and it's happening this weekend in the Redwoods. It's called Northern Nights Music Festival, and it's the leading example of a new music festival model built around legal weed sale and consumption. To say it's simply breaking the festival mold isn't properly crediting it for the innovation it's bringing to the three-day festival format.

"We were basically planning our events at the same time," Blap tells MERRY JANE. "The people who put on Grass Lands come to Northern Nights, we know them well. They helped us get our permits and we helped them get theirs, and we still work closely with them. Obviously, if 80,000 people are going to a festival in San Francisco, the media is going to cover it. We're only at about 10,000 people, so we get it."

Sam Arabian, cannabis event organizer and head of partnerships at Northern Nights, adds, "We've been pushing and paving the path for on-site consumption at music festivals and events for years. We bring an immersive experience that's organic, authentic, and in the Redwoods. Northern Nights is able to bring the community from the region out into the open and pull back the Redwood curtain a bit."

Like most festivals, Northern Nights has been on hiatus for the past two years. Finally, it's back and it's happening this Friday-Sunday (July 15-17) at Cooks Valley Campground on the border of Humboldt and Mendocino Counties. It's nestled along the meandering Eel River, where festival attendees can spark up a joint and float merrily down the stream while listening to renowned electronic acts, including Claude Von Stroke, TroyBoi, CloZee, and David Starfire (to name a few) while gazing up at skyscraping Redwood trees.

Science says we retain information more effectively when we engage multiple senses. Applying that strategy to a music festival — where the visuals of nature, sound of live beats, and the taste of sungrown flowers are activated in unison — will undoubtedly leave attendees feeling passionate about preserving of the Emerald Triangle. 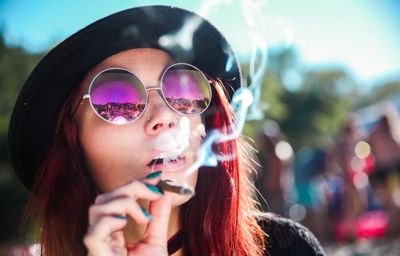 "Connecting people with the vibe of sungrown regenerative cannabis is our goal this weekend," says Daniel from Briceland Forest Farm, a small family-run regenerative farm in Humboldt County. "We are doing a booth with Farm Cut, which is a cooperative brand comprised of five regenerative farms that are Sun and Earth certified, and really trying to create an experience for people. Our booth will be farmer's market style and we'll have a lot of food, we'll have flower crowns for people, and  farmmade popsicles for sale."

Northern Nights is bridging the gap between music festivals and cannabis culture by featuring the best facets of both worlds. It's also pioneering a new festival format that isn't entirely dependent on alcohol sales (and compromising the livers of attendees) for revenue.

"There are a lot of people who choose not to drink alcohol," says Sam Arabian, cannabis event organizer and head of partnerships at Northern Nights. "Northern Nights' orientation around cannabis gives them another outlet and another way to enjoy themselves without feeling excluded or on the outside like they might at other events."

What's more, the event is designed to spotlight Emerald Triangle weed farmers. Why? Because they are the soul of cannabis and the last flickers of authenticity within the new industry. "The goal is to bring the next generation up to the Redwoods and to the river," says Blap. "We want them to fall in love with the Redwoods and meet a farmer, so when they go back to their local dispensaries, they'll tell their budtenders, 'I don't want this indoor weed from Fresno. I want to know where the money is going and if you're supporting small farmers,' all because of the experience they had at Northern Nights."

Moral of the story: Ask your budtenders to carry sungrown and regenerative cannabis from legacy regions, like the Emerald Triangle.

Get your tickets to Northern Nights here.

MUSIC
CULTURE
FESTIVAL
THE EMERALD TRIANGLE
MORE...
Mary Carreon
FOLLOW
Mary Carreon is an award-winning journalist from Southern California and the Associate Editor at MERRY JANE. She’s drawn to stories about cannabis and the environment, social equity, veterans, the history of weed in California, and the rise of psychedelics and plant medicine in the 21st century. You can find her bylines in KCRW, Billboard, DoubleBlind Magazine, Forbes, CA Leaf Magazine, Kitchen Toke Magazine, OC Weekly, (the OG) LA Weekly, High Times Magazine, and more. Mary loves green juice, coffee, and red wine equally — but not at the same time. When she’s not reporting, you can find her doing yoga to Ravi Shankar, or migrating towards the nearest venue playing the best music. Follow Mary on social media @maryyyprankster or visit her at marycarreon.com
Share this article with your friends!
AD
By using our site you agree to our use of cookies to deliver a better experience.
Accept
Decline
MORE FROM MERRY JANE