I recently made a bittersweet jaunt to my hometown of Atlanta for my son's spring break and my birthday. It plunged me into a deep well of reflection, especially being one of those “proud to be where I’m from”-types, and particularly in the case of music/culture in the Black Mecca of the United States.

In Atlanta, yuppies, yipsters, post grads, and Gen Z viral millionaire aspirants galavant about in an artisanal, gin-soaked bliss that’s buttressed by an endangered (but culturally-vibrant and volatile) underworld that was once the only world we knew here. The Olympics couldn’t dead it, but professional sports arenas, film industry incentives, and eager developers have the A on life support.

Whenever I go to Atlanta, I am immersed in so much culture in a city that deeply loves music. Sometimes in LA or NY, I’ll ask for the aux cord in an Uber, and they’ll deny me or say they don’t have it. Or even worse: They’ll be listening to Joe Rogan really quietly. In Atlanta, the Uber drivers offer the aux before you even ask for it. Oh and they let you play your music really loud. Below, I reflect on the self-selected soundtrack to my homecoming, as well as some other significant tunes relevant to the experience. And yes, I bumped this shit in an Uber.

This song makes me feel really cool and free. Freedom is cool, yeah? Imagine me as an early ‘90s neo-mod / proto-grunge drifter at the peak of a road trip near the end of “the film,” headed west on the 10 with my sweet and a few true friends who have been enemies before and are now having incestuous trysts amidst actual life-and-death close calls. You know that kind of film of which I speak. Y’all fuck with Go?

The lead riff of “Fingertips” by Brian Jonestown Massacre has that sort of auto insurance or allergy medicine commercial tone that we all know I love. It’s funny because Shania Twain and Sheryl Crow like that type of guitar tone, as well. But that ain’t this and this ain’t that.

And there’s a sexy shoegaze tragic waif-sounding woman singing. This is significant because in every BJM song I’ve ever heard, it’s that dude Anton singing. I just found out the woman singing is Tess Parks, and apparently the album that features this song was released as a hand dubbed cassette in 1991, but was finally put out on vinyl in 2017 (after a cassette re-release in 2012). A rare uplifting treat — an incredible edible, if you will and I shall.

Between the Beltline and various Hollywood movie/tv projects moving to Atlanta, the overall tapestry of the metro area has become pretty bleached. Word around ACDC (Atlanta City Detention Center) a few years back was that when all the projects got shut down, they sent everybody to Clayton County (“Clayco”). Have I researched or verified this? No I AIN’T A JOURNALIST — I AM AN INSPIRATIONAL SPEAKER. But shit did get crazy out there. For the past decade or so, the rap that has escaped Riverdale/Clayco, which is affectionately referred to as Draco County, has packed vitality and urgency. Slimesito is the evolution of that with a very different style and a lot of influences harnessed/balanced gracefully.

As far as the musical content, Slimesito is basically a MAGA nightmare. He’s a Black  Panamanian Blood mastermind on some international crime syndicate shit, which has him employing Ahks, Crips, Eses, and whoever else in his triple cross schemes. His microgenre is Southside Drill, but it’s recently taking on a weird club rave trap feel. Maybe because my family is from New York, and I’m from Atlanta, and I’m always under such pressure to enunciate, I really enjoy his commitment to maximum Georgia hood patois.

Slimesito, Xanman (who I’ll talk about later in another column), and Hi-C are my favorite new rappers. The song “SNAKES” radiates high action drama; it’s warrior quest music. The beat is on some romantic cartel first-person shooter shit. I find it telling the way a rapper misconstrues old adages and cliches to fit their specific gestalt. “I’m only scared of God so I cannot fear you,” Slimesito says. A zealous perspective, indeed.

The whole “fear of God” concept in Abrahamic religions always fascinates me, and I go back and forth on it. Sometimes that idea seems like population control by Council of Nicea translators or Roman Senators. But perhaps the idea that the only thing to fear is an ambient, karmically-charged canopy on all of reality that you can rarely touch or access in any quantifiable way can be freeing — at least in terms of a rejection of the world and a belief in yourself. Whatever, I dia-gress (still tangential).

The empirical voice on hip-hop — you know, the faint lingering one delineated by VH1’s I Love the ‘90s, The Source’s “5 Mics,” and the big label narrative control of the religiosity surrounding “Classic Rap” (ATCQ/Tupac/Biggie/Death Row — y’all watch The Defiant Ones?) — has been challenged, and it’s fading, or rather, expanding into something murkier. The greatest schism yet takes form within our collective memory’s attempt to audit rap’s historical value. Now, there are many parallel “classic” hip-hops.

To wit, Slimesito is a thorough student of latter era Soulja Boy classics like the album 25 The Movie and the golden post-Finally Rich run of Chief Keef (Almighty So, Bang 2, Back from the Dead 2). If there’s one thing I enjoy, it’s a rapper with a broad sense of cultural literacy about the legacies and lineages they emerge from — all while maintaining a strict sense of identity, character, and style. (He’s the only Slime in Atlanta bigging up Vado!) My best B-Dog friend from LA often comments positively on the properness of Slimesito’s banging, which is a sensitive subject in Black/Brown communities all over, as we consider the future of this new tribalism in the wake of our big brother Nipsey Hussle’s passing. Perhaps Tupac’s dream of the gangs uniting is upon us.

Sidenote, my good friend Whitney Mallett once told me about a thrilling conspiracy theory she encountered while researching Antifa vs. Alt-Right clashes in Oakland a few years back. Some of these self-identifying whites feared a gang truce initiated by Obama in which the Bloods, Crips, Nortenos, Surenos, GD’s, Vicelords, Folks (sorry if I forgot anyone; I’m not a thug) would all team up and remove all the white man’s guns. Sounds pretty cool to me. Maybe when Michelle is in office, she can make this dream become tangible. 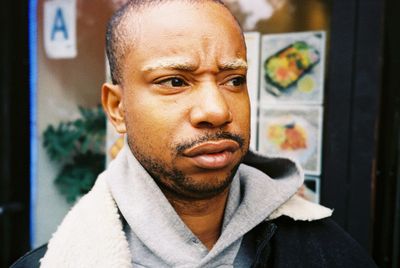 We’re at a supercharged fun moment in the evolutionary, radiating spiral of rap culture. Really, this deserves a whole documentary, but a brief explanation is in order for now. “Black Boy / White Boy Swag,” or BBWBS, is in the DNA of all rap nowadays, but outside of real ones in the A, you’d probably have no idea.

After the dungeon family brand of paranoid, vegetarian, folky, street conscious rap gave way to the po-dunk, rocked-out gospel of Crunk (Pastor Troy, Lil Jon, etc.), which primed things for “real” trappers of the lyrical sort — like Gucci Mane, or the maximalist Young Jeezy, or the ethereal Shawty Lo — to make hardcore reality, dark synth, chicken coup music. This was in the wake of “Pool Palace music,” which was a mixture of OG’s and the snap music scene made famous by Dem Franchize Boyz and D4L (“Laffy Taffy”). Pool Palace-Snap music definitely turned the soil and fertilized it for BBWBS.

BBWBS brought an even more fun spirit to the conversation, in a city where the paradoxical is the quotidian. But really the synth/melody game was insane and reverberates indefinitely in rap music production. The colors of the outfits and hair exploded, the jeans and the shirts got tighter, but people were still strapped talking that juug talk…. but with a more playful attitude, one that was condescending in a traditional African trickster God way (that’s definitely Bowen Homes Carlos’ influence).

Thanks to IRL influencers Young Dro and O.J. Da Juiceman (lyrical, real life trappers of the chicken coup music style I referenced earlier), the language became all about fly color descriptions and non rappity rap delivery, leaping away from Rakim and Styles P. And it’s funny because all that fly abstract (but street) talk definitely has some Raekwon/Ghostface Killah DNA there IMO. A paradox, I KNOW.

Black Boy White Boy Swag predates Basedworld and definitely operates in a more “on the nose” way, as the aught’s music scenes often did. Sea Punk was a hangover from that sort of on-the-noseness. I don’t want to guide your experience too much with this song because it really deserves a panel of DJs/producers to break it down proper.

As we amble in the dark tunnel of memory lane in a hyper-cognizant, meticulous freak-mobile… let’s reflect! As Jay-Z says, “Everybody got a story… We all ghetto B.” This Donna Summer song is intermittently stuck in my head from age six until now. I grew up spending a lot of time on Ponce De Leon Ave, which is an urban jugular and now a spot of rapid *ahem* “development” (a civilization campaign if you will and I’m not!).

Before, it was not only a place of working class families, but also a haven for 24-hour party enthusiasts and professionals (sex workers / slaves or “hoes,” and addicts or “j’s/crackheads”). When I say “hoes” I don’t mean like some hot art school grad taking charge of their destiny selling pum pum pon di on Snapchat. I’m talking trapped women kept as slaves for pimps in a game of psychological/physical abuse and manipulation. But I don’t know, ever since I was a kid, I’ve associated this Donna Summer’s song with all those “At-Risk Adults” of Ponce De Leon, the former Stewart Ave, Memorial Drive, the Old Auburn Ave, and so on. It makes me think of those ostracized into nocturnal life, who are really most in need of healing and the sun’s embrace.

420
MUSIC
HISTORY
CULTURE
MORE...
Negashi Armada
FOLLOW
Negashi Armada is a multidisciplinary artist and writer from Atlanta who resides in Los Angeles.
Share this article with your friends!
AD
By using our site you agree to our use of cookies to deliver a better experience.
Accept
Decline
MORE FROM MERRY JANE