CULTURE
Murs Dishes on Long-Distance Romance and New Music on "About That Time"
AD
The rapper joined us for the latest edition of our 4:20 talk show, where he discussed his latest record and accompanying short film, as well as the impending birth of his third child.
Published on August 15, 2019

On the latest episode of our 4:20 talk show About That Time, we were visited by the one and only Murs. As our hosts Noah Rubin and Kalea McNeill passed joints back and forth, we got to hear the musician’s take on racial equality in skiing, international long distance romance, and quitting all other endeavors to focus his creative energy on making tunes.

In the ‘Post it Up’ segment, where we trawl the guest’s social media for hidden gems, we discussed Murs’ visit to the last-standing Blockbuster Video in America. We were shocked to learn that in the age of video streaming, this one archaic brick-and-mortar locale is still booming! While Murs was there, they were filming The Last Blockbuster documentary, leading to the artist making a cameo. 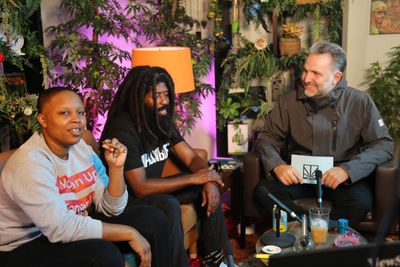 We also got to see a preview of Murs’ newest project, a short film called The Iliad Is Dead and the Odyssey Is Over, which he collaborated on with 9th Wonder and The Soul Council. The project also features guest vocals by Rapsody, Pookie Blow, $ilk Money, Heather Victoria, Reuben Vincent, GQ, and Cjo. The project is a continuation of the synergy these artists found together while making the video for “Walk the Line.”

After completing a 41-city tour, dropping an album, and a mini-film — not to mention the fact that he’s expecting his third child any day now — we hope that Murs will be able to relax and have some quality family time before cooking up his next big project.

Be sure to check out both his new album and the short film — both out now. And if anyone from St. Ides is reading this, let’s get Murs and his son matching tracksuits to welcome him into the Snoopiverse!

420
VIDEO
WATCH THIS
CULTURE
MORE...
MERRY JANE Staff
FOLLOW
MERRY JANE is based in Los Angeles, California and is dedicated to elevating the discussion around cannabis culture.
Share this article with your friends!
AD
By using our site you agree to our use of cookies to deliver a better experience.
Accept
Decline
MORE FROM MERRY JANE