CULTURE
Moms and Dads Dish About How Pot Makes Them Better Parents
AD
Parenting is already hard, but parents who smoke pot face additional stigmas. How do parents consume cannabis responsibly with kids around?
Published on May 22, 2019

Parenting is stressful, obviously. That’s why every parent has different methods of coping to deal with the pressures of childrearing. While some parents choose to pop a Xanax after finishing a bottle of wine, others prefer an alternative route to relaxation — one that (likely) doesn’t turn you into a zombie: cannabis. And since the onset of legalization, a movement of parents have opened up about their consumption.

These canna-moms and dads find that ingesting cannabis —  either by smoking, vaping, edibles, oils, or fast-acting sublinguals — allows them to be a better parent because it helps alleviate the anxiety and stress that inherently comes with having a kid.

“I started using cannabis medicinally two years ago after I was diagnosed with anxiety and found that opioids were not working effectively,” says Corey Herscu, founder of RNMKR Agency, a PR firm that works with lifestyle and cannabis brands. He has two daughters under four-years-old, too. Herscu believes using herb has been key in improving his performance as both a parent and an entrepreneur.

“It was the only medicinal solution that helped me see the positive in the obstacles I faced,” Herscu told MERRY JANE. He started using cannabis after discontinuing prescription medications due to their adverse side-effects — around seven months after his first daughter was born.

“Using [cannabis] helps me be more rational with how I evaluate obstacles,” he said. “It’s helped me slow down and reflect on situations. And, most of all, it has helped me be less emotionally-driven with day-to-day tasks.”

Unequivocally, Herscu believes using cannabis also makes him a husband. “Cannabis not only allows me to be in the moment with my children and embrace the positivity that is childhood, but it also allows me to be less emotional about the obstacles that all marriages face.” 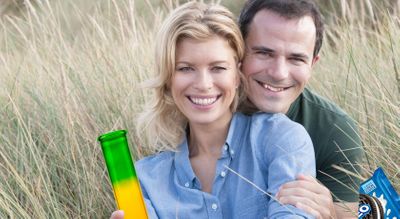 Rosi Mason reports never experiencing anxiety until she became a single mom. Mason quit smoking marijuana prior to her son’s birth. But after a year, she began smoking once to twice a day. Her son is now in 4th grade.

“I have a very hard time sleeping and [struggled with] anxiety from being a full-time, working single mom,” she said. “I don’t take medications like Ambien or Xanax, and have no interest in getting a prescription for either of them.”

Mason said that when she skips vaping before bed, she doesn’t get a full night’s rest, which ultimately triggers more anxiety and propels her further into sleeplessness. However, using cannabis prevents that vicious cycle from happening.

“When I wake up anxious, it’s also something my son can feel,” she explained.

As a result, she does not worry about her cannabis consumption. “I don’t smoke while I drive with him in the car [or] when his friends are at my house,” she said. “I limit my smoking to when he’s not home or asleep. I only drink wine when I have friends over, too, but [also] have so many mom friends that drink a bottle a night… Cannabis, on the other hand, is healthier and less dangerous than drinking myself to sleep.”

Like many people, Tommy Stephenson previously did drink often before going to sleep at night. The current CTO of TruTrace Technologies is the father of three kids, ages 16, 12, and 9.

“I used to drink a lot of alcohol,” Stephenson confessed, “but around five years ago, I was introduced to dabs and [that’s when] cannabis became more available, and I actually stopped drinking alcohol entirely.”

Stephenson said it’s impossible to feel like himself when he drinks. With cannabis, however, he never has to manage headaches and can just be himself without needing the crutch of alcohol to take the edge off.

“Although I think I was already a great father, [substituting my drinking use with cannabis] really helped me to show my kids that not all parents need to drink, and it’s allowed me to be more present. Where I was once anxious all the time, I am now able to relax, focus, and enjoy our creative time.”

An important factor of being a canna-parent is the way in which a parent speaks to their children about the plant. While some interviewees said they won’t discuss consumption with their kids until they’re in their teens, others are teaching their little ones about cannabis from as young as five or six-years-old.

Cara Luhring, founder of Femme Nuri, an online club that connects women to cannabis, has four children. Two are in their early twenties, and the youngest are five and six-years-old. With the older pair, Luhring and her husband remained completely in the closet until their oldest was 16-years-old. “We would hide in the bathroom with air fresheners, and then shower and [use] cologne before presenting ourselves to the world, including our kids.”

But times have changed, especially since she lives in a state with legal cannabis. “For the second two [children], we have been open, educating them on what cannabis is and why mom uses it,” Luhring said. “They know it is not for kids, just like Tylenol and Advil.”

“We have taught them a reverence for the plant and [have] shown them how it grows from seedlings to sticky buds, as we have other fruits and vegetables in our garden,” she added. “Cannabis has been normalized for them in a way it wasn’t for our older children.”

Still, Luhring is worried about Child Protective Services — or, as she called it, the “Gestapo of the government” — taking away her kids. She stresses about family members finding out and judging her or mistreating her children.

“I don’t want to be labeled as a druggie,” she said, indicating that even though she openly discusses cannabis with her youngest two children, the stigma surrounding the plant still persists, even in states where cannabis is legal.

Shira Adler is a mother doing everything in her power to dissolve the stigma surrounding parents who use cannabis.

Adler is the founder and CEO of Shira Synergy and author of The ABCs of CBD: The Essential Guide for Parents (and Regular Folks too). In the past few years, she’s made it her mission to breakdown the cannabis stigma through education.

“The catalyst was when my son was in residential treatment and was misinformed that all cannabinoids are equally bad — THC is as bad as CBD — that I got fed up,” she said. “That’s when I wrote The ABCs of CBD, which explained why pot is not what we were taught.”

Adler believes we’ve done a disservice to our children by lying to them. “We told them in programs like D.A.R.E. that all drugs are equally bad. No, pot is not as bad as heroin.”

That’s why she believes it’s OK to say to your children something along the lines of, “Mama uses a little bit of this plant to relax, or calm down, or manage physical pain."

She clarified that it’s also important to tell your children that “it’s not OK for you to use [cannabis] when you’re young because it works differently in the developing brains of children. It is okay to be responsible and use it to help yourself — under proper care — for your anxiety, PTSD, pain, and depression when you’re older.’”

“They listen,” Adler made clear. “They respect you more as a parent. They form a more authentic adult bond with you, and this helps them to make healthier choices for themselves.”

Even though we’ve come a long way since the stringent Reefer Madness-era, a lingering stigma persists for many who use cannabis. And this stigma is amplified for parents. While many parents — the ones uneducated about the plant — may wrongfully believe these canna-moms and dads are unfit to raise kids, these canna-parents have made it clear that, when used appropriately, it makes them superior caregivers.

NEWS
MEDICINE
ALCOHOL
CULTURE
MORE...
IN THIS STORY
CBD
Click to shop at our CBD store
Zachary Zane
FOLLOW
Zachary Zane is a Brooklyn-based writer, speaker, and activist whose work focuses on lifestyle, sexuality, culture, and entertainment. He was formerly the digital associate editor at OUT Magazine and currently has a queer cannabis column, "Puff Puff YASS," at Civilized.
Share this article with your friends!
AD
By using our site you agree to our use of cookies to deliver a better experience.
Accept
Decline
MORE FROM MERRY JANE