CULTURE
Lightning in a Bottle Music Festival Has Cannabis Representation on Lineup, Thanks to Lizzy Jeff
AD
Lightning in a Bottle is a psychedelics-heavy music festival, but weed is generally left out of the programming. This year is different thanks to Lizzy Jeff, who will be speaking, performing, vibing, and (of course) smoking at this weekend's LIB.
Published on May 27, 2022

Cannabis is the eau de parfum of music festivals. It's the substance no one thinks twice about consuming but is as prevalent as water. Whether you're dancing to music, ordering spicy pie, watching the sunset melt into tomorrow, or wandering around looking for your campsite, weed is everywhere. Even when you can't see it, you can usually smell it. Why? Because cannabis has been the backbone of music festivals since the beginning of time — or at least since the '60s. So, why doesn't it have a more significant presence in festival programming, particularly the education- and wellness-oriented transformational festivals?

It's confusing, considering cannabis is legal in some form in most US states. I give credit to Outside Lands Music Festival, which in recent years offered a cannabis smoke section called Grasslands, where people could buy and smoke pot within the festival grounds. Attendees of Northern Nights, a music festival in the Emerald Triangle, can legally buy and consume cannabis on-site, too. Both festivals are trailblazers shifting the notoriously anti-weed culture of music festivals.

But when you scan the schedule of speakers at most festivals, particularly transformative festivals, psychedelics — a class of substances that aren't legal, just to clarify — are usually the only Schedule 1 drugs discussed. However, the tides are shifting, and Lightning in a Bottle (LIB) music festival, the EDM-hippie-wellness-culture party, is helping to usher in that change. 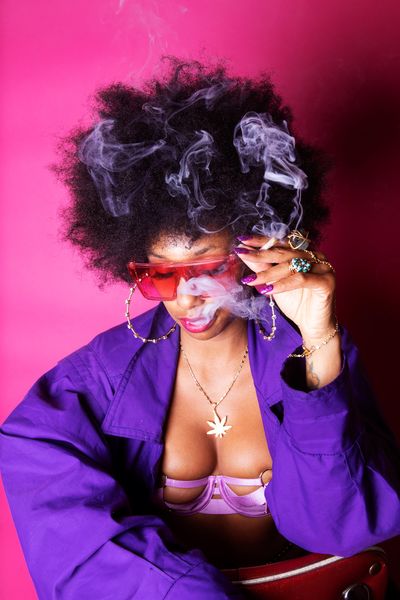 This year, LIB's programming features the illustrious Lizzy Jeff, a cannabis dignitary whose brilliance is channeled through rapping and building extrasensory environments called Zen and Kush. She's one of cannabis' sole representatives at LIB (the other is GRiZ, the saxophone and DJ wizard, who has a pair of weed lines called Astro Hippie and Telescope, respectively). And she's repping in a way that isn't an over-simplistic appeal to the masses. Rather, cannabis is a tool in Lizzy's repertoire to help her discuss more profound topics.

"When I go into these spaces, my vision is to build community and educate others by having real conversations about what's actually going on," Lizzy told MERRY JANE. "I truly believe that cannabis is the gateway. It's the gateway to real change and social shifts, elevating the narrative, healing across racial lines and healing the racial divide. Cannabis at least opens the pathway to the healing we need most."

Lizzy theorizes that people will be on their third joint (or more) by the time they show up to hear her speak on Sunday at 4:30 pm at the Beacon stage. "That is a luxury. It's a privilege. There are people who aren't as lucky who have had their freedom taken for non-violent cannabis charges. So, it's just a reminder that when we smoke or consume the medicine, we do so with intention."

Lizzy will be speaking on Hip Hop Culture and White Accountability. It's heroic, considering LIB is a predominantly white space traditionally built around white DJs. But the music festival community needs this macrodose of real-talk. It's relevant on numerous levels, particularly to the music industry. White male performers comprise the majority of festival lineups, though there's been a slow shift to rectify that issue over the past few years.

The artists on a lineup impact who attends a festival, however. According to Nielsen's Audience Insights Report on Music Festivals, white people make up 69.2% of the festival-going public. Burning Man, an event that shares a mutual fanbase with LIB, released figures in 2014 revealing its attendees are 87% white, the Guardian reported.

"When I get booked, my intention is to create spaces for people who look like me, my mama, my cousins, my brothers, and give them the opportunity to be seen in spaces where we aren't often seen or represented or even reached out to," Lizzy says. Later Sunday night, Lizzy will perform on the Crossroads stage at 11 pm. She says she's going to drop some new music from her latest record, Prophecies of a Rap Priestess Vol. 2, and perform the hits that made her a beloved figure in cannabis, such as "Goddess Code" and "Witchcraft" 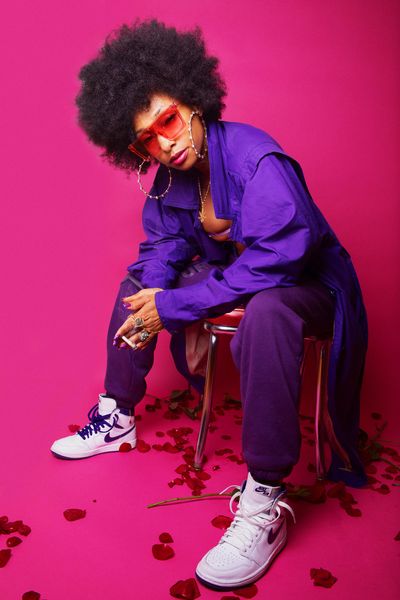 After speaking in the afternoon and performing at night, she'll also be hosting a Zen and Kush afterparty on the festival grounds. If you're a fan of sensuality and high-frequency vibes, then you won't want to miss it.

LIB made the correct decision by booking Lizzy and giving her a platform to showcase her power. Festival programming has never been more critical than it is now. Humans are spiraling and need access to community and healing more than ever. Prioritizing perspectives like Lizzy's gives me hope that transformative music festivals can be a catalyst for social change.

"I'm honored to be a representative for my community and for [cannabis] plant medicine," says Lizzy. "I'm inspired by the energy and the essence of  this feminine plant and I want to bring that essence into the narrative of our culture."

Lightning in a Bottle music festival is taking place at Buena Vista Lake in Bakersfield, California. For more information, including getting tickets, click here.

MUSIC
CULTURE
POP CULTURE
PSYCHEDELICS
MORE...
Mary Carreon
FOLLOW
Mary Carreon is an award-winning journalist from Southern California and the Associate Editor at MERRY JANE. She’s drawn to stories about cannabis and the environment, social equity, veterans, the history of weed in California, and the rise of psychedelics and plant medicine in the 21st century. You can find her bylines in KCRW, Billboard, DoubleBlind Magazine, Forbes, CA Leaf Magazine, Kitchen Toke Magazine, OC Weekly, (the OG) LA Weekly, High Times Magazine, and more. Mary loves green juice, coffee, and red wine equally — but not at the same time. When she’s not reporting, you can find her doing yoga to Ravi Shankar, or migrating towards the nearest venue playing the best music. Follow Mary on social media @maryyyprankster or visit her at marycarreon.com
Share this article with your friends!
AD
By using our site you agree to our use of cookies to deliver a better experience.
Accept
Decline
MORE FROM MERRY JANE