CULTURE
Lawyer Up: Dreaming of the Apple Store of Cannabis? Don’t Hold Your Breath
AD
The cannabis industry wants to see bold and beautiful dispensaries, but the various state rules and regulations around the plant often turn sleek visions into clunky realities.
Published on November 8, 2018

It seems like everyone everywhere is on the hunt for the Apple Store of cannabis. Like it or not, there’s something about the iconic Apple Store — the way it blends slick luxury and cutting-edge tech with open-ended consumer freedom — that signifies the ultimate shopping experience. Once we have its equivalent in the world of cannabis, it seems, marijuana will have finally reached the mainstream once and for all.

But here’s the thing: Right now, in the vast majority of states with legal cannabis programs, it’s not possible to recreate the Apple Store experience in cannabis. A tech store is nowhere near as regulated as a dispensary. Obviously, iPads aren’t a federally-classified Schedule I substance. States don’t develop hundreds of pages of rules about who gets to buy an Apple Watch or how or where you are allowed to take that new iPhone for a test drive before purchasing it. Imagine if instead of walking straight into Apple’s wide-open arrangement of sleek wooden tables loaded with the company’s latest gizmos, first you had to stop into a waiting room while someone checked your ID or patient card. It would be a completely different experience.

Cannabis businesses and activists alike want the world to see big, bold, and beautiful dispensaries that showcase just how normalized and legitimate cannabis has become. But the various state rules and regulations around the plant often turn sleek visions into clunky realities. The stringent laws that  limit everything from how cannabis businesses can advertise to what tax exemptions they are allowed to take advantage of (which are virtually none) also make it challenging to design truly innovative pot shops. 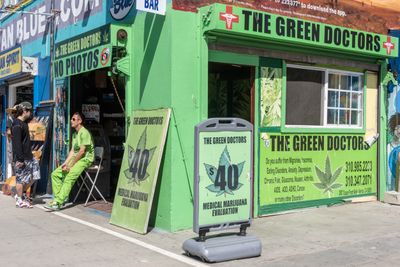 For starters, many, but not all, medical and adult-use cannabis states require dispensaries to separate the areas in which people have their IDs checked from the areas they purchase cannabis, ensuring access to cannabis is restricted only to individuals with the necessary authorization. The result is that many dispensaries end up feeling like a subdued medical office. I understand some aspects of that might be necessary from a medical perspective, but it can put a damper on the facility’s free-flowing, welcoming atmosphere. Plus, lawmakers don’t seem to take into account how these rules impact patients and consumers from a retail experience. What, for example, do patients do if they have young children? Where are kids supposed to stay — in the front room or the retail area — when they go to pick up their medicine?

Also, states severely restrict consumption of cannabis on-site and limit access to products prior to purchase, which means you can’t really have jars of cannabis spread around the facility for people to freely sniff and hold, much less sample. Instead, patients must be accompanied at all times by a staffer who provides them limited access to certain products. Additionally, many states require onsite armed guards at dispensaries, a reasonable safety precaution given that dispensaries make cash exchanges and aren’t eligible for insurance. But once again, the resulting atmosphere is often far from warm and fuzzy. Other aspects of the business that can be tightly controlled include the size and specifics of signage in and outside the store, the placement of windows, even the square footage of the business itself. Then there are the stringent rules about where dispensaries can open, which often force the businesses to open shop in out-of-the-way or inconvenient locations that aren’t ideal for attracting new consumers or making an impression.

Such rules can vary so drastically from one state or jurisdiction to the next that a given company may have multiple dispensaries, but each individual one will hardly look or feel like the others, limiting potential brand recognition. Thanks to rigorous state regulations and local rules, some East Coast dispensaries are designed to somberly dispense medicine and not much else; don’t expect decorations on the wall or a personalized experience. Compare that to San Francisco, where one dispensary — Barbary Coast — allows consumers to enjoy their purchases at an attached cannabis lounge, since California’s adult-use cannabis laws now allow cities to permit such “tasting rooms.”

Matters are especially complicated in Canada, which just became the world’s second country to legalize cannabis at the federal level. The Great White North’s Cannabis Act prohibits cannabis promotion that "evokes a positive or negative emotion about, or image of, a way of life such as one that includes glamour, recreation, excitement, vitality, risk or daring." That’s a pretty sprawling definition, one that critics have used to decry dispensaries that planned to simply divide their products into different categories such as “relax,” “unwind,” and “enhance.” 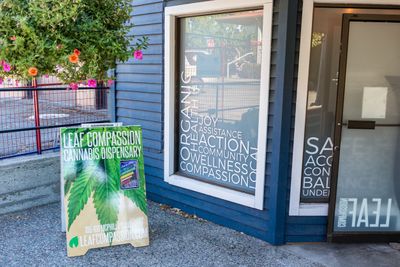 In truth, however, some of the design limitations we’ve seen in the dispensary sector of the industry have been self-imposed. When they were just getting started, many dispensary operators were focused simply on getting their license and retail location up and running, without giving much thought to the consumer experience. That has led to some questionable design decisions that have now been repeated again and again. For example, in Arizona, the rules related to the specific design of waiting areas are not extensive, but that hasn’t stopped most dispensaries from designing these areas in the same formal, uninteresting fashion, without much thought to how they could make this part of the retail experience more interesting for their customers — or more advantageous to their bottom line.

Despite all of these rules and circumstances, that doesn’t mean we’re doomed to be forever purchasing our medical and adult-use cannabis in sterile, impersonal storefronts. Plenty of industries operate under strict rules but still feature creative store designs. Take jewelry stores. They need to employ rigorous security precautions, but most still manage to showcase their wares beautifully and evocatively. Liquor stores, too, are highly regulated, but that doesn’t mean you can’t find superbly designed wine, beer, and spirits retail shops.

There are also numerous examples of cannabis businesses boasting brilliant designs, despite all the rules. In Arizona, where I’m based, one Scottsdale dispensary boasts a sleek and sophisticated retail experience that easily resembles a fashionable Nordstrom counter. In Colorado, Ajoya features a wide, welcoming counter outfitted with futuristic display cases and computerized menus. And in Massachusetts, New England Treatment Access is ensconced in a historic bank building, complete with a dramatic, domed ceiling and wooden display cases that recall old-time bank teller booths. 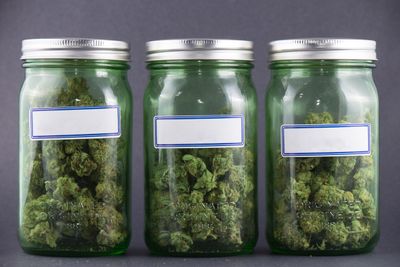 In other words, rules and regulations don’t have to inhibit beautiful design. In fact, limits can inspire creative brilliance. So your customers have to spend a few minutes in a waiting room? Why not stock the space with branded (non-cannabis) merchandise, like you’d find in the reception area of many yoga studios? State rules limit your customers’ ability to smell or taste your cannabis products before purchase? There are many interactive consumer technologies being developed — such as interactive kiosks by EYECONIC and Seed — that allow dispensary customers to learn about and digitally “experience” different cannabis strains. Such efforts don’t just result in more beautiful spaces — they can lead to happier, more engaged customers, which can lead to more revenue.

As for the search for the Apple Store of cannabis? Even if we could faithfully recreate the Apple Store experience for marijuana, why settle there? The Apple Store concept has been done. In the cannabis industry, despite the rules and regulations, the sky is still the limit in many aspects, so why not create something new, interesting, and innovative? The cannabis industry may be full of hurdles and complications, but it also vastly uncharted territory. It’s ready for a brilliant and creative stamp.

For more on Laura A. Bianchi, visit her firm's website here and her personal site here

BUSINESS
LEGALIZATION
RESEARCH
DISPENSARIES
MORE...
Laura A. Bianchi
FOLLOW
Laura A. Bianchi is the co-founder and Managing Partner at Bianchi & Brandt in Scottsdale, Arizona. One of the nation’s foremost experts in cannabis and hemp law, Laura was among the first business/corporate transaction attorneys in the country to focus her practice on the nascent legal cannabis market and has represented clients in more than $100 million in transactions in the industry. Laura now channels her expertise to support the success of professionals in the industry, as well as ancillary businesses, in all aspects of their legal, business, regulatory and operational needs. For more on Laura A. Bianchi, visit her firm's website www.BianchiBrandt.com
Share this article with your friends!
AD
By using our site you agree to our use of cookies to deliver a better experience.
Accept
Decline
MORE FROM MERRY JANE