CULTURE
LA’s First Speakeasy Dispensary Is Opening Today, and It’s Named After Josephine Baker and Billie Holiday
AD
The new dispensary "tea pad" experience is officially open on Martin Luther King Blvd, and it's owned by and created for the needs of Women of Color.
Published on October 29, 2021

Everyone likes the idea of diversity, but there seems to be a disconnect when implementing it in the cannabis industry. Otherwise, white people wouldn't own 80 to 90 percent of legal weed businesses in the US. But the tide is starting to change (at least in LA), and Whitney Beatty and Ebony Andersen are among the Women of Color responsible for this shift.

Andersen and Beatty are the brilliant minds behind a brand new cannabis retail concept called Josephine and Billie's, and it's finally open to the public as of TODAY on Martin Luther King Blvd. The store is a dispensary in the sense that it sells cannabis, but its design is far from the sterile storefront vibe that's become the norm across the industry.

"We've got a 1920s-1930s feel going on, but it's also a call back to your grandma's house, or maybe your great grandma's house," says Beatty. "You know, that velvet wallpaper, that couch she didn't let you sit on, the Jet Magazines on the table — our design is all about bringing those feelings back, the ones you're not going to get at a dispensary that feels like an Apple Store for the 450th time." Beatty and Andersen don't even call Josephine and Billie's a "dispensary." Instead, they refer to it as a "tea pad," a tribute to the underground clubs where Black and Brown people would gather in the '20s and '30s in New York to mingle, get high, and listen to jazz. Tea pads were hubs for many luminaries who fueled the Harlem Renaissance, an intellectual and cultural movement of Black music, art, fashion, literature, and politics. "Josephine and Billies is more than just a place to shop," Andersen says. "It's a place to learn about cannabis and herbal wellness, and a space to build community."

The tea pad offers a wide range of cannabis products from big brands including Monogram, Cann, Select, and Kiva Confections, but places particular emphasis on POC-owned, queer-owned, and women-owned brands including Ball Family Farms, Leune, and California Rolls. But perhaps the most brilliant aspect of Josephine and Billie's is that the store is getting away from using the terms "indica" and "sativa." Rather, the store organizes its product offerings by terpene profiles. In other words, customers can expect to find products based on effects — such as relief or focus, and the terpenes responsible for eliciting those feelings — allowing shoppers to explore, learn, connect and find herbal options based on their desired experience.

Josephine and Billie's is the first dispensary in LA by and for women of color. It's shocking, considering 73 percent of women in Los Angeles identify as WOC. "Research shows that women are more anxious than men, and data shows that black women are facing the most anxiety — and yet we have not seen a dispensary focusing on [the Women of Color] demographic," says Beatty.

Why is that, you ask? Because the US cannabis industry exists on a foundation of poorly written regulations that make licensure only possible for the wealthy. In other words, obtaining a cannabis business license is pretty much only accessible to white folks. (Remember that statistic at the beginning of this story?) 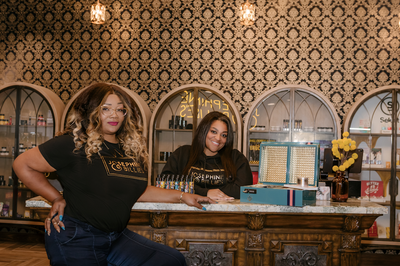 Needless to say, Beatty and Andersen are writing their own rules, much like Josephine Baker and Billie Holiday, the iconic women who inspired the project. Both of whom were endlessly persecuted for using cannabis and simply existing as women who rejected mainstream ideals. "I feel like we have morphed into Josephine [Baker] and Billie [Holiday]," says Andersen, referring to herself and Beatty. They did not outsource any help with the build-out of the dispensary's interior, the paint job, or design — the women did it themselves. "We harnessed [Billie and Josephine's] energy to build something that they would have wanted if they were alive now," Andersen says. "We created the space around, 'What would they want to see? How would they have created this tea pad?' That's why we had to figure everything out ourselves because it wouldn't have been authentic otherwise."

Josephine Baker and Billie Holiday undoubtedly opened doors for other Black and Brown women. Andersen and Beatty are doing the same thing by forging a path for other Women of Color entrepreneurs who want to serve their communities. "Hopefully it'll be easier for the black women who come after us," says Beatty. "We don't anticipate that we will be the only dispensary to focus on Women of Color — I'll be disappointed if we are. Hopefully, for the next women who want to stand in our shoes, it will be easier for them to have those hard conversations and get those investors and people on board. That's one of our main goals with Josephine and Billie's."

Josephine and Billie's is located at 1535 W. Martin Luther King Jr Blvd. in Los Angeles and is open daily beginning Friday, October 29th. For more information, please visit josephineandbillies.com and follow them on Instagram at @josephineandbillies.

NEWS
DISPENSARIES
DISPENSARY DESIGN
SPONSORS
MORE...
Mary Carreon
FOLLOW
Mary Carreon is an award-winning journalist from Southern California and the Associate Editor at MERRY JANE. She’s drawn to stories about cannabis and the environment, social equity, veterans, the history of weed in California, and the rise of psychedelics and plant medicine in the 21st century. You can find her bylines in KCRW, Billboard, DoubleBlind Magazine, Forbes, CA Leaf Magazine, Kitchen Toke Magazine, OC Weekly, (the OG) LA Weekly, High Times Magazine, and more. Mary loves green juice, coffee, and red wine equally — but not at the same time. When she’s not reporting, you can find her doing yoga to Ravi Shankar, or migrating towards the nearest venue playing the best music. Follow Mary on social media @maryyyprankster or visit her at marycarreon.com
Share this article with your friends!
AD
By using our site you agree to our use of cookies to deliver a better experience.
Accept
Decline
MORE FROM MERRY JANE