CULTURE
Kiva Launches Fast-Acting Edibles Technology Just in Time for Danksgiving
AD
Kiva Confections dropped a brand new technology that’s about to change the way we experience edibles — and Kiva's majestic infusions — forever. If this isn't something to be grateful for, we don't know what is.
Published on November 23, 2019

Edibles are truly a perfect way to enjoy cannabis. They don't irritate the lungs, you get to enjoy the magic of infused food, and (today's regulated treats) allow for easy and accurate dosing. The one drawback of edibles is the amount of time it takes for them to take effect, which can lead impatient users to inadvertently take (way) too much. But thanks to new fast-acting cannabinoid delivery technology, traditional edibles’ two-hour onset is about to become a thing of the past.

Kiva, one of the first companies to adopt this new fast-acting technology, is renowned for its innovation in the cannabis industry. Since its founding in California back in 2010, Kiva has gained loyal fans with its line of premium infused chocolates, gummies, and other exquisite confections. Now, with the new fast-acting technology, the company is poised to help edibles become even more mainstream.

"At our core, Kiva wants to change how the world views and uses cannabis,” said Kiva’s co-founder and CEO Scott Palmer. “We want to elevate cannabis so it sits on a level playing field with the likes of wine or craft beer. Fast-acting technology is an exciting innovation for the industry because it has the potential to break down the barriers to entry and change the way that people use edibles."

This new technology triggers the euphoric effects of THC in two to 15 minutes. That’s roughly an hour-and-a-half faster than traditional edibles take to kick in. THC is usually soaked-in and broken down in the liver. But this new tech actually encourages THC to absorb into the soft tissues and stomach. The technology’s individually encapsulated molecules are soaked-up even quicker than nanotechnology alternatives, making it a far more efficient and bio-available product that’s superior to normal edibles. Precisely dosed for a consistent experience, Kiva’s fast-acting edibles are equally effective as they are delicious. And in an industry where consistency continues to lack, Kiva provides the same, dependable product — every single time.

To celebrate the launch of this new fast-acting edible technology, Kiva has incorporated it into a brand new product just in time for Thanksgiving: a limited edition THC-infused gravy. Each packet of the gravy mix contains 10 milligrams of THC and is the perfect complement to turkey, stuffing, and mashed potatoes.

As a way to introduce the gravy to the cannabis community, Kiva invited Mary Jane Gibson and Michael Glazer, the hosts of the Weed+Grub podcast, and stand-up comedians Kalea McNeill and Sara Weinshank to a Friendsgiving celebration in Los Angeles, California, where they had the chance to put the new product to the test. At first, McNeill was a little hesitant to join the party.

"I'm not a huge edibles person because edibles can take forever to kick in and then you end up eating too much because it tastes good," explained McNeill, who was only convinced once she heard about the fast-acting technology.

Glazer agreed that the effects of the medicated gravy — which he said was as simple to prepare as a box of macaroni and cheese — became apparent more rapidly than traditional infused foods.

“The effects were much quicker than I'm used to, which made for a wonderful Thanksgiving meal. I don't want it to kick in during my nap AFTER dinner  — what a waste,” Glazer quipped.

Gibson also said the gravy was delicious, noting that “they've gotten the consistency and flavor profile absolutely perfect." She applauds Kiva for their new product and technology, as gravy is a great way to add an infused element to a meal. 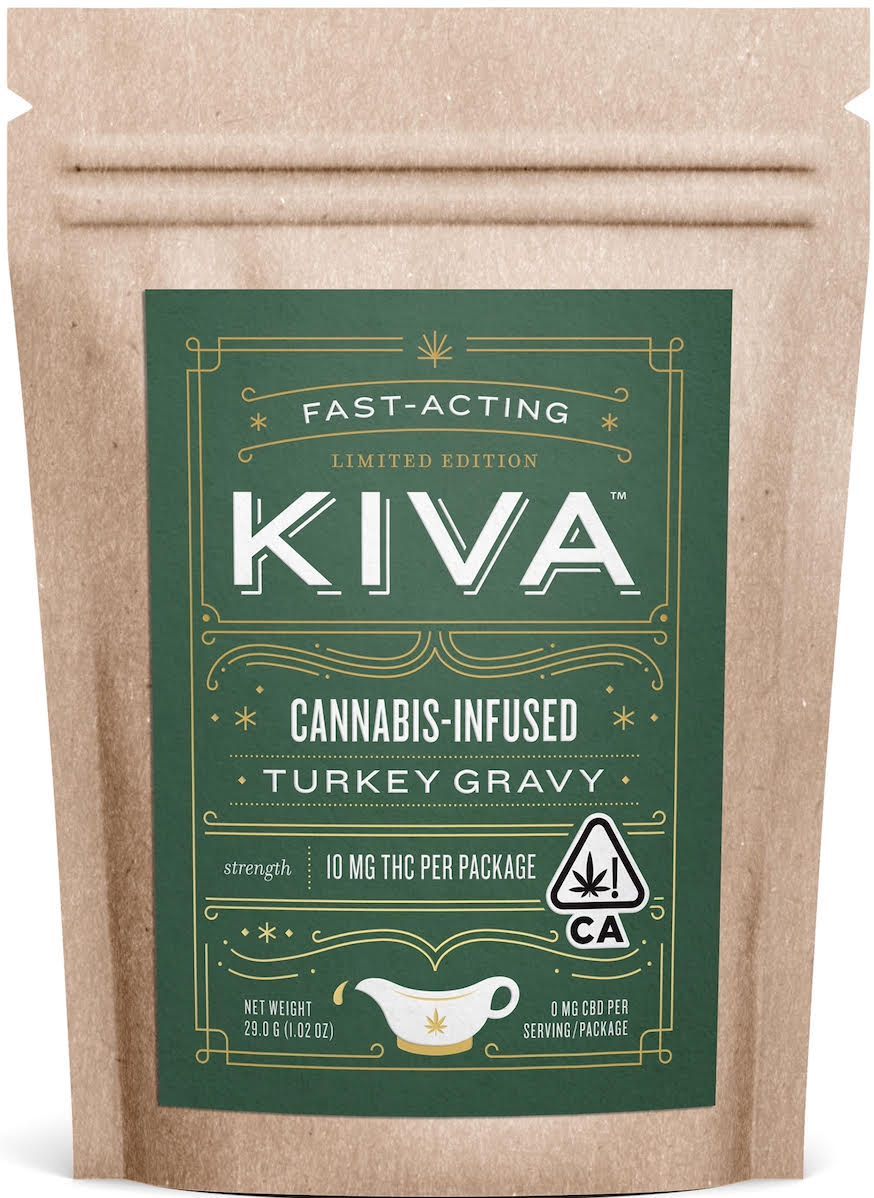 "I think it's such a neat idea to have it as a low dose edible in the form of a sauce on the table,” she explained. “The best part is that it's the best way to go: low and slow. And you can add as much or as little as you want."

Glazer agreed, saying: “I think infused gravy is a brilliant option to have at your Thanksgiving meal, or any occasion. You could even have a container of it labeled ‘In Case Of Emergency.’ Just make sure the gravy is labeled as infused.”

Kiva’s fast-acting gravy is good enough for the holiday table, noted Weinshenk. “I would definitely serve infused gravy to my guests, I think it would make Thanksgiving more pleasant for everyone!”

But, she said she wouldn’t reserve the infused gravy for special occasions. “I wish that I could use the gravy on everything, including pancakes.”

While the gravy is a creative and fun way to launch an innovative new technology, Kiva isn’t stopping there. The company has also announced other new fast-acting infused treats just in time for the holidays, including Peppermint Bark Kiva Bar, Holiday Punch Camino Gummies, and premium hot cocoa mix — a product that McNeill is already excited to try.

“I said call me ASAP because I'm a hot chocolate girl," she said.

Kiva’s fast-acting infused gravy will be available for $5 per packet only at Grass Roots in San Francisco and Sweet Flower locations around Los Angeles, and only while supplies last.

420
EDIBLES
THANKSGIVING
HOLIDAY
MORE...
A.J. Herrington
FOLLOW
A.J. Herrington is a freelance writer focusing on cannabis news, business, and culture and has written for publications including High Times, Sensi, and HEMP. When he's not banging away at the keyboard, you'll probably find him tending to his plants in the garden.
Share this article with your friends!
AD
By using our site you agree to our use of cookies to deliver a better experience.
Accept
Decline
MORE FROM MERRY JANE