CULTURE
“Kings of Sleaze”: How The Mentors Became the Most Obscene Band in History
AD
MERRY JANE talked to director April Jones about her latest documentary — an unflinching, all-access exploration of The Mentors and the madness that has always surrounded the band.
Published on November 5, 2018

First emerging from the late 1970s Los Angeles punk scene, The Mentors quickly proved to be the most obnoxious, outrageous, and reprehensible power trio of all time — and then kept upping their offensiveness factor from there.

Led by drummer/vocalist Eldon Doke, who renamed himself El Duce, The Mentors combined the drug-crazed misanthropy of GG Allin (but with way more humor) and the theatricality of Kiss (but with way less money — and way more nudity) into a rolling freak show of anti-authoritarian chaos and hedonistic abandon.

Punks loved the group’s attitude, while metalheads appreciated the expert musicianship of El Duce, along with bass player Dr. Heathen Scum and guitarist Sickie Wifebeater (the pseudonyms speak volumes). Everyone seemed to be in on the joke, except, of course, the actual authorities.

While the rest of the culture caught up with The Mentors’ approach to gross-out humor during the ’90s (the decade that made mainstream hits of South Park and Marilyn Manson), El Duce managed to ignite what may be the biggest controversy of his entire career.

Shortly after the 1994 suicide of Nirvana frontman Kurt Cobain, El Duce claimed that Courtney Love, the dead rock star’s widow, had offered him $50,000 to murder her husband. He repeated the story on Jerry Springer, in the National Enquirer, and, most infamously, in Nick Broomfield’s 1998 documentary Kurt and Courtney.

In that movie, El Duce says he didn’t kill Cobain but he knows who did and then drops then name “Allen” and says he’ll “let the FBI catch him.” Two days later, El Duce was found dead on railroad tracks in Riverside, California.

Rumors, all unsubstantiated, have long swirled around the fatal incident. Many focus on a musician who calls himself Allen Wrench, the last person known to have seen El Duce alive. Wrench maintains he dropped the singer off at a liquor store and drove home. No charges have ever been filed and no one has ever proven otherwise.

Since the demise of El Duce, the The Mentors have continued to evolve. They still record, tour, and conjure new ways to alarm and abhor.  Even with their original evil genius lyricist gone, the group has continued to surge ahead of all other shock rock comers — both in terms of ungodly wordplay and bravura noise-bringing.

If all this sounds like it would make a sensational documentary, it has. The Mentors: Kings of Sleaze is director April Jones’ unflinching, all-access exploration of the band and the madness that has always surrounded them. Jones scored on-camera interviews with friends, family members, and every living member of The Mentors — as well as, for the first time since Kurt Cobain’s death, Allen Wrench.

Kings of Sleaze premiered earlier this year at the Night Visions Film Festival in Helsinki, Finland. After following the band’s lead and pummeling audiences worldwide at various other film festivals and metal events, the movie landed on DVD and streaming sites just in time for Halloween. Jones talked to MERRY JANE about the movie, the music, the mystery, and all things The Mentors — including how marijuana played a crucial role in the creation of the group’s ongoing legacy. 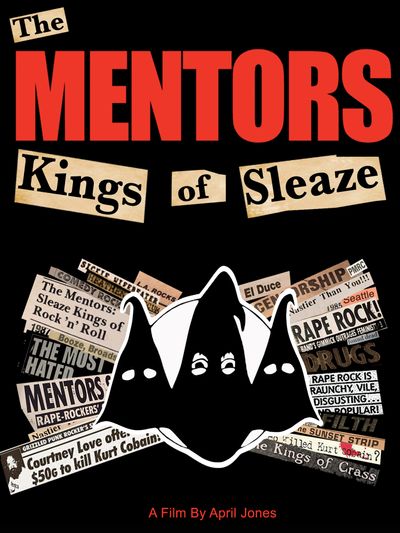 MERRY JANE:  What inspired you to tell the story of The Mentors?

April Jones: What attracted me the most was the outrageous rumors and myths behind this band, not to mention the over-the-top absurdity of their shocking lyrical content. The individuality in their music, stage persona, and comical satire also intrigued me — not to mention their incredible musicianship! Plus, as a journalist, I know a good story when I hear one.

What was it about the 1970s cultural atmosphere that made The Mentors possible?

I think the ‘70s was a time of cultural change. We were coming out of a traditional time and creating our own path and experimenting more. Artists and musicians were constantly pushing the boundaries of freedom of speech through art and music, but nothing compared to what the Mentors did. They took the extreme to another level.

What role did marijuana play in The Mentors?

I feel that marijuana contributed to the parody aspect of The Mentors because despite the shocking content, their delivery is purely satire. If you’ve ever watched the Upright Citizens Brigade skit portraying The Mentors, you can see the comical mockery they portray. Matt Besser wrote and acted in this skit. He told me he’s a big Mentors and GG Allin fan!

During the Mentors 2014 tour, marijuana and alcohol played an everyday role. It was like being in a van with Beavis and Butthead. While listening to the radio, they would change the words to “poop” and “pee” and things like that. It was hilarious! They are really just 16-year-old boys deep down inside [laughs]!

The Mentors expressed shocking content in a funny way to kind of show people it’s okay not to be so uptight all the time. All the perverts came out of the closet because of The Mentors. They showed people that it’s okay to be a pervert and it’s cool to have a big beer belly. Surprisingly enough, they did get a lot of chicks.

The Mentors had the attitude of punks but the musicianship of metal, or more like rock. They’ve never really called themselves either. They are a rock band, but I do feel like they bridged the two genres together because of these reasons.

Since they also had a bad reputation, I think a lot of the metal venues wouldn’t book The Mentors. They didn’t want them pissing or vomiting on stage and were probably scared of the unpredictability of their fans, as well.

The Mentors made U.S. history thanks to Tipper Gore and the PMRC hearings. How did that affect the band themselves?

The PMRC movement just fueled The Mentors and gave them more confidence to keep doing the “rape rock” thing because the more offensive they were, the more publicity they got! You’ve got to find what works for you and go for it, and that is what they did! They found their niche, their gimmick, and it totally worked. And it’s still working.

How did you get the first interview with Allen Wrench?

Reaching Allen Wrench was quite difficult. It took me a year and a half to actually get in touch with him. Well, first of all his social media said he lived in Germany which was a straight-out lie. At the time I was thinking, “Great! I definitely have no budget to fly out there for that!”

After bugging him for quite a while, he responded. People started warning me about doing this interview. One person, a journalist in fact, told to me to be careful to not get hit by a train. It just goes to show how powerful and deep this conspiracy affects people’s opinions.

Have you heard from Allen Wrench since the movie?

I did speak to him after the film and sent him a DVD. He didn’t mention anything about the way I portrayed him, but then again, I wonder if he likes being the perpetrator behind the conspiracies.

What do you think about El Duce’s claims regarding Courtney Love?

I don’t really have a strong opinion about that matter, because I try to base my opinions on factual information, rather than rumors. But the fact is Eldon did pass a lie detector test, so I guess anything is possible. My job is to try to get down to the bottom of things and tell the story of those involved. I asked questions from every different angle. Even the band themselves have conflicting opinions about what really happened. I guess we’ll never really know. El Duce took the truth to the grave with him.

Right now, its seems like many young people are somewhat against free speech. Is that against the spirit of The Mentors?

We are in a time of “You can’t say that!” and that can be dangerous for cultural development and growth. By restricting ideas and different viewpoints closes the possibility of diversifying our minds and perspectives. Not acknowledging different perspectives leads to ignorance and ignorance leads to conflict. We don’t need suppression of ideas and art. That is dangerous, as well.

I think it’s okay if someone doesn’t agree with me. I don’t care if someone voted for Trump. That’s your opinion. I don’t really give a fuck. We can’t live our lives around people who only agree with us.

So what would happen if The Mentors formed today?

If the Mentors came out today, I think they would get the same amount of publicity. Even today, they are still being protested and threatened by Antifa. Antifa is an organization that claims to be against anything fascist, but actions speak louder than words and the group’s actions are led by fake news, hypocrisy, and ignorant assumptions. Idiocracy at its finest.

How would El Duce, in particular, react to today’s atmosphere of hypersensitivity?

He would take all the hypersensitivity and grab it by the balls! I would hope that El Duce would run for mayor, if he were still alive. What a world that would be!

Did the present cultural climate affect your approach to the project?

I honestly didn’t even think about our “political correctness” of society because honestly I don’t give a fuck about what people think about what I do. I make my own rules and I do what I want when I want to do it. Rules lie within the boundaries of our minds. The main thing that kills artistry is conforming to criticism and judgments.

I wanted to reveal the truth behind The Mentors and that’s what I did. I asked them about beating women, racism, politics, and more, and they told me their truth. I would hope any feminist or rational human being who doesn’t like The Mentors, would still want to know the truth behind this enigma of a band. Without the proper facts, proper judgments cannot be made.

What other contemporary bands are keeping the spirit of The Mentors alive?

There are many bands doing the “offensive” or “shock rock” thing. New and old, here are just a few off the top of my head: Meatshits, Truculence, 7 Dirty Words, Fat Stupid Ugly People, Hillbilly Bitch Splitter, The Split Lips, and, shall I say, Steel Panther.

I’m looking for investors and a crew for my next film! I have a couple different grant proposals I’m writing currently. Contact me if you want to be involved! I’ve been a visual artist my entire life and have a strong vision when it comes to executing ideas, so I’m organizing those ideas so I can be ready to attack the next rock doc. Reach out to me. I would love to hear from you!

420
MUSIC
INTERVIEW
ENTERTAINMENT
MORE...
Mike McPadden
FOLLOW
Mike McPadden is the author of "Heavy Metal Movies" and the upcoming "Last American Virgins." He writes about movies, music, and crime in Chicago. Twitter @mcbeardo
Share this article with your friends!
AD
By using our site you agree to our use of cookies to deliver a better experience.
Accept
Decline
MORE FROM MERRY JANE