CULTURE
Just How Long Does an Acid Trip Last?
AD
Why do LSD trips feel never-ending for some people, while other psychonauts can take the same dose and feel like the experience was too damn short?
Published on August 2, 2019

Lysergic acid diethylamide, known on the streets as LSD or acid, has made a comeback in recent years as both a party drug and as a psychotherapy aid.

LSD is currently a Schedule I drug in the United States, the same category as heroin and marijuana. That means the federal government considers acid a highly addictive, incredibly dangerous drug with no accepted medical use. (Although that may change soon.)

So, if you’re reading this as some sort of primer for your first tripping-balls-to-the-wall experience, do so at your own peril. We’re only providing this information for educational purposes.

By the way, the average LSD trip lasts for about six to 15 hours, according to the medical doctors at Healthline. If you want more details, keep reading.

LSD is a chemical derived from the ergot fungus. It was accidentally created over 80 years ago by Swiss chemist Albert Hoffman. Hoffman got a small amount on his hands while trying to discover new pharmaceutical drugs. Unknown to him at the time, LSD’s molecules are small enough to be absorbed directly into the skin. During a bicycle ride on his way back home, he began tripping his face off, and he detailed the experience in his notebook (like any good scientist).

It was probably the most groundbreaking (and insanely fun) bike ride in all of human history. Our regular contributor Brian Blomerth just released a full-length graphic novel titled "Bicycle Day" that chronicles Hoffman's world-altering discovery in vivid detail, if you're interested learning more.

LSD went on to spark the Counterculture movement in the ‘60s; fueled a slew of CIA and military mind-control experiments; and inspired The Beatles, The Grateful Dead, and The Rolling Stones to make some of the best music the West has ever produced.

How Does LSD Work?

How does acid make us see wavy, pulsating colors? Why do we laugh so much and love so hard while on it? Sorry to say, but we don’t really know — though there's been some recent research about what happens to the brain when we hallucinate.

Since LSD is super-illegal, it’s difficult to conduct quality research on it. Most studies we have for it involve rodents. Science knows that LSD binds to our serotonin receptors, and serotonin is a neurotransmitter that regulates our mood, hunger responses, sleep cycles, and, obviously, hallucinating.

LSD’s trip typically lasts from six to 12 hours, which is unusually long compared to most psychedelics. Hallucinogens like salvia and DMT only last for a few minutes, whereas psilocybin mushrooms can induce trips that endure for up to six hours. In some extreme instances, LSD can keep going for up to 24 hours, and some psychonauts will swear that they will feel the trip — if even at a barely-perceptible, residual level — until they get a good night’s sleep.

Gallery — Smoke Weed, Eat Shrooms, and Shine Like the Sun:

Why Does LSD Last So Long?

For decades, no one knew why LSD’s trip could last for almost an entire day. That is, until 2017, when researchers used some badass technology to take pictures of LSD binding with serotonin receptors.

The study discovered that LSD’s unique shape makes it fit into the serotonin receptors in an odd way. The angle that LSD slips into the receptor “locks” it in.

“Once LSD gets in the receptor, a lid comes over the LSD, so it’s basically trapped in the receptor and can’t get out,” Bryan Roth, a structural biologist who led the study, told Gizmodo. “LSD takes a really long time to get on the receptor, and then once it gets on, it doesn’t get off” until it ultimately degrades, like any other chemical.

Here’s an example for how LSD’s binding compares to most drugs. Usually, when an intoxicating molecule such as, say, THC binds to its special receptor in the brain (the CB1 receptor), it sticks to it like a magnet. As THC begins to break down, it loses its bond to the receptor, kind of like when a magnetized piece of metal starts to lose its ability to attract other pieces of metal over time.

But because LSD gets hooked into the serotonin receptor, it just kind of keeps doing its thing until its biological half-life causes it to completely degrade, fall out of the receptor, and clear out of the body. 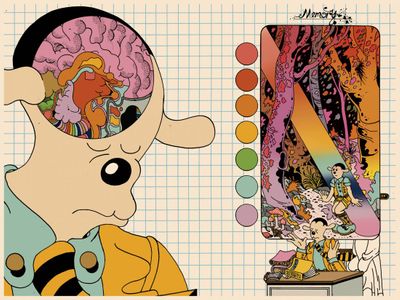 Above: Another illustration from Brian Blomerth's 'Bicycle Day'

Can Someone Prolong or Stop an LSD Trip?

The only way someone could prolong an LSD trip is by taking more LSD. But the human body develops a high tolerance to LSD pretty quickly, so stacking doses this way could be a fruitless financial exercise (not to mention physically dangerous).

A tripper could, theoretically, reduce or even stop an LSD trip a few ways. Some users claim that alprazolam, often sold under the brand name Xanax, can significantly reduce the severity of an LSD trip, if not end it altogether. And since LSD works by binding to serotonin receptors, drugs that block those receptors, like the anti-nausea drug ondansetron, could hypothetically reduce or end an LSD trip.

However, the above methods for curbing an LSD-induced lift-off have not been tested or studied. Coupling LSD with potentially lethal drugs like Xanax or certain serotonin-blockers could have some serious adverse effects — like death. So be careful, be safe, and be mindful, all you trippers out there!

EDUCATION
CULTURE
PSYCHEDELICS
INFORMATIVE
MORE...
Randy Robinson
FOLLOW
Based in Denver, Randy studied cannabinoid science while getting a degree in molecular biology at the University of Colorado. When not writing about cannabis, science, politics, or LGBT issues, they can be found exploring nature somewhere in the Rocky Mountains. Catch Randy on Twitter and Instagram @randieseljay
Share this article with your friends!
AD
By using our site you agree to our use of cookies to deliver a better experience.
Accept
Decline
MORE FROM MERRY JANE