CULTURE
Just How Long Does a Trip on Magic Mushrooms Last?
AD
Before you commit to a tryst with some funky fungus, you should know how long the whole psychedelic experience will last.
Published on November 7, 2019

One of the numerous ways in which psilocybin (the key ingredient in “magic” mushrooms) can alter our perception of reality is by playing with our sense of time. The ability of hallucinogenic mushrooms to disrupt our temporal processing often means that the flow of time may appear to slow down during a psychedelic experience. Thus, those ingesting shrooms may be unable to accurately account for how long their trip has lasted or will continue to last. The same goes for determining how long the substance will be present in your body’s system.

This makes understanding the empirical information available to us all the more important. Vital elements to consider include the species of mushroom consumed, the dosage level, the method of consumption, and the freshness of the product. Together, all of these factors make it difficult to objectively define the length of any one shroom high.

We can, however, address how each element will factor into a shroom experience. In many cases, the potency of a potential magic mushroom trip is easier to discern than the total length of time one can anticipate feeling wavy. For those desperately seeking a numerical baseline, hallucinogenic mushrooms generally produce a primary high that lasts from three to eight hours, though some effects may still be felt for an additional ten to twelve hours.

Regardless, the best way to ensure a safe and delightfully cosmic experience is to be informed. Here are the basics you’ll need to know in order to determine approximately how long your trip may last. 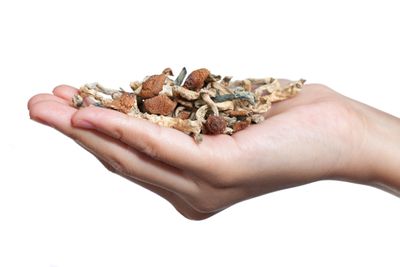 What Kind of Magic Mushrooms Do I Have?

As noted above, the term “shrooms” does not refer solely to one specific species of fungus. Instead, when we talk about shrooms, we’re usually referring to fungi classified under the genus Psilocybe. As a point of interest, the Psychedelic Times reports that there are “over 100 species of mushrooms outside the genus Psilocybe that have psilocybin as their active ingredient.” In short, being safe means ensuring you’ve actually got the shrooms you think you have before ingesting them.

The art of identifying mushrooms is worthy of a guide unto itself, and many exist both online and in published form for those interested in a deep dive on the subject. For simplicity's sake (but by no means an exhaustive overview), here are a few details on three of the most common types of magic mushrooms one is likely to encounter.

What’s the Timeline of a Shrooms High?

Again, numerous factors must be considered in determining one’s shroom high timeline. Here are a few of the most important factors to keep in mind when assessing how long your trip may last.

The amount of psilocybin in a given dose of shrooms typically increases when mushrooms are dried or cured. That means eating fresh shrooms is likely — but not guaranteed — to offer a slightly more subtle experience than dried caps and stems. The method of curing will change the equationm as well, with quality dehydrators serving to preserve more psilocybin than rudimentary techniques like leaving them in the sun or using a hair dryer. 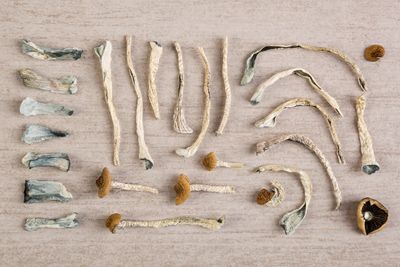 When in doubt, start small and work your way up. If you’ve previously taken an eighth of shrooms and enjoyed the experience, that won’t necessarily correlate to the amount you’ll want to ingest this time around. One cannot really eyeball a given specimen of shrooms and know how potent it will be, so be reasonable when starting your first voyage with a new batch of fungus.

Mushrooms are taken in a variety of ways. The caps and stems (fresh or dried) are often eaten whole. They can also be ground into a powder, which is then either incorporated into another dish or consumed as a capsule. Some enjoy brewing shrooms into tea, and the options don’t end there. What’s important to understand is that shrooms must be processed by our digestive system before our livers can metabolize psilocybin into psilocin — the latter being the active form of the former that induces our desired hallucinogenic experience. Depending on what you’ve eaten, the psychedelic properties can take anywhere from 20 minutes to 2 hours to take effect. Be patient before you reach for a second helping! 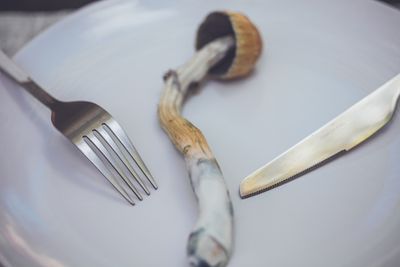 As for when shrooms will be totally out of your body, we’ve covered the specs before and will revisit them again here. To quote MERRY JANE contributor, AJ Herrington:

Consequently, both psilocybin and psilocin are quickly excreted in the urine, with more than 95 percent of psilocybin leaving the body within about 13 hours, and 95 percent or more of psilocin eliminated after approximately five hours.

In other words, your trip might feel endless — but the psychoactive components of funky fungus don’t linger in the body. A heavy trip might last for eight hours, but within 24 hours the psilocybin will be out of your system and won’t show up on any drug tests. Now be safe, and don’t forget to carefully choose your set and setting!

CULTURE
MAGIC MUSHROOMS
PSYCHEDELICS
INFORMATIVE
MORE...
Zack Ruskin
FOLLOW
Zack Ruskin is a cannabis and culture journalist living in San Francisco. Follow him on Twitter: @zackruskin.
Share this article with your friends!
AD
By using our site you agree to our use of cookies to deliver a better experience.
Accept
Decline
MORE FROM MERRY JANE