CULTURE
Jenny Lewis Talks Weed, Pot, and Marijuana (and Also Cannabis)
AD
MERRY JANE met the acclaimed musician on a weed bus as it cruised around San Francisco’s Pride Parade. There, Lewis opened up about her dad’s history with Jack Herer, tarot cards, and her favorite strain.
Published on August 5, 2019

Lead photo by Autumn De Wilde, courtesy of the artist

It’s a warm afternoon in San Francisco and Jenny Lewis is dancing on the roof of a bus.

As a musician, she usually has the benefit of a stage — something she’s seen plenty of lately as she continues to tour behind her critically-acclaimed fourth album, On the Line. Arriving five years after her last record — and 18 years after her former band Rilo Kiley’s debut LP — Lewis’ latest is quite possibly her strongest effort yet, molding the sounds of sunny California into an insightful examination of heartbreak and loss. Plus, she got Ringo Starr to lay down the drums for the album’s lead single, “Heads Gonna Roll.”

This would all be reason enough for Lewis to want to shake a tail feather or two, but today, the source of her celebration is San Francisco’s annual Pride Parade.

Perched atop a bus sponsored by vaporizer maker PAX, Lewis is here to help the city in honoring its legacy of LGBTQ+ activists. She’s at ease in the moment, her auburn hair spilling across the shoulders of a royal blue crewneck as the bass begins to bubble on a speaker blasting “Sissy That Walk” by RuPaul.

“Yes, I wear my own tour merch,” Lewis says when we first meet, pointing to the center of her sweatshirt where an embroidered skull wearing a flower crown is smoking a joint. 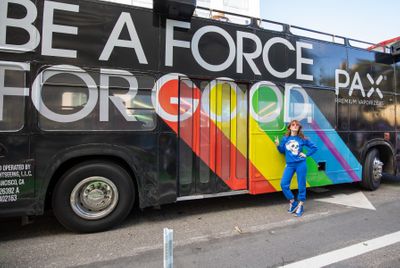 Though Lewis may make a habit of regularly wearing the stuff she sells on tour, her choice of attire is especially fitting for a conversation focused on cannabis.

“I've had a perspective on cannabis since I was five-years-old, not five years ago,” Lewis says later as we navigate our way through the sidewalks of downtown San Francisco in the aftermath of the parade. With the dancing portion of the day complete, it’s time to talk about pot — and the musician’s newfound role in the legal industry.

Luckily, Jenny Lewis has some stories to tell. Raised in Southern California, she learned of cannabis at an early age thanks to her father, Eddie Gordon, who was an early marijuana advocate as well as a career musician. Occasionally, Lewis’ parents would send her to be looked after by a man colloquially known as the Emperor of Hemp.

“My folks would drop me off at Jack Herer's headshop when they didn't have a babysitter,” she says, “so I kind of grew up around the culture.”

For those in need of a quick reminder, Jack Herer isn’t just an omnipresent flower strain. It’s named in honor of the cannabis reform activist who wrote the groundbreaking pot guidebook, The Emperor Wears No Clothes. In fact, Lewis says her father contributed to the text and is thanked at the end of the book, though the gesture ultimately fell slightly short of ideal.

“They misspelled his name,” Lewis laughs. 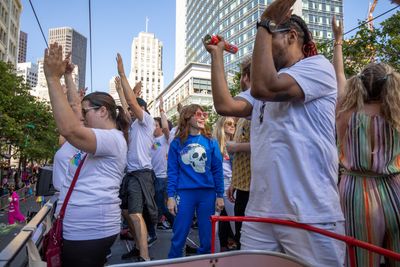 Although Lewis didn’t see much of her father while growing up, she recalls watching him play his harmonica at pot rallies for NORML, the nationwide cannabis advocacy group.

“I grew up not really knowing him very well,” Lewis says of her father, “but he would pop into town to play a NORML pot rally. I would go out with all my friends and see my dad [perform].”

The old days of cannabis activism, which Lewis likens to a secret society, are now long gone. In their place is a rapidly expanding market, one that has other industries running to join the party as the potential power and profits of regulated cannabis become ever more apparent.

“I guess we're on the cusp of this new time,” she observes. “It feels a lot like the Wild West or immediately afterward, where there's this weird, unknown opportunity. It feels very American in some way. Being here in San Francisco and seeing the Hearst building and thinking about the Gold Rush and just that whole thing in the context of the weed movement… it's interesting.”

During our walk, we pass by Moe Green’s. Regarded as one of San Francisco’s more upscale, lavish dispensaries, the space is impressive, and even has its own consumption lounge. Moe Green’s is also a fitting example of the astonishing leap forward cannabis has made just within Lewis’ lifetime. We watch as customers search pockets and purses for IDs and as others leave with prized purchases in hand.

It may be impossible to encapsulate the entirety of the industry in a single business, but standing before the large, glistening front window of Moe Green’s, it’s almost as though you can see the entirety of the blood, sweat, and tears that led to this THC-infused zeitgeist reflected back at you. Lewis watches through the thick pane of glass, observing the store in action.

“My father passed away in 2010, before this whole thing took off,” she says. “I really wish he could've seen what his work did.” 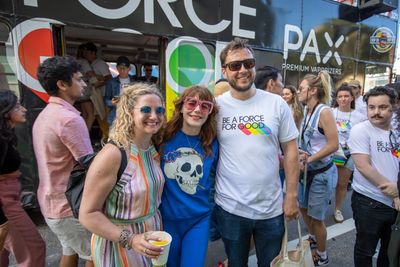 As Lewis explains, her father and Herer were quite close. The work they were doing — offering themselves as public faces for an activist movement concerned with an illegal substance — risked extreme consequences. Though the costs were potentially high, Lewis says she can also understand the appeal of getting together for pot rallies.

Throughout her career — which began when Lewis was a child actor but officially pivoted to music with the release of Rilo Kiley’s 2001 debut, Take Offs and Landings — Lewis has never shied away from incorporating her interests into her work. Her songs often acknowledge her affinity for cannabis (as well as a handful of psychedelics, i.e. her 2008 record Acid Tongue), which in turn could be interpreted as a subtle attempt to recognize the activism of her father, Herer, and numerous others.

In 2014, she released a limited-edition wine in conjunction with her third album, The Voyager. Earlier this year, she partnered with Santa Barbara’s Glass House Farms on a tin of Sour Diesel pre-rolls that featured art commissioned for On the Line.  Dubbed “Rabbit Hole,” the release shares its name with the closing track of the album. Lewis says the Alice in Wonderland metaphor is perfectly suited to serve as the name for her pre-roll collaboration.

“I don't think going down the rabbit hole is bad,” she muses. “I think a sativa can assist you on your creative path. You can tunnel out on something. It's more of an upbeat, creative thing.”

Lewis emphasizes that this isn’t “her” strain — nor an official Jenny Lewis-branded pot company — though she teases that she might release a strain of her own at some point in the not-so-distant future. Instead, her pre-rolls feature a low-THC, sun-grown Sour Diesel hybrid from Glass House Farms, who has made them available at select dispensaries throughout Los Angeles.

The artwork on the packaging comes courtesy of her frequent collaborator, Sina Grace — a Los Angeles illustrator and close friend to Lewis. In fact, Grace designed an entire tarot deck with Lewis that provides a visual counterpart to each of On the Line’s eleven tracks.

“I guess I know more about witchy things now,” replies Lewis enigmatically when asked what inspired her to commission the art, which include images like Lewis holding a white dove and one of a pink rotary phone with daggers in it.

Overall, the vibe of the pre-rolls leans towards the psychedelic, from Grace’s tarot artwork to the backstory of the strain, the seeds of which can apparently be traced to a Grateful Dead concert from 1991. 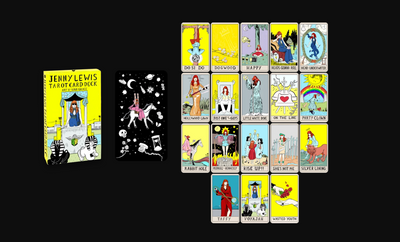 However, when it comes to what Lewis prefers to smoke, she’s not keeping any secrets.

“I'm really interested in weed that doesn't fucking lay you on your fucking ass,” she says. “I like the low THC stuff that's creative and not too strong. The stuff that doesn't make people pass out.”

The days of Lewis getting “I’m an asshole” scrawled across her forehead in a stoned daze are apparently now behind her. Today, the 43-year-old musician is more interested in a lighter touch when it comes to cannabis. Lucky for her, the industry is poised to rise to the challenge, as low-dose products continue to hit the market.

Lewis also has good fortune to thank when it comes to the venues she’s been playing in support of her new record.

“I've really lucked out,” she says of her last few tours, noting how perfectly the “Pueblo deco” design of the KiMo Theatre in Albuquerque or the Fremont Theater in San Luis Obispo, with its bold blues and pinks, matched with her current tour aesthetic.

Performing in a shimmering silver catsuit, Lewis’s On the Line stage design includes retro telephones that glow blue and pink and a piano custom-painted in pastels and adorned with a goblet from the famed Madonna Inn in California. (“It has tequila in it too,” Lewis confides. “Just a little bit.”) It’s kitsch juxtaposed with splendor each time she hits a vintage venue, and the symbiosis suits her perfectly.

Perhaps that’s what cannabis needs right now: a bit of symbiosis when it comes to the people, cultures, and even profiteers who all champion the plant in some shape or form.

We keep trying to figure out how pot should fit into everything. We argue about zoning for dispensaries and which legislative departments should oversee the industry. We debate whether insurance companies should cover the cost and how all the tax money being collected should be spent. We fight about the still-ongoing War on Drugs and how to best address the historic damages sparked by prohibition. Yes, pot has taken a central role in mainstream discourse, but the background behind it has yet to be filled in.

As Lewis sees it, finding a backdrop that reflects who you are can make all the difference. It might be a worn flag at a backyard NORML rally, a t-shirt at a Pride Parade, a concert venue that complements the stage design, or a striking neon sign beckoning customers to a new dispensary. It’s about finding what fits, regardless of the subject at hand.

“That's when you know you're on the right path,” Lewis says, “when the rainbow matches the room.”

MUSIC
CELEBRITIES
HISTORY
CULTURE
MORE...
Zack Ruskin
FOLLOW
Zack Ruskin is a cannabis and culture journalist living in San Francisco. Follow him on Twitter: @zackruskin.
Share this article with your friends!
AD
By using our site you agree to our use of cookies to deliver a better experience.
Accept
Decline
MORE FROM MERRY JANE