CULTURE
Inside Swami Select's Epic, Celebratory 4/20 Weekend in the Golden State
AD
"This past high holiday weekend was a constant contrast to the past, with moments that felt like flash-backwards and forwards at the same time."
Published on April 25, 2019

Nobody can resist comparing one thing to another. And the older you get, the more you have to compare. This past high holiday weekend was like that — a constant contrast to the past with moments that felt like flash-backwards and forwards at the same time.

4/20 Eve is when most serious cannabis celebrants get started. These days, that means a visit to their favorite source of cannabis in preparation for the big day, whether that be their small-time dealer friend down the street or their favorite dispensary nearby. Most retailers offer great deals and special discounts in honor of our cannabis Christmas. To take the pulse of our newest national holiday, we were in the heart of San Francisco, and the stoned buzz was palpable! 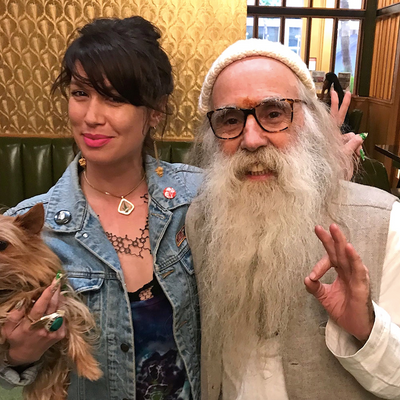 We started on Friday 4/19 in the SOMA district of SF at The Barbary Coast — a dispensary and historical timepiece that feels like an elegant saloon from the Gold Rush days. The long sales counter is an intricately-carved old wooden bar that no doubt used to serve up lots of liquor to dapper gentlemen with gold dust in their pockets. Past the main room is the Dab Bar area, which is equally refined, and leads through large glass doors into the Lounge. Red flocked velvet wallpaper and red leather banquettes welcome you to another time period. It’s a combination of early 1900s atmosphere and a lot of very cool urban stoners. There’s nothing like this place anywhere in the world. When the smoking lounge opened in July 2017, a new era dawned. The stigma had finally begun to lift.

After several joints shared with friends at The Barbary Coast, about 20 of us “paraded” up Market Street followed by a cloud of smoke. While it’s not exactly legal to get high on the streets of San Francisco, it is a “lowest priority” for the cops. Plus, everyone in California celebrates 4/20, right? It was starting to feel that way, at least.

Our destination was Moe Greens – sister store to Barbary Coast but with a whole other vibe. Instead of the elegant deep red and dark wood interiors, this was gold and green, literally like standing inside a huge cannabis plant on a sunny day, with golden light shimmering through the brilliant green leaves. We arrived just around 4:20pm, and settled into a healthy puffing session with more and more folks joining in. The mid-century design — again, with leather banquettes, but this time in a friendly avocado green and accompanied by dazzling gold-patterned wallpaper — brought us to another time warp, as if one would expect to see guests sipping martinis in such surroundings. But instead they were all smoking doobies or doing dabs. It felt so natural. Why have places like this not always existed? Finally, we can get high together in public places with no fear of judgment. This is huge when you compare it to the draconian laws we have faced over our lifetimes. 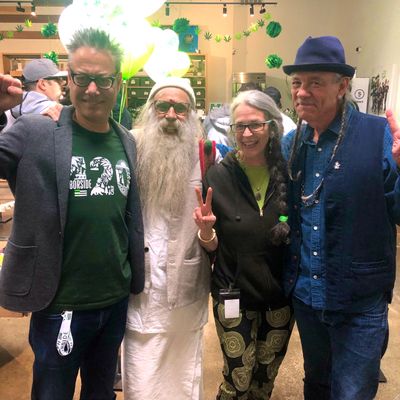 By 11am on the actual day of 4/20, we were already in another new reality: at the large, sleek Harborside dispensary in the industrial section of San Jose, near the heart of Silicon Valley. Festivities began around 9am with special deals and long lines to prove the popularity, and necessity, of this dispensary in the urban jungle. A jungle which was all orchards only 100 years ago. That may seem like a long time to you, but when you consider how much concrete has covered all that land in such a relatively short period, it is staggering.

We’ve been part of the Harborside family since their second year, back in 2008, so it felt great to be with founders Steve and Andrew DeAngelo and the rest of the clan, who have been fighting this fight for so very long. As progress is slowly made on most cannabis fronts (some very slowly), each April 20th has a few more freedoms around cannabis to celebrate. We have been getting high for over 50 years now, but are still amazed at the very existence of retail cannabis store-fronts and large public gatherings. Speaking of which, it was time for us to get in the car and make our way to Hippie Hill at Golden Gate Park.

Comparing the traffic in any metropolitan area between “then and now” is absurd, as we all know more and more cars jam overcrowded roads and freeways every day. We crept our way through city streets toward the park on the western edge, not fully aware of the immensity of this event and how many people felt the need to be together to celebrate cannabis. Wow! Carloads of laughing and dancing people surrounded us — these were not your regular citizens on an average day. They were all headed to the same place in the park. 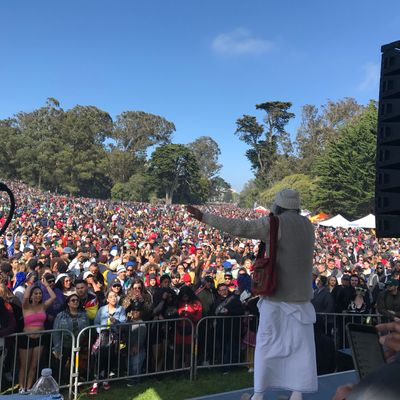 The traffic was so dense that we finally got out and walked. Taking shortcuts we knew from the old days got us through the park to the main stage in about 15 minutes. Flashbacks to the hippie era couldn’t be ignored as we rambled up those wooded pathways until finally we could hear the distant sounds coming from the main stage. 50 years ago, it would have been Jefferson Airplane or The Grateful Dead songs floating above the park. Now it was a DJ shouting something about “420 is coming” over hip-hop. You’d think he was talking about Jesus!

We continued to cruise through the crowds as they thickened until it seemed like the last hundred yards to the stage was a solid wall. People were so mellow, so high, so happy, so everything that we just flowed through the multitude. San Francisco is proud to be a welcoming city, a “sanctuary city,” and this crowd embodied it — every age, race, creed, and preference was there, colorfully costumed in every imaginable version of human (or animal) attire. Well, maybe no super-straight people — no guys in suits here, just a sea of friendly faces smiling as we mounted the steps to the main stage. There were almost 20,000 people, hooting and dancing and feeling good. 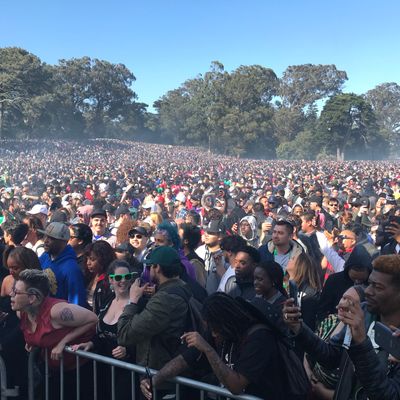 On stage, it was like an old school reunion. Besides all the fellow farmers and others in the biz who we already knew, the vibe was that even the folks we’d just met shared a love of cannabis, making us all brothers and sisters. The circles continued to intersect and overlay, indicating we really are one big family — those of us on stage together with the entire audience. It’s what cannabis does best; she brings people together, in Joy to Enjoy. You couldn’t help but dance!

Swami had been invited to lead the crowd in chanting three “Oms” just before 4:20pm, to bring the exuberant celebrants together through interactive sound vibration. It was a powerful rising cosmic tone we created, a grand chord of disparate voices — the Universal Sound became the call for cannabis. As Swami shouted out, “We built this city on rock-and-roll, and we built this culture on cannabis!” The resounding roar led the way into the official countdown to the sacred hour of Four Twenty. 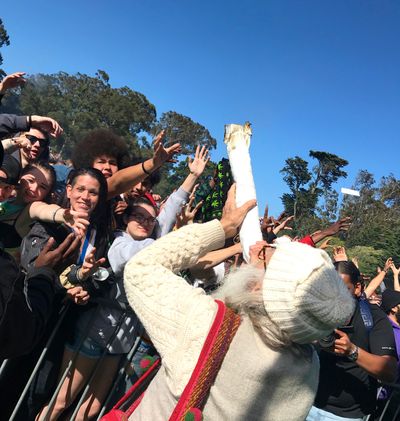 Within seconds of the countdown, the entire field and hillside before us was covered in a cloud of smoke, as everyone lit up in a Joint Celebration. Unlike New Year’s Eve, when kissing is the mode, this was all about sharing the weed with smiles and laughter. Magic ensued! We decided to join the crowd wandering through the masses of very stoned people, stopping for photos and hugs all along the way. The global family around us was one for a glorious moment in time, created by our common love of cannabis.

The final stop of the day was north of the city in lovely Sonoma County at a gorgeous home in the hills. Even though Swami may wear a skirt, the “Ganja Goddess Getaway” was a strictly women’s gathering, so Nikki got to enjoy this one on her own. Mama Sailene, the compassionate heart and co-founder of this private, members-only social club, welcomed me with open arms and a joint in her hand. Clearly, the women had a head start, as they were all dancing and singing and feeling very good when I arrived. As Mama Sailene explained to me, “We focus on using cannabis as a creative and spiritual tool to promote sisterhood and self-love.”

It was obviously working very well. After supper and dancing, we all sat under a tent on the lawn, with glowing halo wreaths placed on our heads. Several sisters made creative offerings to the group with a song, a story, or a dance. Most powerful to me were the tales of how cannabis saved these women’s lives, after their doctors had put them on too many bad drugs. They described how discovering this community, where they feel safe to share and express their feelings, was their savior. By the time I left that night, Easter was on the horizon, and I definitely felt not only high but raised, too! The spirit of 4/20 was ready to embark on yet another new year of changes.

420
LEGALIZATION
CALIFORNIA
HOLIDAY
MORE...
Nikki and Swami
FOLLOW
Known as "The Cannabis Couple," Nikki Lastreto and Swami Chaitanya have been proudly promoting cannabis use for decades. As cannabis cultivators in Mendocino County, the heart of the legendary "Emerald Triangle" region, Nikki and Swami are behind the brand Swami Select, producing taste and pure flowers grown in full sun with organic methods, plus that extra little Swami touch.
Share this article with your friends!
AD
By using our site you agree to our use of cookies to deliver a better experience.
Accept
Decline
MORE FROM MERRY JANE