CULTURE
Indica and Sativa Don't Cut It: A New System for Describing Weed Is Here
AD
"Indica" and "sativa" are social constructs. And we all know it! That's why Leafly and a team of labs and scientists crafted a new way to classify the ways our favorite plant makes us feel.
Published on October 1, 2019

No matter how dynamic, culture can also be stubborn. And the world of cannabis is no exception. The words “sativa,” “indica," and "hybrid" are deeply ingrained in the pot vernacular, despite the fact that the familiar system has notable shortcomings and doesn’t fully capture the marijuana experience. As a refresher, cannabis varietals are commonly described as belonging to one of two genetic lines with distinct traits, including leaf shape, plant structure, and psychoactive effects.

Sativas are said to have narrow leaves on tall, conical plants that produce flowers offering an energizing or uplifting high, while indicas have broad leaves, short and bushy plants, and offer effects ranging from a relaxing buzz to couch-locked stoney vibes. Hybrids, purportedly, possess a varying blend of these traits.

But this system lacks scientific backing and acknowledgment of the fact that each person’s endocannabinoid system and physiology can produce differing effects from the same weed. And there's also the fact that there are many private labs engaging in a "space race," of sorts, to complete a genetic map of the cannabis plant. Until that's finished, we don't fully understand how the plant produces differing levels of chemicals and compounds that inspire its varying psychoactive effects. Plus, with up to two-thirds of today’s available strains designated as hybrids, those known as “sativa” and “indica” are beginning to lose their significance.

So, as the evolution of the cannabis industry unfolds before us, what should consumers look for in flower if “indica” and sativa” — our old faithfuls — are no longer considered accurate?

Slate contributor Shannon Palus asserts that the terms have devolved into marketing jargon, a view also shared by several cannabis scientists she interviewed. Ethan Russo, the director of research and development at the International Cannabis and Cannabinoids Institute, believes that cannabis should be described by the presence and amount of cannabinoids and terpenes produced by each strain, which he says evolved as protection methods from insects and disease.

“In Russo’s ideal world, dispensaries would categorize their offerings by these chemicals, along with subjective feedback from users — a kind of giant master binder on the origins of the various kinds of highs,” Palus wrote. “But for now, ‘indica’ and ‘sativa’ are still the most widely understood classifications of all.” 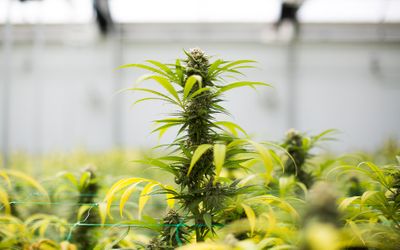 All that could change, however, with the introduction of a new method to describe cannabis. Leafly, the digital pot media platform, is on a mission to make pot vernacular more accurate — and it’s about damn time. Dubbed the “Leafly Cannabis Guide,” the info is based on crowdsourced data from user strain reviews and test results from a network of seven analytic laboratories across North America, including Confidence Analytics in Washington, SC Labs of California, CannTest of Alaska, ChemHistory in Oregon, MCS in Florida, PSI Labs in Michigan, and Anandia in Canada.

“Cannabis has unique physiological effects for each of us. As our understanding of cannabis grows, so does our need for a more sophisticated, yet intuitive language to help people navigate the very personal effects cannabis has,” said Leafly CEO Tim Leslie in a Tuesday press release. “While indica, sativa, and hybrid are a starting point for understanding cannabis, this form of categorization doesn’t take advantage of our growing understanding of the effects of the various compounds found within the plant.” 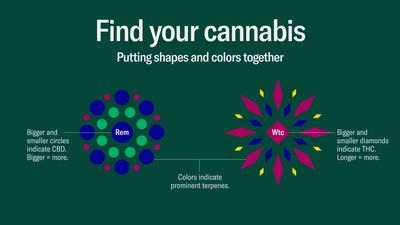 At the heart of the guide is a new visual language that uses shapes and colors to depict the major cannabinoids and terpenes produced by a particular strain. This information is expressed by different colored shapes aptly arranged into flower-like icons that now replace Leafly’s familiar strain tiles. The symbols are reminiscent of the periodic table of elements and was implemented throughout the platform’s updated site this week. That’s no small undertaking.

Since launching in 2010, Leafly has become one of the best online resources for information about cannabis, including strain reviews from its 15 million monthly visitors. All strains from the old guide will still be listed, but some will not have a flower visualization if the necessary lab data is not available.

Richard Maloney, a program manager at Leafly who’s been developing the new cannabis guide for the last year and a half, explained to MERRY JANE that the goal is to educate consumers about what, specifically, makes strains different and alike.

"We depict the cannabinoids with shapes and the terpenes with color,” Maloney said in a telephone interview. “And so now we're actually in a position where we can create a unique visual for a consumer with this language so they can better see the similarities and differences among the cannabis strains."

At the center of each visualization, an abbreviation of the strain name is displayed on a shape that indicates the primary cannabinoid as determined by aggregated test results, with a diamond signifying THC and a circle representing CBD. The color of this shape identifies the varietal’s dominant terpene: blue for myrcene, green for pinene, fuschia for caryophyllene, yellow for limonene, and orange for terpinolene. For instance, White Tahoe Cookies has a central fuschia diamond, indicating that it’s a THC-dominant strain with caryophyllene as its most prominent terpene. 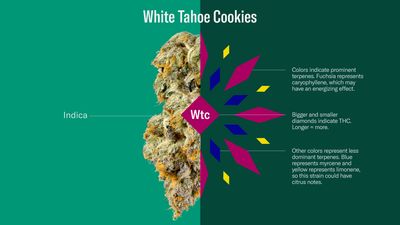 The central shape is orbited by three tiers of the same shape, the size of which indicates the relative amounts of the primary cannabinoid, while their colors depict the strain's other prominent terpenes. The surrounding diamonds, which are elongated to indicate a strain relatively potent in THC, are colored fuschia, blue, and yellow to express that myrcene and limonene are also prominent.

"We can begin to create these unique visuals so consumers can, through the shape and color, see the differences and similarities among strains," Maloney reiterated.

With that information, an online tool will then suggest different strains that are similar. Users can even create a visualization for their idealized strain, adding terpenes or potency at will. Results will often not reflect actual strains available in the marketplace, but Leafly’s software will be able to suggest strains that are similar, but different, to the idealized model.

In a dispensary, users can share the information gained from the cannabis guide with their budtenders for recommendations based on their preferences. Leafly is also developing plans that would allow growers and manufacturers to use the flower visualizations for their products on packaging and marketing, but those details have not yet been released. 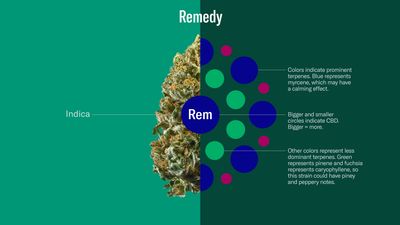 Maloney notes that many consumers will find the information conveyed through the visualizations sufficient for their needs. However, the tech also includes more details, such as average cannabinoid percentages and other interesting tidbits.

"For consumers who really do want to geek out and learn more about the cannabis they're consuming, they'll be able to click in and learn about what terpinolene is, for example, and other places in nature where terpinolene is found," he said.

Maloney hopes that the new guide will help stimulate a better appreciation for cannabis, saying “the market today is heavily controlled by consumers or patients wanting to find the highest THC percentages for their dollar. What this system is emphasizing is that there's a lot more going on within this mystical plant."

The platform’s principal research scientist, Nick Jikomes, Ph.D., believes the resource gives everyone the opportunity to more fully research and understand the effects of cannabis and the chemicals that influence the experience for users.

“We developed the Leafly Cannabis Guide to give everyone the ability to visualize, learn, and apply information about the amazing diversity of this plant,” he said in Tuesday’s release. “We’re embracing complexity while providing simplicity — and have created the most comprehensive way to explore cannabis strains yet. We’re excited to see the ways consumers, retailers, doctors, scientists, and others will use it to evolve the conversation around cannabis.”

Gallery — This Is Why We Love Weed:

To support the rollout of the new guide, Leafly is sending information kits to its network of approximately 2,000 retail partners across North America and is providing budtenders with learning tools to educate themselves. At the recent B2B cannabis expo Hall of Flowers in Santa Rosa, California, brands that were given a confidential preview of the guide gave it a positive reception, according to Maloney.

Whether Leafly’s new cannabis guide is embraced by producers, dispensaries, and consumers remains to be seen. But the system, with its roots in both science and consumer feedback, may prove to be useful for many. With the visualizations now incorporated into the platform, Leafly is clearly betting on its success. Stay tuned.

420
SCIENCE
PLANTS
DATA
MORE...
IN THIS STORY
CBD
Click to shop at our CBD store
A.J. Herrington
FOLLOW
A.J. Herrington is a freelance writer focusing on cannabis news, business, and culture and has written for publications including High Times, Sensi, and HEMP. When he's not banging away at the keyboard, you'll probably find him tending to his plants in the garden.
Share this article with your friends!
AD
By using our site you agree to our use of cookies to deliver a better experience.
Accept
Decline
MORE FROM MERRY JANE