CULTURE
What Is Live Resin? How incredibles Is Advancing the Freshest Form of Cannabis Consumption
AD
The incredibles team brings us on a deep dive into their next-gen work with live resin — the freshest and "loudest" form of cannabis that will enthrall industry connoisseurs and patients alike.
Published on October 8, 2018

All photos courtesy of incredibles

If you're a cannabis enthusiast, you've probably come across the term "live resin" to describe a specific kind of extract. With so many concentrates on the market, the various methods and technologies used to make them can be dizzying. It can be hard for consumers to know which brands are trustworthy and use only the safest, cleanest materials and methodology. In a conversation with the team from incredibles — an edibles, concentrates, and wellness product line based out of Colorado —  the masterminds behind their live resin extracts broke it down for us.

In short, live resin is the fresh, wet oil coating the cannabis plant. Sometimes referred to as crystals or trichomes, the resin not only gives the bud its frosty appearance, but also contains THC, CBD, as well as other cannabinoids and aromatic compounds. "Pretty much, all this stuff we're trying to get off the cannabis plant is resin, so that's the main goal in the extraction process," says Max Eisler, incredibles’ Director of Cannabis. "You're trying to isolate the resin and you can discard the plant matter because that's not the part that holds value."

Live resin, however, is a caliber of resin unto itself. Traditionally, when cultivators harvest cannabis, they dry it, cure it, then smoke it — but before live resin came into the picture, the resin was being extracted off dried material. "Live resin is the oil on the plant while it's still fresh, before it's been dried," says Eisler. It's what gives a still-growing cannabis plant its dank, pungent aroma. “There are different smells when it's wet; it's much more pervasive and prominent," he describes.

Among expert cultivators and connoisseurs, the strong smell of fresh, wet weed, pre-harvest, is called "loud” (others, however, use the term more broadly). Certain terpenes give the plant a louder smell when it's alive, and then disappear during the drying process. Live resin can also be called "fresh frozen" —it's the same exact thing — a name which designates the process of chopping down the plant fresh and freezing it while it's wet, explains Eisler. 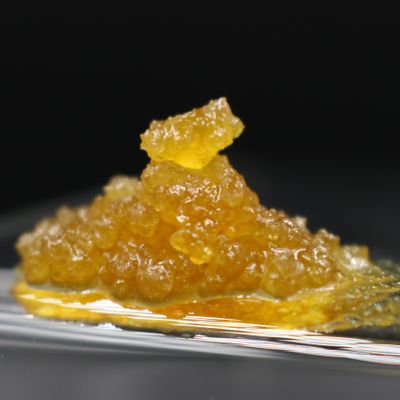 Who Could Benefit from Live Resin and Why?

"Anyone who needs therapeutic benefits from the cannabis plant is going to benefit from live resin," says Eisler — a point many cannabis advocates echo. "Live resin has everything that the plant provides as is, plus the additional robust flavors and aromas of the fresh plant. It's a more pleasant thing to experience, instead of letting something change as it dries. In my opinion, it's the most refreshing form [of cannabis].”

Live resin also has medicinal value because it encompasses the full spectrum of the plant's cannabinoids and aromatic compounds, enabling the entourage/ensemble effect to function in full force. Patients need more than just a single cannabinoid like THC, Eisler explains, pointing to the drawbacks of synthetic THC isolates like Marinol.

What makes one strain distinct from another is not just the potency of the THC. In fact, two strains could have the same exact amount of THC and still have vastly different effects because of each plant's specific profile of terpenes and other compounds. "The same strain in live resin form, versus in dry form, is going to have different aromatic compounds and terpenes," Eisler says. "As it dries, you lose more and it changes the experience for you." But live resin can only be taken from a fresh plant, the same way flower can only be smoked from a dry plant, because it's literally impossible to smoke wet weed. 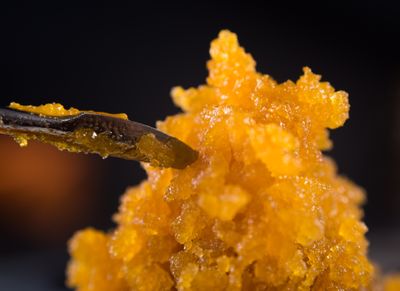 To extract the live resin, incredibles designed its own hydrocarbon extraction system, using a nonpolar solvent to extract the nonpolar constituents off the cannabis plant. Translation: Because water is polar, and oil (i.e. the live resin) is nonpolar, the system extracts and isolates in a similar fashion to when you mix oil and vinegar. Polar substances mix with other polar substances, and nonpolar substances mix with nonpolar, and the two polarities never commingle. So incredibles' system uses butane as a nonpolar solvent in order to dissolve all the nonpolar constituents, including the oils, resins, and aromas, leaving behind material like chlorophyll (which is what gives the plant its green color). The technology is so advanced because the incredibles team developed their own high-tech extraction process, then designed the technology to utilize it, rather than just adjusting their process to the technology available.

"In addition to having high-quality starting material and growing for the sake of oil extraction, our methodology allows us to manipulate the solvent at a colder temperature, and we have control over the exposure time, keeping it as short as possible," Eisler says. The less exposure the plant has to the solvent, the better. The cooler temperature makes the extraction process less aggressive, protecting the oil from picking up the impurities that come with warmer solvent methods.

incredibles developed its patented hydrocarbon extraction system out of necessity, Eisler explains. "We weren't machinists or welders, we were extractors who were unhappy customers with the available equipment," he says. "We, as users, knew what we needed out of a machine, and could tell professional people to build the equipment and how we needed it to be."

By controlling the entire process from seed to sale, incredibles can innovate around the specific products or consumer needs they want to address, rather than adjust their process to someone else's tech and methodology. "I think that's one of the hugest things," says Eisler. "Having an in-house grow and in-house extraction equipment makes it so everything we do is how we wanted it to be in our minds before we ever did it." 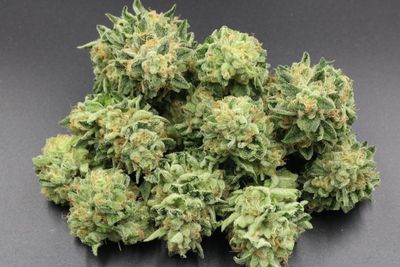 Of course, incredibles carries some classic, beloved strains like Durban Poison, but it also breeds its own varieties in-house — the most popular of which is the bright, citrusy Orange Soda. The strain has a "bright and exciting citrus flavor so orange-y that some people have a hard time believing that cannabis alone can recreate such a flavor profile," says Eisler. "With such a pleasing experience, it’s no surprise when we hear customers say it's their favorite strain from our library." Another popular in-house strain is Sour Band '09, a cross between Sour Diesel and Headband. It's a strong hybrid, attractive to growers and smokers, alike.

While incredibles didn't breed Sour Band '09, the brand does have exclusive access to it because of their association with the crew that's responsible for Chem Dog and the rest of the Chem genetics. “We have the official Chem family on the team, endorsing and verifying the genetics we have," Eisler says. "Nobody else can claim that in the regulated market"

incredibles' rare and valuable genetics contribute to their library of plants containing unique flavors and aromas. "A major trend we see emerging as cannabis consumers become more educated is that what truly differentiates a strain, beyond indica and sativa, are the terpene manifestations," says Lily Colley, incredibles’ national director of marketing. "Part of why we selected our genetic library is that when you find a plant with a truly amazing terpene profile, you want to maintain all the phytocannabinoids and terpenes in high levels." And through incredibles' extraction process, the terpene and cannabinoid profiles of these unique strains are preserved and transmitted through the consumer's experience with the concentrate. So, a strain like Orange Soda, for example, actually tastes like it should — "a strong, effervescent funk of ripe oranges, grapefruit, and citrus with a myriad of undertones," describes Eisler.

What Are incredibles' Products?

The newest product incredibles will launch is Black Diamonds, which will be available in October. "It's essentially a separation of crystallized THC and high terpene liquid from a single source material," says Eisler. For non-connoisseurs, that means it's an oil made from extracted THC and terpenes, mixed into the same jar, which naturally separates as the THC solidifies. Like many cannabis concentrates, Black Diamonds can be consumed via dabbing.

incredibles also makes a variety of vape pens, including a Sauce pen that's essentially a high terpene isolation from live resin put into a cartridge (in other words, the terpene portion of that Black Diamond mix), as well as another product called Liquid Black Label, which is also isolated through a proprietary process where the isolated THC is re-amended with isolated and purified terpenes. The latter just won a 1st place award in Colorado's recent "The Hemp Connoisseur Championship," as well as the "Connoisseur's Choice" Award. 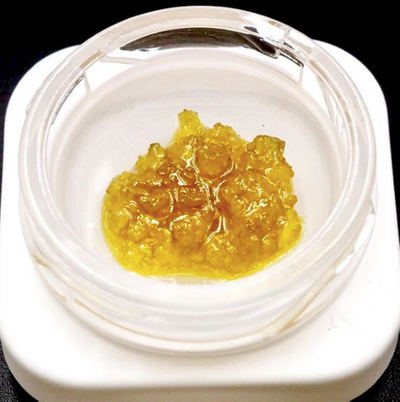 What's Next for incredibles’ Work with Live Resin?

The incredibles team is constantly on the lookout for new strains to continue expanding the variety and breadth of their offerings: new flavors, new cannabinoids, and undiscovered compounds.

"New genetics is the first thing I think about," says Eisler. But also, new consistencies. "Two years ago, nobody knew about Diamonds," he points out. And the industry's opinion about what's high versus low quality has shifted. "There was a time when shatter consistency was what everyone was going for; they wanted it transparent and brittle," Eisler recalls. "Now we've learned that extracts with more terpenes in the oil are softer. What we once thought was high quality is not as good as we thought." Shatter is a glass-type concentrate with a high terpene profile — but, as we've learned, it’s not the only concentrate to highlight terpenes so potently.

What's around the corner is hard to anticipate, Eisler adds. The incredibles team is looking to incorporate not just new strains, but new or more diverse cannabinoid profiles into its products, which increasingly includes the availability of compounds like CBN, CBG, and CBC. "All these other cannabinoids have gone overlooked because THC has been under the spotlight for such a long time."

Since live resin can capture such a pure essence of the plant, consumers can have access to a quality of cannabis products that weren’t accessible before, because technology like incredibles' simply wasn't available to enable cultivators to efficiently extract from a fresh, living plant. As the market sophisticates and demands more specific terpene profiles, the integrity that live resin and incredibles' technology provides will lead the wave into the future, creating even more innovative and beneficial ways to consume cannabis.

For more on incredibles, including where to buy their next-gen live resin, visit their website here

AGRICULTURE
420
TECHNOLOGY
RESEARCH
MORE...
IN THIS STORY
CBD
Click to shop at our CBD store
Madison Margolin
FOLLOW
Madison is a New York/Los Angeles-based writer who specializes in cannabis coverage. Her work has been featured in Playboy, the LA Weekly, and other publications.
Share this article with your friends!
AD
By using our site you agree to our use of cookies to deliver a better experience.
Accept
Decline
MORE FROM MERRY JANE