CULTURE
Iconic Artists and Musicians Reveal How “The Chronic” Inspired Them Forever
AD
Who’s your favorite rapper? We’ll bet a million joints, whoever they are, that they bumped the shit out of “The Chronic” at some point in their life. And to celebrate the album's re-release, we're taking you on a trip down music memory lane.
Published on April 20, 2020

“A lot of people owe their career to this album,” DJ Sway Calloway recently told NME. “There would be no Kendrick Lamar if it wasn’t for The Chronic. There would be no Game, no YG, no Nipsey Hussle.”

Dr. Dre’s seminal 1992 solo debut rocked the 213 and far, far beyond upon its release. Today, we’re witnessing the landmark album’s fourth official release, this time on all music streaming platforms worldwide. And to celebrate, MERRY JANE is hosting a special livestream at 4:20pm PST featuring a DJ set by Snoop Dogg himself.

To support the historic occasion, MERRY JANE is diving deep into the legacy of the infamous record that changed music forever. Below, we’ll spotlight some of the most groundbreaking artists and detail how The Chronic influenced not just the way they heard music, but how they made it themselves, too.

Fellow Compton native Kendrick Lamar is the first and only rapper to win the coveted Pulitzer Prize, America’s highest honor for accomplishments in literature, not music. If anyone still doubted whether hip-hop was poetry, Lamar finally put that question to rest in 2018 when he won the award for his album DAMN — which just-so-happened to be executive produced by Dr. Dre, as well.

But when Lamar was still a young buck and wasn’t yet riding high across the US airwaves, he filled his head with tunes from Dr. Dre’s The Chronic.

Lamar listed The Chronic as one of his top 25 favorite albums of all time. In 2012, he told Complex, “That was probably the first rap album I remember them playing in the house from top to bottom. Songs that I actually remember as a kid. That’s the start of them house parties I always talk about growing up.”

And what’s the most notable track on The Chronic according to Lamar? “Lil Ghetto Boy” for its masterful storytelling about how what a man puts into his ‘hood can come back to him — for better or worse. Fate went full circle in real life for these two hip-hop juggernauts, too: While Dre’s has produced some of Lamar’s biggest hits, Kendrick now writes many of Dre’s verses.

Even though Yeezy took a strange turn into both Christianity and MAGA Land in the past few years, his 2010 album My Beautiful Dark Twisted Fantasy reigns alongside The Chronic as one of the most influential hip-hop albums ever. West once said he wouldn’t release an album unless, at the very least, it matched Dre’s solo debut in production value.

“The Chronic is still the hip-hop equivalent to Stevie Wonder‘s Songs in the Key of Life,” Kanye told Rolling Stone in 2005. “It’s the benchmark you measure your album against if you’re serious.”

For the younger music lovers out there, Stevie Wonder’s Songs in the Key of Life was the first album by an American artist to debut at #1 on the Billboard Pop Albums chart. Big-time shit.

While most music historians and critics have focused on The Chronic’s impact on hip-hop, artists in other genres, namely rock and metal, drew inspiration from it, too. James “Munky” Shaffer, the guitarist of the quintessential nu-metal act Korn, told The Skinny in 2015 that some of his earliest riffs came from The Chronic.

“Head and I really enjoyed NWA when we first started — still do — and followed all of the solo careers they embarked upon in the aftermath, like when Dr. Dre made The Chronic,” Shaffer said. “He was using a lot of samples, and we were really trying to emulate that with our guitars.”

Remember how inspiration goes full circle? In November 1999, when Dre dropped his best-selling album, 2001, Korn also released their own, Issues. Dre’s album debuted at #2 on the Billboard charts, but, ironically, Issues kept 2001 from hitting the top spot, seeing as Korn’s debuted at #1.

The frontman for the dark industrial-rock act Nine Inch Nails was one of the first superstar producers signed to Interscope Records — and he did so around the same time that Dr. Dre joined Jimmy Iovine’s team. In 1994, Reznor produced the soundtrack for Oliver Stone’s splatterfest Natural Born Killers, and he included The Chronic’s “The Day the N***az Took Over” for the film’s climatic prison riot sequence. In fact, Dre’s piece is the only rap song on the entire critically-acclaimed soundtrack.

That same year, NIN released The Downward Spiral. Reznor’s song “Big Man With a Gun” bit gangsta rap’s “dick in the face” diss trope, possibly a tongue-in-cheek tribute to Snoop’s “bizzalls in your jizzaws” on The Chronic’s opening track.

Reznor has always been open about the funk and hip-hop influences on his music, which culminated in NIN’s most famous song, “Closer.” (Check out the song’s low, thumping bassline if you don’t believe us.) In a 1999 online interview with Yahoo!, Reznor wrote:

I'm a big fan of Dre. I've always respected everything he's done…. With Dre, he'd been a friend of mine for a while, and I wanted to pick his brain. He impressed me so much that I wanted to make a record with him. One that might transcend the way the world of music is right now. Music is a crucially human element that communicates with people. It transcends all racial and economic boundaries. I truly believe that.

Reznor finally got his wish to work with the Good Doctor, too: Dr. Dre helped mix one of the tracks on NIN’s third studio album, The Fragile. Listen to the drum beat in “Even Deeper” to catch some of Dr. Dre’s surgical precision in the mixing booth.

Just as The Chronic influenced rock and metal, it left a lasting mark on electronic music, too.

“It’s arguably the most important album in hip-hop history,” Barry Ashworth of the UK duo Dub Pistols told NME. “It was a genre-changing moment that brought us the sound of G-funk and changed the way rap music was perceived forever. It’s a timeless classic.” 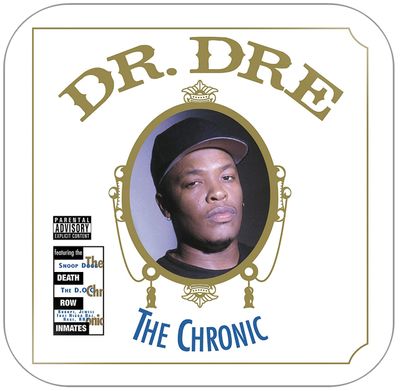 For more on The Chronic’s connection to the history of art, check out the Juxtapoz essay by the National Book Award laureate and children’s author (yes, you read that correctly) Kimberly Holt about the album cover, which played on the Zig-Zag rolling papers’ logo. She drew a comparison between the gave-no-fucks French soldier featured on the front of every Zig-Zag pack, who, according to legend, rolled up his smokes with his musket cartridge papers after an enemy combatant shot his pipe out of his hands.

It’s not difficult to imagine a young Dr. Dre going hard in the same way as the Zouave soldier if he lost his Phillies, too. And, y’know, if Dre also carried a musket.

DJ Sway got his start in the ‘80s rapping and break-dancing throughout the San Francisco Bay Area. Today, he’s the host of Shade45’s “Sway in the Morning,” where he challenges up-and-coming and established rappers to various freestyle games to see if they really eat, shit, and breathe hip-hop — or if they just “play a rapper on TV,” as it were.

Sway’s been part of the game since its earliest days, so he not only got to experience The Chronic when it was still fresh in the record stores (remember those?), he also saw its flawless beats and impeccable rhymes echo throughout generations of producers and lyricists ever since. Here’s what he had to say about the album:

Damn, we’re not sure if there’s another quote from an artist that can top Sway’s. So, we’ll leave it at that one. But we’re certain as a new generation of rappers come up, they’ll still be singing their praises to The Chronic as long as musicians are still dropping new bars. Which, hopefully, won’t stop until the end of time itself.

420
MUSIC
HISTORY
LIST
MORE...
Randy Robinson
FOLLOW
Based in Denver, Randy studied cannabinoid science while getting a degree in molecular biology at the University of Colorado. When not writing about cannabis, science, politics, or LGBT issues, they can be found exploring nature somewhere in the Rocky Mountains. Catch Randy on Twitter and Instagram @randieseljay
Share this article with your friends!
AD
By using our site you agree to our use of cookies to deliver a better experience.
Accept
Decline
MORE FROM MERRY JANE