CULTURE
How to Identify Primo Hash, According to the Expert, The Dank Duchess
AD
Hash is the oldest form of cannabis concentrate. But how can you distinguish the great stuff from the just-OK stuff? California’s The Dank Duchess is here to give you a crash course.
Published on January 17, 2020

In the West, most folks prefer to smoke flower. But in the East, and across much of Europe, people there prefer to smoke hash. In fact, in Central Asia, most tokers only smoke hash, as blazing flower there is seen as a crude, low-brow practice.

However, the art of making high-quality hashish is alive and well in the US. And while many of us can identify awesome flower just by looks and smell alone, most American cannabis consumers aren’t as well versed in identifying great hash, simply because it’s not as readily available, or popular, as bud.

To find out how the average consumer can identify excellent hash, MERRY JANE spoke with The Dank Duchess during a video call. The Dank Duchess, or just Duchess for short, is a student of the legendary Frenchy Cannoli, one of the most influential and famous hash makers alive today.

Duchess first met Frenchy in June 2014 during a cannabis competition. Since then, she’s gone on to become a professional consultant for California’s weed industry, though she’s recently traveled to Mexico to teach residents there how to make their own hash, too.

Duchess specializes in making pressed hashish, which is basically the heads of cannabis trichomes — also called “sugar,” “crystals,” or “kief” — pressed into condensed bricks or balls that resemble rich fudge. The process she describes here is known as “bubble hash,” where plant material is mixed with ice and water to produce a clean, solventless concentrate. 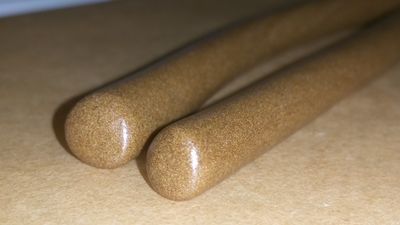 MERRY JANE: Can you briefly walk us through your hash-making process to start?

Dank Duchess: You “wash” hash by first choosing the right plants. Then, ice and water to process it, which is fairly easy. It uses a standard washing machine. You can do it by hand, but I don’t have good shoulders for doing it by hand. You just add ice, weed, and water, and agitate. What that does is it removes the heads off the trichomes.

Trichomes look like a stalk with a head. You don’t want the stalk; you just want the head. Agitation knocks the top part off. Then, you use a system of bags, to sieve, to collect, specific sizes of resin [through tiny holes in the bags]. Different sized trichome heads have different flavors. 73 microns [a micron is one-millionth of a meter] is the sweet spot, where you get all the “melt,” but you can have a 73-micron hash that’s actually pretty crappy and a 45-micron that’s much better. They’re just different sizes. However, the 73-micron and 90-micron sizes are generally where you get the best stuff.

After you dry it, some people will dab it. I press my hash instead, in the Frenchy style, which is pressing the hash with a hot water bottle to create a mash. There are a few reasons for using the hot water bottle, and one is that it partially decarbs the resin. Most of what’s in the plant is THCA. It’s when heat is applied to THCA that it converts to THC, which is what gets you high.

What’s the best way to dry it?

One of the best ways to dry hash is to use a freeze dryer. I’ve been using a freeze dryer since 2015, but sometimes you don’t have access to a freeze dryer, so you have to air-dry it, making it appear darker. So, this heady idea that light hash makes for better hash isn’t always true.

What are the advantages to consuming hash over smoking buds?

Smoking is actually a rather inefficient way of taking in cannabinoids. The thing is, when you take dabs, the dab lands on the banger, yes, it gets heated up, yes, the THCA gets converted [to THC], however, it doesn’t happen fast enough. The entire dabbing process takes about 15 seconds. But for full decarb, we’re talking 21 minutes. So, when I press my hash, some of that THCA has converted to THC, and the value of that is that it’s more bioavailable for me as soon as I smoke.

People that smoke pressed hash will tell you that the feeling that you get when pressed hash hits you is so much more powerful than when you’re smoking some of the finest, single-micron stuff. I’m not anti-single-micron. I love the beautiful flavor and everything, but when I’m choosing for meltability, flavor, effects, and how my entire body is going to feel, no question about it: It’s going to be pressed hash.

Are there any advantages to smoking or dabbing hash as opposed to dabbing hydrocarbon extracts like BHO waxes?

I’m not going to hate on BHO, but the truth of the matter is that solventless hash has no issues with worrying about whether there are chemicals in it. You don’t have to worry about whether someone off-gassed the BHO or PHO enough.

Now, CO₂ doesn’t have that issue at all, about off-gassing, but let me just tell you: CO₂ isn’t even in the conversation. At all. CO₂ is something you put in your vape because you need to make it through the airport, and you might land somewhere where you absolutely can’t have any THC. But no one’s ever like, “Omigosh, I want that dank CO₂!” And I worked with CO₂! In fact, the first hash I ever made was with CO₂.

The value of smoking hash over regular cannabis comes down to two things: efficacy and concentration. If you’re a person who needs to smoke three regular-sized joints to feel some pain relief, you may be able to take two dabs, and you’re done. And two dabs of whether it’s BHO or bubble hash or rosin — my preference is bubble hash over everything. With bubble hash, it’ll get you just as high and last way, way longer. 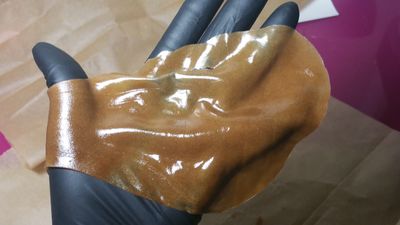 Is hash color a reliable way to distinguish good and bad hash?

Put the hash in the palm of your hands. With the thumb on your other hand, press hard into it. The 98 degrees between your palm and your thumb is more than enough heat to melt it slightly. As long as there’s oil content, it will melt, to a degree, meaning it will either coalesce together, or that resin that was hard like glass might soften on one side.

The next test is the melt test. It’s been done for who knows how long, and it’s easy. Just take a piece of resin, and apply fire to it. You want to bring the flame as close as you can [to the hash] without necessarily catching fire. If it doesn’t melt at all — nothing happens — that hash gets scaled as a 0 to 2. But if it melts a little bit but also chars up, that might be a 3. If it melts a whole lot more, but there’s still some discoloration, it’s a 4. If it melts, and it’s just falling all over the place, that’s a 5. And the top value is 6, if it bubbles all over the place and melts to near-zero. 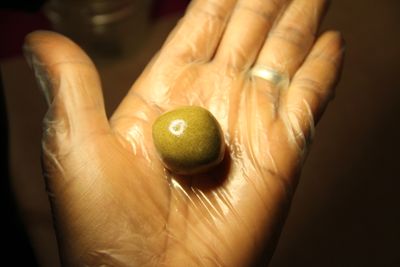 You mentioned earlier that your hash-making process starts with a good plant. What goes into good plant selection for hash?

So, the qualities of good buds for sale and the qualities of weed for making good hash are completely opposite. When you’re selling good weed, you want that weed where all the calyxes [the flower’s sepals, the part you break off of the stem to smoke] are on top of one another, and everything is nice and dense. But they’re terrible for making hash!

When making hash, you want free, easy-to-access resin. Dense buds do get broken up in the [bubble hash making] process, but that doesn’t really happen until the third run, maybe fourth. That’s not helpful. But if you have airy buds, then all surfaces can be agitated at the same time, right at the beginning.

Buck-for-buck, though, the best thing to wash, consistently, are sugar leaves. Just the baby leaves that were right around the buds, that’s sugar trim. The ones that are so covered in trichomes that some people may not even want to trim them off.

Sugar leaves give the nicest yields and the best quality. Of course, sugar leaves cost more than regular shake per pound. Typical shake may cost about $45 a pound, but a bag of good sugar can go for $150 a pound. But that’s opposed to a pound of nugs that may be $1,500. And you’ll get the same kinds of yield — and maybe even better yields — if you go with the sugar. 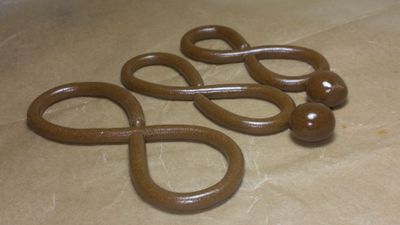 For dispensary customers who can’t perform melt tests, how can they distinguish quality hash from the bottom-shelf stuff?

All the people who make the phenomenal, heavy stuff just don’t have the money — myself included — to become licensed. I decided not to go back to the traditional market, but I decided to do consulting for people who have licenses. But for a lot of people, this is a straight, under-the-table situation. We still have seshes, and people sell their resin at the seshes, or most, probably, through known brokers.

How a person can really tell? At this point, it’s by reputation. For example, Tony Verzura of Blue River Terps is always doing cutting-edge stuff. And this is because the California regulations don’t let you take out the hash and hold it and smell it. Customers basically need to do research to see if a product will be good for them. It’s a hard road for the consumer. Any closing thoughts you’d like to leave with our readers?

Cannabis is a global affair. Every day, we’re hearing about a new country or province coming online. The West Indies is finally coming online, and some countries in sub saharan Africa, too. It’s pretty amazing. These countries also coincide with a general poverty level that is, in my opinion, unacceptable. Often, the people who have the least power, in this situation, are women.

My vision is to bring a few educators — just three or four of us — to these burgeoning cannabis communities, to teach women second-tier services like hash-making and rosin-making so they can bring those skills to their cannabis industries from the beginning. I want to actually leverage my name and what I know and teach it for free. Teaching women these skills will make them invaluable in these burgeoning industries.

Education will free us. That’s what I can bring to the situation that’s both philanthropic and will fulfill my dream where everyone can take care of their own health. Because, at the end of the day, that’s what I feel: We should all have agency with what we’re consuming and how we’re taking care of ourselves.

I can show the average person how to buy the right hash, but in all honesty, for a relatively small amount of flower, someone can make their own hash. Got a hundred grams of sugar leaves? You’re set.

INTERVIEW
HASH
CONCENTRATES
ICE WATER HASH
MORE...
Randy Robinson
FOLLOW
Based in Denver, Randy studied cannabinoid science while getting a degree in molecular biology at the University of Colorado. When not writing about cannabis, science, politics, or LGBT issues, they can be found exploring nature somewhere in the Rocky Mountains. Catch Randy on Twitter and Instagram @randieseljay
Share this article with your friends!
AD
By using our site you agree to our use of cookies to deliver a better experience.
Accept
Decline
MORE FROM MERRY JANE