CULTURE
How to Get Rid of the Smell of Weed and Smoke
AD
Some tips and tools for deodorizing your dank, from traditional methods to futuristic de-fuming techniques.
Published on May 8, 2019

Not everyone likes the smell of sweet kush. In fact, a recent study suggests that 51 percent of Americans deem the scent of ganja to be a nuisance. While we at MERRY JANE love nothing more than a whiff of some fresh bud, clearly others don’t share the sentiment. So, how do you turn down the loudness?

Renters are among those who are at the highest risk of detection and need to mask weed odors from invasive landlords and neighbors. In many states, landlords commonly declare rental properties “smoke-free” and they can legally ban tobacco and cannabis smoking, even in states where cannabis is legal. In the absence of “smoke-free” designations, evictions are a little more complicated. But unlawful detainers are generally processed at the state level, and state courts may choose to comply with state law in legal states. Cases vary. Even medical cannabis patients with a valid disability are not necessarily protected by the Fair Housing Act, a federal bill, because any judge could point to the illegal status of cannabis at the federal level.

Hotel guests are also at risk. Hotels commonly charge $200-500 or more for “cleaning services” or a “smoking fee” if a cigarette or joint triggers a smoke alarm. This is especially a problem if the room’s on your company card. If you happen to book a room in a progressive area like Colorado, Oregon, California, or even Washington D.C., cannabis bed-and-breakfasts are now “a thing” and allow cannabis consumption on-site, though weed-friendly hotels are not the norm.

The most optimal way of minimizing the smell of weed is through strategic odor prevention and a little common sense. In the event that you’re caught off-guard when consuming cannabis in an apartment, a hotel room, or any other space, there are a lot of methods you can utilize to avoid detection before — and after — a smoke session. 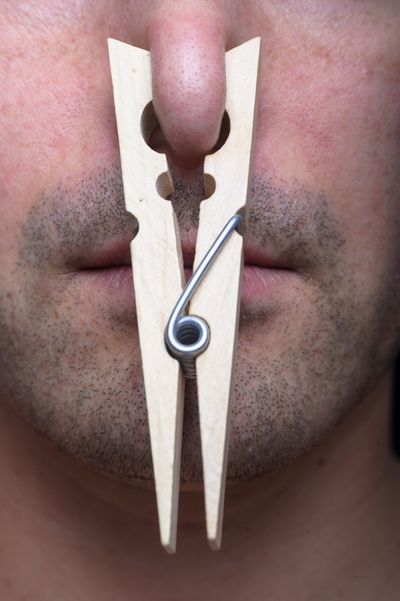 How to Prevent the Smell of Weed Before a Session

It goes without saying that you should avoid taking unnecessary smoking risks when less detectable routes are available. To start, consider a less smelly delivery method like vaping when you’re in a space that’s more likely to be disrupted by outsiders. You should also take small, seemingly-obvious preventative measures to hide the smell, such as assessing the ventilation or placing a damp towel over any door or window cracks.

The smell people tend to notice most from cannabis comes from it being smoked and exhaled. To prevent this, try fashioning a homemade smoke filtration device, commonly called a mute, a sploof, or a whoopee, depending on your geography. These are made with a toilet paper or paper towel roll, dryer sheets, and a rubber band or duct tape to secure the dryer sheets. After taking a hit, blow the smoke through the tube and let it filter the smell through those starchy dryer sheets. Or, if you lack those engineering skills, buy yourself a Smokebuddy personal air filter to exhale hits through. Blow the smoke though the tube, and the odor will get trapped and stay inside the nifty device.

Baking soda is a trusty starchy ingredient that has been used for generations as a natural odor eliminator. It sucks up dank smells quickly. Find a shallow dish and fill it with 2-3 inches of baking soda powder. Just stir, leave it in the room, and let the baking soda work its magic. Multiple dishes may be needed to tackle the stench in larger rooms. When used regularly, it can keep smells trapped the same way it’s used by grandmas to deodorize refrigerators.

Sometimes the most salient smells emanate directly from the buds in your fresh stash. Cultivars like Sour Diesel, Cheese, or Skunk varieties are especially pungent. Minimize smell by storing your weed properly. Use containers that trap the cannabis smell like Smelly Proof bags, or store your nug in an airtight Mason jar. There’s a place and time for everything, and it’s probably not best to have your stash chilling out in open view, as you never know when you may receive unexpected visitors at your home away from home. 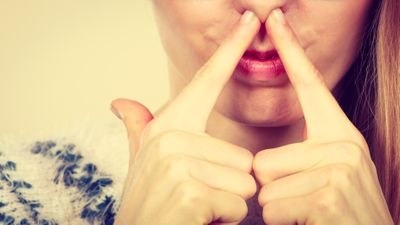 How to Reduce the Smell After a Session

Burning incense or a candle will likely draw more attention to your smoke sesh — a dead giveaway. But to your advantage, most people admit that the weed smell fades faster than cigarette smell. According to some, cannabis smoke or vapor — being oil-soluble — sticks to fewer surfaces than tobacco smoke. Tobacco is water-soluble, so it can adhere to more objects, including moisture trapped in the carpet, furniture, drapes, and so on. That said, cannabis smoke residue can bind to your skin, so before leaving your private quarters, wash your hands and face.

It may be time to invest in an air purifier. According to The Boston Globe, activated charcoal and carbon filters kill weed smells the best. Upscale filter-based air purifiers like the Alen BreatheSmart Classic, the LEVOIT Air Purifier, or the top-rated RabbitAir MinusA2 Ultra Quiet powerfully remove all odors from the air, as well as pollen, dust, and dander. Odor Free’s “Hotel 350” clears up to 800 square feet of space and is ideal for capturing “tar vapors” and cigarette smells in smaller spaces like a hotel room. The alternative is using air ionizers that use electricity to produce negative ions, which bind to particles and allergens. These will subsequently fall to the ground, and can be swept up like dust.

Popular air fresheners like Febreze can mask smells — to an extent. Products like Febreze do contain starchy ingredients like cyclodextrin that help to trap odors. Beyond Febreze, there are several other options available. Since the 1970s, Ozium has been “a stoner’s best friend,” as it is one of the most powerful air sanitizers and deodorizers on the market. It not only perfumes the air like Febreze, but it also sanitizes the air.

Kill two birds with one stone: Satisfy the munchies and cover the giveaway cannabis smell by cooking a spicy meal. Aromatic ingredients such as garlic, onion and ginger will do the trick. One note, though: If you want to whip up a dish with weed in it, you might want to decarboxylate your cannabis first — the process can be stinky. Once that’s complete, the rest of the meal’s ingredients will cover the smell, leaving you both stoned and safe from nosy neighbors. After all, the nose knows.

Related: What Is a Sploof and How Do You Make One?

HOW TO
HUMOR
PRODUCT
CULTURE
MORE...
Benjamin M. Adams
FOLLOW
Benjamin Adams is a freelance writer whose work has appeared in a slew of publications including CULTURE, Cannabis Now Magazine, and Vice. Follow Ben on Twitter @BenBot11
Share this article with your friends!
AD
By using our site you agree to our use of cookies to deliver a better experience.
Accept
Decline
MORE FROM MERRY JANE