CULTURE
How Long Does It Take For Edibles to Kick In?
AD
To understand how edibles work is to understand the self.
Published on April 5, 2019

Everybody has a story about the time they ate too many edibles, especially if you’re a longtime cannabis consumer. Circa 2012, everyone was left to their own devices (and kitchen appliances) to concoct edibles. The concept of microdosing hadn’t infiltrated the zeitgeist yet, and most edibles hit a triple-digit milligram number. Then, it was normal to be stoned for three days after consuming a brownie or cookie — and then subsequently feel like you’re dying. The lack of education and regulation around medicating with weed-laced treats was rough: no one knew how much to eat, how long it took for edibles to kick in, or why people had such different experiences with infused snacks.

At a very basic level, everyone’s body is different. That’s why it’s difficult to state definitively how THC is going to impact a given consumer. While five milligrams of THC might be enough to glue one person to a couch, 100 milligrams might be the dose of rocket fuel needed to get another person out of bed. And while one person might feel the effects of an edible 30 minutes after eating it, someone else might start feeling high two hours after consuming.

The legalization movement has helped create space for education, which has led to an improved understanding of how cannabis interacts with the body. It’s also lead to an overwhelming influx of products available to consumers — especially in the realm of edibles. From tinctures to laced cookies to medicated lemonades to magic mints to THC popcorn and power bars, there’s an edible for everyone these days. But there are things to consider to help you make informed choices about your edible intake. 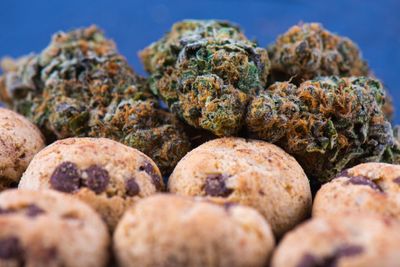 Your metabolism impacts the edible experience

One of the most common mistakes novice cannabis consumers make when dabbling with edibles is not giving your body enough time to metabolize the laced treat before assessing whether you should eat more. It’s hard to know sometimes because it can take anywhere between five minutes to two hours for an edible to kick in. The onset depends on a few factors: what type of edible you’re consuming, your metabolism, how much you’ve eaten that day, and your surroundings.

The best advice is to err on the conservative side: start small and wait two hours. Or “start low and go slow,” to use a canna-cliche. Depending on how much you’ve eaten that day — and how soon after eating you consume an edible — will determine how quickly you feel high. So if you’ve eaten a big lunch with lots of carbs, it might take closer to two hours to feel the effects of an edible, regardless of how many milligrams it contains. If you decide to pop an edible first thing in the morning, it’s likely you’ll feel it closer to the 30-minute mark. If you eat an edible after eating a solid salad, you’ll likely feel the magic around the 45 to 60-minute mark. 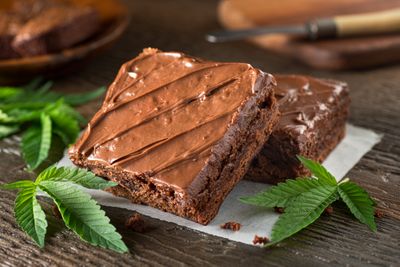 Some edibles will hit you quicker

Legalization has also lead to the advancement of absorption technology. So, unlike the solid-food edibles (think: brownies, cookies, pastries, and candy) that go through your digestive system before entering the bloodstream, there are other canna-laced products with fast-acting technology. For example, Mondo Meds makes a cannabis powder that dissolves in whatever you put it in. Because it’s already broken down, the cannabinoids in the product quickly bind to cannabinoid receptors.

“When you put it in your mouth, [the cannabinoids] are absorbing immediately through your carbohydrate uptake pathways. Your body recognizes it as a carbohydrate,” Skyler Bissell, COO of Oleo Inc, told MERRY JANE in 2017. Getting absorbed through this specific pathway increases early onset. So it’s possible to feel the effects within 10 to 20 minutes.

Then there are edibles with sublingual technology. These infused meds usually come in the form of breath strips, sprays, or tinctures, and require being put under the tongue to trigger the technology and allow the product to work accurately. This application is rooted in science and among the most effective ways to consume cannabis. It’s also utilized by an array of over-the-counter medications. Since cannabis is absorbed through saliva glands, one should expect to feel the THC-onset between five and 15 minutes. 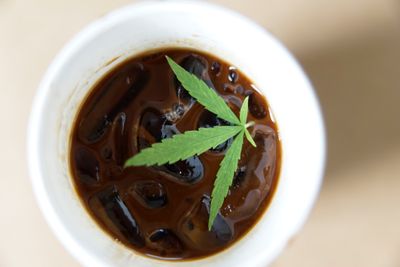 Then there are medicated beverages, like cannabis tea, coffee, Kombucha, water, lemonades, etc. These drinks are closer in onset with solid-food edibles in that they can take a moment to hit, so it’s recommended to take it slow — and don’t drink the whole bottle. Start with a cocktail-on-the-rocks amount of the beverage, or make the liquid into ice cubes and put the tasty ice cubes into another drink for a conservative dose.

If you’re having a medicated drink on an empty stomach, expect to feel THC creeping into your consciousness around the 30-minute mark. If you’re drinking it with food or you’ve eaten a full meal, expect to feel the magical herb after about an hour.

Keep in mind that everyone reacts to cannabis differently — again, it’s better to start slow. Unless, of course, you want to be lit like a birthday cake for three days. And sometimes, that’s just what we need.

420
EDIBLES
FOOD
RESEARCH
MORE...
Mary Carreon
FOLLOW
Mary Carreon is an award-winning journalist from Southern California and the Associate Editor at MERRY JANE. She’s drawn to stories about cannabis and the environment, social equity, veterans, the history of weed in California, and the rise of psychedelics and plant medicine in the 21st century. You can find her bylines in KCRW, Billboard, DoubleBlind Magazine, Forbes, CA Leaf Magazine, Kitchen Toke Magazine, OC Weekly, (the OG) LA Weekly, High Times Magazine, and more. Mary loves green juice, coffee, and red wine equally — but not at the same time. When she’s not reporting, you can find her doing yoga to Ravi Shankar, or migrating towards the nearest venue playing the best music. Follow Mary on social media @maryyyprankster or visit her at marycarreon.com
Share this article with your friends!
AD
By using our site you agree to our use of cookies to deliver a better experience.
Accept
Decline
MORE FROM MERRY JANE