CULTURE
How Do You Make Weed-Infused Coconut Oil?
AD
As products made with cannabis coconut oil continue to saturate the market, take comfort in knowing you have the option of skipping the dispensary by making your own at home.
Published on December 12, 2019

If you’ve eaten a weed edible or applied a medicated balm recently, odds are decent that you’re one of many consumers to enjoy the benefits of cannabis-infused coconut oil.

There are a number of valid reasons why this infusion medium has become so popular today. Back in the time before legalization, many weed items were prepared using cannabis-infused butter. As a readily-available ingredient that is easily assimilated into existing recipes that call for “regular” butter, infused butter was the gold standard until some modern-day consumers proved there was a market for more health-conscious alternatives.

That demand has led to an increase in products that use either coconut oil or olive oil, though between the two, the former again has an advantage when it comes to cannabis. The reason has to do with coconut oil’s potency as a binding agent, which stems from its high concentration of fatty acids. The more saturated fats a viable substance possesses, the more cannabinoids it can retain. Given coconut oil contains a saturated fat content of over 80 percent (versus less than 20 percent for olive oil), it’s quickly become a staple ingredient for a number of the industry’s top edibles and topicals brands. 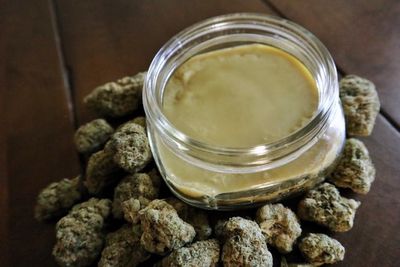 Given the high saturated fat content of coconut oil, one may reasonably wonder what makes it a healthier alternative to butter.

The main point to clarify is that not all saturated fats are created equal. While the saturated fats in butter are known as long chain fatty acids (LCFA), their counterparts in coconut oil are instead medium chain fatty acids (MCFA). The difference is in how our bodies process these acids, with MCFAs breaking down rather easily while LCFAs take longer, and, as a result, are often absorbed inside us as fatty tissue.

Coconut oil also possesses additional health benefits. Unlike its dairy cousin, coconut oil contains desirable things like lauric acid, which has antimicrobial properties. It has also been found (in its non-infused state) to promote weight loss by burning fat, to help keep hair and skin looking healthy, and even to alleviate some symptoms of dementia.

Now that you know the power of cannabis coconut oil, let’s learn how to make it!

How to Make Cannabis-Infused Coconut Oil

Start by grinding one cup of cannabis flower. You don’t need to pulverize it — just grind it as you would in preparation for rolling a joint.

Once you’ve added the flower and oil, the goal is to allow the THC to activate by means of decarboxylation. This is achieved by cooking the flower and oil together for a sustained period at a low temperature. Putting a precise amount of hours on it is tricky, but common wisdom says four to six hours (with occasional stirring throughout) is a safe baseline for slow cookers. If using a double-boiler, consider six hours the minimum, with eight hours as the ideal.

During this period, a small amount of water may be added to ensure no scorching occurs. In terms of what temperature to use, something in the range of 180°F-240°F is preferable. When your cannabis coconut oil is sufficiently infused, you’ll next want to strain it, either through a standard strainer or cheesecloth. Once you’ve done that, you’re ready to store your new ingredient and decide how best to use it! 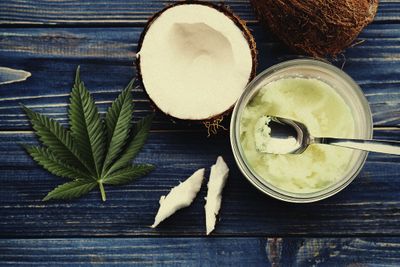 In terms of shelf life, cannabis coconut oil is best used within two months, though one can always stick it in their fridge to extend that timeline a bit. As a point of clarity, your oil is never going to “go bad” and pose a health risk, as much as the cannabis will no longer retain its potency after a given amount of time.

As far as what to do with your coconut oil, the choices are quite honestly endless. A few popular options include portioning the oil into capsules, using it in place of olive oil or canola oil in recipes, or utilizing the substance as the base of a homemade balm or rub.

As products with cannabis coconut oil continue to saturate the market, take comfort in knowing you now have the option of skipping the lines by making your own at home!

EDIBLES
HOW TO
RECIPE
EDUCATION
MORE...
Zack Ruskin
FOLLOW
Zack Ruskin is a cannabis and culture journalist living in San Francisco. Follow him on Twitter: @zackruskin.
Share this article with your friends!
AD
By using our site you agree to our use of cookies to deliver a better experience.
Accept
Decline
MORE FROM MERRY JANE