Talavera artisan Virgilio Pérez García doesn’t smoke weed, but there’s no denying the fact that he’s contributing to Mexico’s cannabis culture. Pérez founded a ceramics workshop on the outskirts of the city of Puebla 29 years ago. Today, the ceramics-strewn compound of buildings is where he creates immaculate bongs — along with other types of ornate pottery, such as plates, bowls, and tiles.

Initially, he thought that making talavera destined for use by cannabis consumers — in Puebla no less, a town hardly known for its progressive views on marijuana — would be a fruitless idea. But Jerry Rodríguez, a 25-year-old stoner who collaborated with Pérez on a Pop Art-inspired talavera houseware line, was enamored with the idea of stoner-friendly pieces made with traditional Spanish and Mexican ceramic techniques. In 2014, Rodríguez asked his collaborator to bring the talavera bong of his dreams to life.

"I said, ‘Really?,’” remembers Pérez. “‘We're going to start making that?’ I thought he was wasting time.” But what began as a desire to create a one-off water pipe would eventually grow into a local project that’s aiming to create social continuity among cannabis consumers. It’s also another milestone for the acceptance of marijuana consumption in Mexican culture. 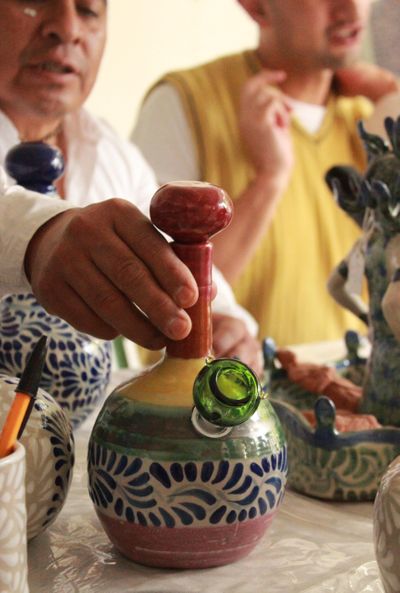 “The talavera is a part of us, of the city,” says Rodríguez, a clean-cut government employee who grew up in his grandparent’s talavera-covered ranch in San Martín Texmelucan, a small town outside of Puebla. “At the end of the day, being exposed to those colors, designs, textures influences your creative process, your growth as a person and an artist.”

Rodríguez associates talavera with the warmth of home and spending quality time with family. “I wanted to have a bong made from talavera because I needed it to decorate my house, to decorate my life,” he says (you can listen to our interview on my Spanish language radio show, Crónica.)

Pérez shares the view with Rodríguez that talavera must adapt to modern uses to stay relevant. At Rodríguez's behest, he created a design based on a traditional talavera licorero, or liquor decanter. Except, he added a hole at the base of the piece specifically for a glass stem and a second perforation for a carb. After three months of tinkering, a prototype talavera bong was born.

Rodríguez loved his new piece, which was originally meant for his personal use alone. But the bong was a huge hit among his friends, of course. That’s why he launched Talavería Canna in November 2020. The brand is a collection of stoner gear that’s crafted in Pérez’s venerable workshop — known as “Casa Virgilio Pérez.” Originally sold at Mexico City cannabis events, Talavería Canna now does brisk business, selling roughly a hundred pieces a month to clientele in Mexico and the US. Its bongs, pipes, stash boxes, and ashtrays all bear the distinctive, culturally-rich aesthetic of talavera poblana. It is such an ingrained part of Mexican culture that the technique is now recognized by UNESCO (the United Nations agency that encourages global culture and science education in pursuit of world peace) as intangible cultural heritage.

"It's good,” says Pérez, reflecting on his own perspective shift regarding the Talavería Canna project. "Here we are, making it happen together.” 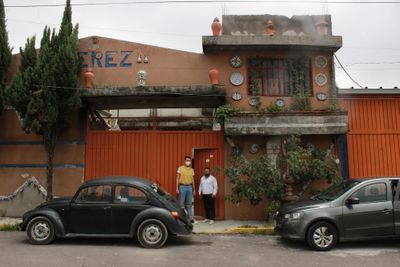 Pérez and Rodríguez are not the only ones invested in keeping the rich legacy of talavera alive and relevant for future generations. Casa Virgilio Pérez was among the talavera workshops to receive its official certification in 1998 after a 1995 decision by the Mexican government to preserve the ceramic artform as a regional denomination (champagne and tequila enjoy similar protections in the northeastern region of France and the Mexican state of Jalisco, respectively.). Pérez was present at the 2019 ceremony in Bogotá in which UNESCO recognized talavera from Spain and the Mexican states of Puebla and Tlaxcala as official cultural heritage, a designation awarded to cultural practices spanning a number of subjects, including performing arts, community events, and crafts.

The talavera technique carries design influences from countries, such as Iran and China. It likely arrived in Mexico via Spanish artisans, some of whom set up shop in the colonial town of Puebla around 1550. Ceramicist and historian Emma Yanes Rizo found evidence showing that a diverse assortment of poblanxs including Spanish, Criollo, Indigenous, Chinese, and even enslaved people from Africa labored in these original talavera workshops. Never veering far from the Spanish design traditions, these workers developed a distinctly Mexican talavera aesthetic. The ceramics are distinguished by their off-white base with blue, yellow, black, green, orange, and mauve colored designs created with dyes made from materials like tequexquite mineral salt, which makes the color blue; copper that creates hues of green, and tin to help make black.

Perhaps it’s not surprising that talavera found its way into the country’s cannabis culture, as increased access to the drug continues to grind its way through the political system. (Heavily restricted forms of medicinal cannabis have been legal since 2017, and this year a Supreme Court declaration introduced permits for Mexicans to cultivate and consume marijuana. The creation of an adult-use industry is ostensibly among lawmakers’ priorities in the current legislative session.) In Puebla, even the logo for Colectivo Toque Poblano, the collective behind the city’s first cannabis fair called Toque Fest, is ringed with a traditional talavera design. 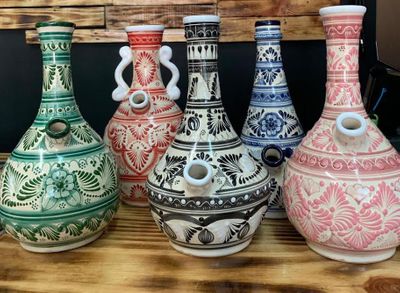 Talavería Canna is not the first project to commercially sell talavera bongs, however. That honor goes to Mr. Pipa, a smoke shop that started selling talavera bongs in March 2019 in Tlaxcala, another traditional center for the iconic ceramic style. “We looked for a way of materializing the idea, from how to make the design to how to convince the artisans that they wouldn’t be committing any crimes [by making the bongs.],” writes Ricardo Velarde Blancas, the founder of Mr. Pipa, in an email to MERRY JANE.

They came up with a stunning tribute to Tlaxcala history and culture with four uniquely shaped bongs, each representing one of the pre-Hispanic states of Tlaxcala: Quiahuixtlan, Tepeticpac, Ocotelulco, and Tizatlán. They are made with traditional talavera techniques by the workshop “Casa Talavera Del Carmen,” located in the Tlaxcala town of San Pablo Del Monte. “It’s an act of cultural diffusion, of conservation of tradition, of love for our state and for Mexico, a revindication of Tlaxcalteca culture, of respect and admiration for the plant, and a personal pleasure and pride to be the first to diversify and open the door to an industry in which everyone wants to participate,” writes Velarde.

The people behind the elegant talavera bongs are not the only people evolving ceramic smoking paraphernalia. Several artists craft pipes to be genuine pieces of art. For instance, Luisiana Flores’ brand Hot Pink and its iconic strawberry pipes; Macusi Pipes with its sleek sculptural bongs and pipes; and Kamejaus Taller with its annual convocation of smoking artisans for the exhibition-sale event, Biennial of the Pipe. But the talavera bongs relocate the consumption of cannabis within Mexican tradition — literally, by channeling one's weed smoke through artisan pieces made with ceramic techniques that have been passed down for generations. For a country that has centuries of untold marijuana history, the crafting of cannabis ceramics feels like a reclamation of sorts.

“The purpose of craft, its reason of being, is to accompany us in our day to day lives, to be witness to that process,” says Rodríguez. “It's an art that doesn't have that sacred aspect of a museum piece because you can touch it [and] have it in your home. To make art that accompanies a society's life, that will always evolve as society evolves — that’s why we use contemporary, modern talavera techniques. We have to find a way to stay relevant."

CULTURE
MEXICO
BONGS
POP CULTURE
MORE...
Caitlin Donohue
FOLLOW
Caitlin Donohue is a Bay Area-raised, Mexico City-based cannabis writer and author of She Represents: 44 Women Who Are Changing Politics and the World. Her weekly show Crónica on Radio Nopal explores Mexican marijuana culture and politics in the prohibition era. Follow Caitlin on IG @byrdwatch.
Share this article with your friends!
AD
By using our site you agree to our use of cookies to deliver a better experience.
Accept
Decline
MORE FROM MERRY JANE