CULTURE
“High Society” Spotlights Brits, Cops, and the Elderly Getting Introduced to Pot
AD
The Channel 4 series received criticism for being too nonchalant in its depiction of weed use, but the creators consider it a “study of human relationships, told with warmth and humor.”
Published on September 27, 2019

All photos courtesy of "High Society"

Could a British TV show about relationships taking place in an Amsterdam cannabis café dispel myths about the plant and help couples, friends and relatives better understand each other under the haze of joint smoke? That’s what Channel 4’s High Society: Cannabis Café aims to do, amid controversy and criticism that it’s treating “casual drug use with a flippancy afforded only to the privileged,” according to one columnist.

If the show sounds familiar to MERRY JANE readers, we reported on the first episode’s most notable incident, when two former drug squad cops caught up over a joint, with one of them suffering a “whitey” and quickly getting sick from the high. The show’s mission is to film British folks visiting the Coffee Shop cannabis café in Amsterdam, with cameras and mics catching how they approach cannabis and how they sort through conflicts bubbling up among the visitors.

“In the end, it’s a relationship show,” Steph Harris, executive producer of High Society: Cannabis Café, told MERRY JANE in a phone interview. “Cannabis can foster intimacy and can break down barriers, and for some people, using cannabis is something they want to cross off their bucket list.”

It’s hard not to find 84-year-old grandma Maureen endearing in episode one, when she hits the Volcano to acquaint herself with the plant her grandson enjoys so much. Also, in the second episode, a group of older friends who perform in a choir decide to try various ways to consume cannabis at the café, from Volcano bags to joints. Their random giggles and jokes will be recognizable to anyone who’s watched seniors get high for the first time.

The first episode aired on Channel 4 on September 3rd and episode two debuted on September 10th. Harris said her team is waiting to see if they get greenlit for more episodes.

Producing a reality show about cannabis in a country where drug laws still prohibit cannabis use is bound to rattle TV columnists and politicians, and High Society provoked reactions as soon as it aired. Making headlines in the UK was former Shadow Home Secretary Ann Widdecombe accusing Channel 4 of “promoting an unlawful activity.” 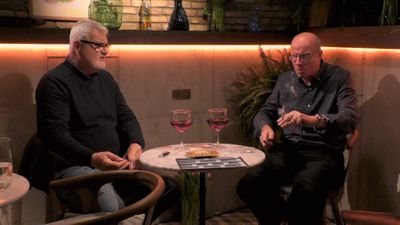 Columnist Sarah Carson added her own take: “The media’s presentation of drug use as an alternative lifestyle choice is harmless enough if you were, say, one of the many white, middle-class, middle-aged people smoking weed at Bob Dylan in Hyde Park last month, confident that the police would leave well alone. Less so if you are an unfairly-targeted demographic — no young black men feature in the first episode of High Society — or someone who is seriously ill and fighting for the right to access medicinal cannabis.”

She also criticized the show for viewing casual drug use “with a flippancy afforded only to the privileged,” to which Harris responded to MERRY JANE, “The series has never purported to be a current affairs program — it’s a factual entertainment program… it’s more a study of human relationships, told with warmth and humor. By inviting different couples who reflect a broad range of society, all with very relatable issues to discuss, we hoped to open the conversation in homes across Britain with a frank, informative, and legitimate new format which is both revealing and entertaining.” 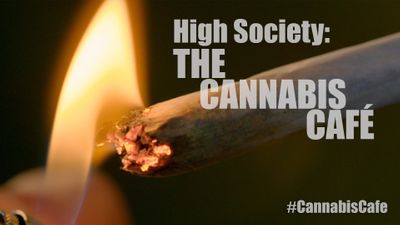 Harris wasn’t just repeating press-release talking points; rather, the show can truly be engaging when you see a couple, say, get high together and talk about their lackluster sex life. It can be cringey in that it’s-so-awkward-it’s-entertaining way, but also enables some tough conversations to find a home in a space where being high pulls down inhibitions.

I’ve never gotten high with my parents, so I was jealous to watch 31-year-old Abby and her father bond over a shared joint at the Coffee Shop in episode two, where their past estranged relationship gave way to a more open and honest dialogue. Until the cafe visit, Abby says she had previously struggled to change her father’s perspective on how she uses cannabis as an effective medication.

In an interview, Abby said about the aftermath of the show, “My dad and I have not had any major disagreements or disputes since our trip to Amsterdam. That is a massive step for us.” 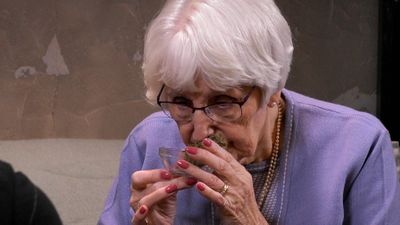 In another poignant moment in the show, a boxer identifying as transgender meets another boxer who transitioned from male to female, and they share their challenges and triumphs as their buzzed conversations reveals how difficult it can be to embrace a new identity in this macho sport. It’s hard to say if such vulnerability would be shared if the two had been sauced over a night of pints.

The criticism lobbed at High Society: Cannabis Café fails to see the forest through the trees (pun intended): sharing cannabis together can provoke tolerance and intimacy, so much so that a relationship show built around getting high could open closed minds. Also, this series shreds myths of the “lazy unmotivated stoner” and instead spotlights the many different folks blazing for the first (or 200th) time, from curious grandmothers to conservative cops. We’ll toke to that.

INTERVIEW
UK
WATCH THIS
CULTURE
MORE...
David Silverberg
FOLLOW
David Silverberg is a freelance journalist in Toronto who regularly writes for The Washington Post, BBC News, Vice, NOW Magazine, the City of Toronto and many more. His cannabis journalism has appeared in High Times Magazine, Lift & Co, PROHBTD, The Globe & Mail and Cannvas.me. For 12 years, he was the editor-in-chief of online news network DigitalJournal.com. Find him at DavidSilverberg.ca
Share this article with your friends!
AD
By using our site you agree to our use of cookies to deliver a better experience.
Accept
Decline
MORE FROM MERRY JANE