CULTURE
Here's How to Make Delicious Magic Mushroom Tea
AD
Psilocybin mushrooms may follow marijuana’s path toward legalization. For those of you lucky enough to live somewhere where ‘shrooms are decriminalized, here are some ideas for making a highly palatable psychedelic tea.
Published on October 11, 2019

Psilocybin mushrooms don’t taste like the mushrooms you buy at the grocery store. They’ve got a heavy, meaty, sometimes-sunflower-seedy flavor tinged with dirt. In other words, they kinda taste like shit. Or so I hear. While some tenacious folks can stomach eating raw ‘shrooms, most psychonauts prefer to specially prepare their fungi so it goes down easier.

One of the easiest ways to prepare ‘shrooms for consumption is by making a tea. There are a couple of ways to do this, and chances are, you can find everything you need to make these teas in your kitchen. The first way to make psilocybin-infused tea is to run hot water through your ‘shrooms. Psilocybin is water-soluble, meaning it dissolves in water. You can either brew the shrooms in hot water then filter out the extraction so there are no shroomy chunks, or you can leave the shrooms in the water and eat what’s left over as you reach the bottom of the cup. Grinding up the ‘shrooms beforehand helps, too.

Virginia Haze, co-author of The Psilocybin Mushroom Cookbook and one of the two admins behind the The Psilocybin Mushroom Bible Instagram account, suggests brewing the ‘shrooms with an herbal tea that can fight nausea. “[M]ushrooms can unsettle the stomach, so, lemon and ginger, or even mint, can be great choices,” Haze wrote to MERRY JANE in an email. “However, we're British, so if you want to extract your psilocybin into a cup of builder's with full-fat milk and three sugars, we aren't going to stop you.”

Gallery — Pair Your Mushroom Tea with These Mushroom Treats

The fastest way to extract psilocybin from mushrooms is to use hot water. You can use boiling water, but it’s probably better to let the liquid cool for a minute or so before beginning the extraction. Although some ‘shroom consumers may be worried about heat destroying the psilocybin, it’s unlikely. While psilocybin is relatively unstable once it’s extracted with water, water will never get hot enough to burn up the good stuff.

It’s also best to consume your mushroom tea shortly after it’s made. Also, feel free to go crazy with spices and flavors. Psilocybin shouldn’t react with most kitchen ingredients. If kept cool in a refrigerator, the tea should remain active for a few days. Savino Sguera, a protege of the late, great psychedelic chemist Alexander Shulgin, told MERRY JANE that freezing the tea can preserve it longer than just cooling it. Lemon juice, which is mostly water, can also extract psilocybin from mushrooms. According to Haze, some ‘shroom tea makers believe that lemon juice extractions will make the trip hit faster and harder. There’s some evidence for this claim, as acids like lemon juice can convert psilocybin into psilocin, which is the compound that actually makes us trip. Psilocybin is technically a prodrug, meaning it’s not psychoactive by itself. But once it’s metabolized into psilocin, the tripping can commence.

Warm lemon juice will be more efficient at psilocybin extraction than cold juice, but don’t boil it. You’ll need to let the ground-up ‘shrooms soak in the juice for about 20 minutes while stirring every 5 minutes, according to the online headshop Zamnesia. Keep in mind that psilocin degrades faster than psilocybin, so the shelf-life of your lemon-extract tea will be shorter than if you extracted it with just water. 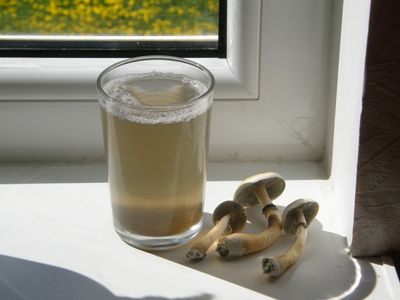 Psilocybin and psilocybin-containing mushrooms are classified as Schedule I drugs in the US, meaning they’re illegal AF. Only Denver, Colorado and Oakland, California have decriminalized psilocybin for personal use, but you can still get busted by state or federal authorities for making these psychedelic teas.

If you don’t live in Denver or Oakland, pursue these recipes at your own risk. Otherwise, consider this some leisure reading while you wait for your area to loosen up its laws around psilocybin.

And if you’ve never taken ‘shrooms before, heed our warning: Start low, and go slow. And don’t just take it easy for your sake. Think about your friends, who will bear the burden of babysitting you while they’re also tripping.

CULTURE
MAGIC MUSHROOMS
MUSHROOMS
SEO
MORE...
Randy Robinson
FOLLOW
Based in Denver, Randy studied cannabinoid science while getting a degree in molecular biology at the University of Colorado. When not writing about cannabis, science, politics, or LGBT issues, they can be found exploring nature somewhere in the Rocky Mountains. Catch Randy on Twitter and Instagram @randieseljay
Share this article with your friends!
AD
By using our site you agree to our use of cookies to deliver a better experience.
Accept
Decline
MORE FROM MERRY JANE