CULTURE
Heady Entertainment: Stay in and Smoke to The Weeknd and Snoop Dogg's "Bones"
AD
This week, treat yourself during self-quarantine with the re-release of Snoop Dogg's horror/stoner film classic, a new book on powerful women dominating the potent weed industry, and fresh tunes from The Weeknd and TOKiMONSTA.
Published on March 20, 2020

Welcome back to Heady Entertainment, MERRY JANE's weekly guide to just-released movies, books, TV shows, and music — all fresh, dank, and THC-friendly. In specific, we choose our picks based on how they can enhance your combined consumption of cannabis and entertainment.

Guess we have to note here, however, that this week’s MERRY JANE is a little different than usual because, really, this week itself is extremely different than usual. With the COVID-19 virus essentially ceasing outdoor activity as we’ve known and smoked in it at present — there are no new theatrical movie releases to report, for example — we’ve added some extra recommendations in our stay-home-and-smoke-hard categories.

For getting high and wigging out to vintage cult flicks, our picks include the Snoop Dogg fright fave Bones; the Andy Kaufman robot comedy Heartbeeps; two very different, but similarly insane biker movies, Hellriders and Pray for the Wildcats; and Munster, Go Home, a collector’s edition of the TV monster family’s only big-screen adventure, featuring audio commentary by Rob Zombie and the guy who played Eddie Munster!

In terms of reading material, Women and Weed: How the Green Rush Is Changing Our Lives by Elana Frankel is a fired-up font of information, while Dodged & Burned: Seminal Rock Photography 1976-1984 by Brian Shanley offers a frontline view of musical outlaws totally unhinged.

Fresh music to puff and pass to is on hand now from The Weeknd, Zebra Katz, TOKiMONSTA, and Eye Flys.

And ICYMI, there are no theatrical movie releases this week! Stay home!

That said, let's go straight — but not "straight" — to this week's fresh-rolled and smoldering recommendations.

Just in case the live-action sci-fi series Altered Carbon didn’t spin your skull enough as you smoked to it, check out this new Japanese anime spinoff, titled Altered Carbon: Resleeved. On the violent and unpredictable planet Latimer, our body-shifting hero Takeshi Kovacs is charged with guarding a tattooist while a firestorm of crime engulfs the urban landscape after the death of a Yakuza boss.

Every contemporary cannabis-comedy fan’s favorite plus-size, no shirt funnyman Bert Kreischer returns to rile up Netflix with another stellar hour of stand-up laughter. This time, Bert goes beyond just jokes about partying and being a parent to taking us through his own elderly dad’s recent discovery of legalized marijuana.

As the very face (and lung, and brains) of modern stoner comedy, SNL’s Pete Davidson finally gets a movie showcase in the form of Big Time Adolescence, so fear not — weed and jokes about weed abound here. BTA focuses chiefly on Mo (Griffin Gluck), a relatively naïve high school student who falls in with Zeke (Davidson), a college flunkie who attempts to enlighten the teenager in the ways of romance and recreation. Jon Cryer, as Mo’s dad, isn’t so sure about Zeke as a role model, and from that tension comes the big laughs between tokes.

A stylish, twisty, seaside-set film noir, the few details we reveal about Blow the Man Down, the more fun it will be for you to pass a joint among pals as you try to keep up with the mystery. Co-writers and directors Bridget Savage Cole and Danielle Krudy make quite the splash with their first feature here, and as does their predominantly female cast, which includes Sophie Lowe, Morgan Saylor, Margo Martindale, Annette O'Toole, and June Squibb. Be prepared for Blow the Man Down to blow your smoke-enlightened mind.

We recommend pairing the new doc Crip Camp: A Disability Revolution with your most potently emotion-coaxing strain and just letting the tears cascade forth as you watch it. Crip Camp is an incredibly engaging, funny, sad, and ultimately uplifting chronicle of a real-life summer camp that started out as a place for disabled kids to go and that’s since become a launching point for a world-changing movement that continues to improve the whole of humanity.

Witches and weed go together (super)naturally, which makes the new Freeform series Motherland: Fort Salem a must for those who mix smoke and sorcery. Set in an alternate-timeline universe, Motherland depicts a modern America where witches have been recognized as fierce and noble soldiers since the colonial days and serve primarily as our nation’s warrior class. The show follows three young military trainees (Taylor Hickson, Jessica Sutton, and Demetria McKinney) as they build their bodies and hone their black-magic skills to combat 21st century threats to freedom — which includes the freedom to get high!

True crime documentary series have become essentially stoner viewing experiences. Kicking the form up to a whole new level of dank insanity, here comes Tiger King: Murder, Mayhem, and Madness. The fresh Netflix series introduces us to one-of-a-kind outlaw Joe Exotic, an eccentric roadside zookeeper who illegally breeds exotic cats and picks up cash on the side crooning country music at local honkytonks. Believe it or not, Tiger King only goes more off-the-rails berserk from there, as polygamy, cult leaders, and drug kingpins get worked into the mix.

One of the 21st century’s first true classics of horror and stoner cinema alike, Bones stars Snoop Dogg as Jimmy Bones, a deeply beloved neighborhood protector who falls murderous victim to a dirty cop in the dog days of 1979. Jumping ahead 20 years, Jimmy Bones’s bones remain entombed in his urban brownstone, while the area he once watched over has fallen on hard economic times and is gripped with corruption and violence.

When four teenagers renovate the Bones estate into an after-hours nightclub, they unwittingly unleash his vengeful spirit, and set in motion a series of thrills and chills as only Snoop Dogg (and whatever you’re imbibing as you watch) can deliver them. The new Bones Blu-ray from Shout Factory looks great and comes packed with bonus features, including a music video, starring yours truly, made just for the flick. More than ever, Bones is smoking!

The only big-screen spin-off of the monstrously popular TV series The Munsters, the campy and hilarious Munster, Go Home sends the first family of fright overseas to England where they stay in a castle so haunted it scares even them! All the series regulars are on-hand for this uproarious adventure, including Fred Gwynne (Herman Munster), Yvonne De Carlo (Lily Munster), Al Lewis (Grandpa), and Butch Patrick (Eddie Munster). Better still, the new Munster, Go Home Blu-ray from Shout Factory adds on the 1981 TV movie The Munsters’ Revenge, and it includes an audio commentary with Butch Patrick, who played Eddie, and the world’s #1 Munsters super-fan himself, shock-rocker Rob Zombie!

Heartbeeps ranks high among the weirdest undertakings of avant-garde anti-comedian Andy Kaufman, and that is saying something — specifically, it’s saying, “Light up, get loaded, and watch this nutso movie.” Set in the future, Kaufman stars as a valet robot who resides in a factory and falls in love with a hostess robot played by Bernadette Peters (The Jerk). The two mechanical servants decide to break free from their human masters and hit the road for all manner of bizarre misadventures.

Biker movies were drive-in and grindhouse staples of the '60s that peaked in the early ’70s and then burned out by that decade’s end. Get ready, then, for Hell Riders, an epic biker stomp that showed up years past the genre’s expiration date, and, as a result, it’s just as off-the-wall as you’d expect.

The motorcycle madmen of the title are members of a California biker gang who are so vicious and vile their fellow outlaw riders keep a safe distance from them. They engage in violent madness you really must be fully smoked up to even kind-of believe. Then, compounding the oddness, Adam West, the caped crusader himself on TV’s Batman, and Tina Louise, who played Ginger on Gilligan’s Island, show up! Inhale deep, and hold the top of your head on tight.

The movie tracks the quartet’s dirt-bike ride into the Baja desert with an unflinching focus on murder, suicide, and copious consumptions of alcohol and drugs. The new Blu-ray from Kino Lorber features a shockingly beautiful transfer and fascinating commentary by film scholars Amanda Reyes and Bill Ackerman. Stoned or not, you’ve never seen anything like Pray for the Wildcats — so absolutely do make a point, then, of seeing it while stoned! 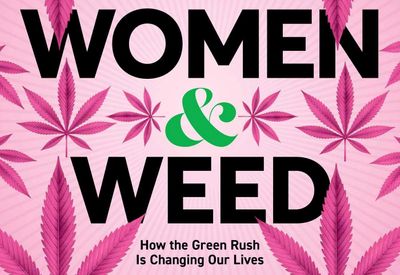 Women and Weed: How the Green Rush Is Changing Our Lives
By Elana Frankel
Get It: Amazon

The growing legalization and ongoing mainstream acceptance of marijuana has upended everything everybody once thought they knew about “business as usual.” Among the reefer revolution's most welcome benefits is how it has enabled women to partake in the furiously emerging marketplace — while still presenting challenges that are both old and new.

In Women and Weed: How the Green Rush Is Changing Our Lives, author Elana Frankel rolls up a rich tapestry of experiences, interviewing the females who fight and flourish in our still-evolving age of cannabis-for-all. It’s a riveting read, packed tight with potent lessons and elevating insights. 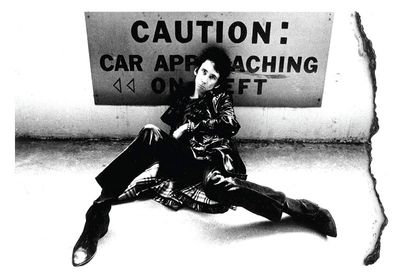 Best known for his astounding '80s work with gothic-industrial powerhouse Wax Trax! Records, photographer and graphic designer Brian Shanley had been snapping pics of underground rock denizens for years, both before and after that legendary run. Hozac Books has now collected Shanley’s eye-popping images in the sumptuously laid-out new book, Dodged & Burned: Seminal Rock Photography 1976-1984. Occupying spaces that no other shutterbugs could access, Shanley captured the drug-drenched sights and diabolically inspirational scene-makers of independent rock’s most incendiary era. Pack a pipe, and treat each page as a trip unto itself.

After Hours
By The Weeknd
Get It: The Weeknd Official

In a lot of ways, it’s The Weeknd’s world, and we’ve all just been in it waiting for his follow-up to the 2018 EP, My Dear Melancholy. At last, After Hours is here, and it’s a trip — specifically, a psychedelic downward spiral that conjures the vice-fueled abandon of movies like Casino, Fear and Loathing in Las Vegas, and Uncut Gems, which, of course, features The Weeknd himself. After Hours is an invitation to a fascinating cinematic chapter from this pop visionary. Fire up a fat one, and follow along for the ride.

Less Is More
By Zebra Katz
Get It: The Vinyl Factory

Oasis Nocturno
By TOKiMONSTA
Get It: TOKiMONSTA Official

Under the moniker TOKiMONSTA, Los Angeles producer Jennifer Lee unleashes a dank sonic sojourn of dope concepts and danceable innovation with her latest album, Oasis Nocturno. Erupting forth from the first single, “Fried for the Night,” a lit collaboration with hip-hop duo EarthGang, Oasis Nocturno is a sweet spot guaranteed, in every sense, to keep you spinning.

Tub of Lard
By Eye Flys
Get It: Thrill Jockey

With Tub of Lard, the Melvins-inspired stoner-metal sludge-noise supergroup Eye Flys pour their molten tons of marijuana music all over the consumer’s consciousness, oozing out tunes, grooves, riffs, and rumbles of the stickiest and most dynamically icky impact. Toke up, and dive deep into Tub of Lard.

Uneasy Laughter
By Moaning
Get It: Sub Pop

MUSIC
MOVIES
POP CULTURE
HEADY ENTERTAINMENT
MORE...
Mike McPadden
FOLLOW
Mike McPadden is the author of "Heavy Metal Movies" and the upcoming "Last American Virgins." He writes about movies, music, and crime in Chicago. Twitter @mcbeardo
Share this article with your friends!
AD
By using our site you agree to our use of cookies to deliver a better experience.
Accept
Decline
MORE FROM MERRY JANE