At the marijuana-ready movies this week, ghoulishness rules and there’s a voice cameo by reefer royalty in the animated Addams Family; Will Smith literally splits his personality in Gemini Man; and Tim Heidecker brings high humor (in the most smoking sense) to Mister America.

On the streaming front, El Camino: A Breaking Bad Movie updates the classic mega-meth series; Little Monsters pits Lupita Nyong’o, Josh Gad, and a class of kindergartners against zombies; and Primal, the new animated series from the creator of Samurai Jack, is a caveman cartoon for Generation Cannabis.

So let’s get straight — but not “straight” — to this week’s recommendations.

Creepy, kooky, spooky, ooky, and beloved by goths and ganja-smokers alike, the grand ghouls of Addams Family rise again, this time in CGI cartoon form, thereby making their macabre misadventures absolutely unlimited in terms of mind-bending visuals to go along with the blood-curdling slapstick.

Keeping pace with the Addams’ eye-popping antics are ace vocal performances by Oscar Isaac as Gomez, Charlize Theron as Morticia, Chloe Grace Moretz as Wednesday, Nick Kroll as Uncle Fester, and — most diabolically dope of all — Snoop Dogg as Cousin Itt!

Will Smith stars in Gemini Man as a globetrotting assassin who finds himself hunted by a killer that’s somehow able to predict his every pattern and match his every move. It turns out his opponent is a cloned version of himself — only 25 years younger, faster, and stronger. Good luck, Fresh Prince!

With Gemini Man, director Ang Lee combines the metaphysical contemplations of his Life of Pi (2012) with the philosophical violence of his Crouching Tiger, Hidden Dragon (2000), and the bone-crunching blockbuster stomp of his Hulk (2003). All those films stand as classics for cannabis consumers, and Gemini is destined to join their high ranks.

The mockumentary Mister America leaps to the big screen from its gestation via the online cult curiosity and cannabis-demanding crack-up On Cinema at the Cinema, cultivated by Tim Heidecker and Gregg Turkington (who you have likely coughed up copious smoke laughing at as Neil Hamburger).

Essentially a pile of in-jokes aimed at Heidecker-heads, Mister America only makes sense if you smoke as much sensemilla as possible before taking it in. It’s surreal stoner humor at its most genre-bustingly sublime.

Picking up where the Breaking Bad TV series left off, runaway meth-maker Jesse Pinkman (Aaron Paul) remains on the lam and thereby extends and expands on the show’s legacy of unprecedented paranoia and breath-smothering suspense.

To reveal more would be to dilute the impact of El Camino on your pot-intensified viewing, but, inhale with ease because stoner heroes Badger (Matt Jones) and Skinny Pete (Charles Baker) return as ganja-goofy as ever.

The title may just as well refer to the kindergarten class the two adults were accompanying when undead Armageddon broke out. The movie shows, with giggly good humor and gross-out gags, how this gaggle of five-year-olds proves absolutely fearsome in combating the flesh-eaters.

Pot culture goes prehistoric with Primal, the new Adult Swim cartoon from Samurai Jack creator Genndy Tartakovsky. Starring a caveman and a Tyrannosaurus Rex, Primal contains no dialogue, but the visuals and the situations speak volumes that are best interpreted while intoxicated. Welcome to the stoned age!

The most howlingly dope horror-comedy of all time, An American Werewolf in London hits Blu-ray in a collector’s edition truly worthy of this loony lycanthropic classic that has freaked out multiple generations of stoners with its Nazi werewolf nightmare and a still unsurpassed transformation sequence.

David Naughton and Griffin Dunne star as American college students backpacking through Europe who make the mistake of checking out some English moors on the night of a full moon. Griffin gets devoured by a werewolf, but Naughton only gets nibbled on, thereby cursing him to agonizingly morph into a flesh-famished man-beast himself.

Beyond the movie itself, the Blu-ray contains hours of bonus materials, and, no matter how much bud you’ve consumed in the past while watching Naughton change into the Wolfman, you haven’t truly had your ass kicked by it until you see it with this 4K restoration. Pack your bong and beware the full moon!

Private School rules as one of the definitive ‘80s teen sex comedies, those gloriously idiotic odes to proms, pranks, peeping, and adolescent anarchy that dominated the decade’s movie screens, cable TV schedules, and joint-passing VHS viewings in the wake of hits like Porky’s (1981), The Last American Virgin (1982), and Valley Girl (1983).

Fresh from Fast Times at Ridgemont High (1982), Phoebe Cates stars in Private School as good girl Christine. She’s romanced by nice guy Jim (Matthew Modine) and rivaled by teen vamp Jordan (Betsy Russell), who, at one point, just decides to doff her top and ride a horse across campus. What were they smoking back then? Oh, yeah — weed!

Spiking this already loopy punch is Bubba Beauregard (Michael Zorek), a Belushi-esque party animal who crashes the girls’ dorm by dressing in drag and never passes up an opportunity to ignite mayhem. 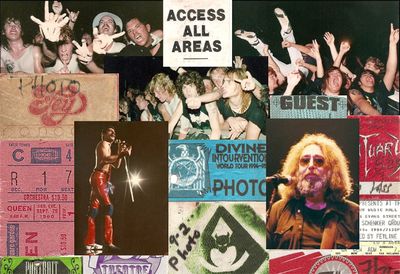 For decades, photographer Bill O’Leary snapped career-defining shots of guitar gods, superhuman singers, and bands with powers beyond those of mortal entities at the apex of their stadium-packing potency from the ‘70s to the ’90s.

The new book, Timeless Concert Images: 40 Years of Rock Concert Experiences, not only collects the highest-impact array of O’Leary’s photos, it also includes his recollections of the wild times, weird occurrences, and world-changing music he captured with his camera.

Plan of Attack
By Curren$y, Trademark Da Skydiver, and Young Roddy
Get It: Apple Music

Any time Curren$y, Trademark Da Skydiver, and Young Roddy put their heads together on a project, hip-hop — and the whole world — gets higher. Now, after a year in the works, founders of the NOLA collective Jet Life have dropped their collaborative LP Plan of Attack, and it’s time to buy into the buzz once more. Hearing, and smoking, is believing.

Sonic Citadel
By Lightning Bolt
Get It: Thrill Jockey

Two-man guitar-and-drums noise-trip supreme Lightning Bolt storm the furthest regions of the rock cosmos once more with Sonic Citadel. Along with their usual jolting innovations, Bolt harkens back to some of their more earthbound influences not only in their ever-expanding sound, but with titles that pay homage to rock titans such as “Hüsker Don’t,” “Don Henley in the Park,” and the ferocious album-closer, “Van Halen 2049.”

MUSIC
TELEVISION
MOVIES
SNOOP DOGG
MORE...
Mike McPadden
FOLLOW
Mike McPadden is the author of "Heavy Metal Movies" and the upcoming "Last American Virgins." He writes about movies, music, and crime in Chicago. Twitter @mcbeardo
Share this article with your friends!
AD
By using our site you agree to our use of cookies to deliver a better experience.
Accept
Decline
MORE FROM MERRY JANE