Outside, the leaves may be changing, but the power of that sweet smokable vegetation that elevates all things remains eternal. On that note, this week’s must-puff-to offerings include two big-screen hitters on opposite ends of the dope spectrum: The Predator is all wild and frightening CGI sci-fi fun, while White Boy Rick drives home the true-life horror of the War on Drugs.

Streaming stoner favorites American Horror Story and Bojack Horseman are back with bud-ready bangs; Dario Argento’s astounding giallo screamer Deep Red gets the special edition treatment; and righteous new recordings have arrived from Jungle, Octavian, and Ro Ransom.  So let’s get straight — but not “straight” to this week’s fresh-rolled recommendations.

“Lizzie Borden took an axe, and gave her mother 40 whacks/And when she saw what she had done, she gave her father forty-one!” So goes the old rhyme about the real-life double murder in 1892 that continues to captivate.

Lizzie, the new big-screen take on the legend of bloodthirsty Ms. Borden, presents the anti-heroine’s parent massacre as a sanguine slaughter on behalf of lesbian liberation. That concept alone provides an opportunity for pot-enhanced pondering; the movie itself is also audacious and creative, thereby compounding its THC appeal.

Action-flick visionary Shane Black (creator of the Lethal Weapon franchise, director of Iron Man 3) reinvents the big-screen Predator series with a sick saga that just screams to be enjoyed in IMAX 3D while ripped on reefer.

The Predator showcases what happens when the infamous intergalactic hunters invade Earth after upgrading their powers with DNA from all manner of alien species. It’s not pretty — in just the insane way you’d hope. A bit of wicked trivia: Shane Black himself gets gorily wasted in the original Predator as bespectacled commando Hawkins.

White Boy Rick details a true-life tragedy of betrayal that begins with a coke-peddling father (Matthew McConaughey) leading his young son Rick (Richie Merritt) into the 1980s Detroit crack trade. After a bust, the feds offer the kid a chance to narc his way out of a life locked up (they say), only to backstab him far more savagely than any dealer on the street could ever dream. As a narrative follow-up to last year’s properly infuriating documentary of the same name, White Boy Rick makes a dramatically visceral case against the madness of drug prohibition and its draconian penalties.

American Horror Story’s eighth go-round, subtitled Apocalypse, mashes up seasons one (“Murder House”) and three (“Coven”) for an all-star end of the world blow-out. By dipping deep into its own history and erupting forth past Armageddon, AHS: Apocalypse twists timeliness, elicits out-of-nowhere scares, and seizes the brain in such a way that you should get lit both to enhance your paranoia and to ease it into a workable buzz.

BoJack Horseman, Netflix’s longest-running (and royally awesome to smoke to) animated series returns with more alternately downbeat and delirious misadventures of its title star — a manic-depressive horse actor attempting to contend with life in the wake of his ’90s sitcom, Horsin’ Around. This time, BoJack gears up for a comeback on a violent, nihilistic series that, with subtle brilliance, parodies everything from Breaking Bad to Narcos and Snowfall.

The First, Hulu’s new sci-fi mind-fry series from the creator of House of Cards, stars Sean Penn as the leader of pack of space jockeys racing to be the first humans to reach Mars. Penn plays legendary astronaut Tom Hagerty, who traverses the inner-space tragedy of being recently widowed while also trying to literally rocket through the cosmos. The First’s real surprise, though, comes from Natascha McElhone as Laz Ingram, an aerospace visionary who seems to be modeled on Elon Musk — and all that implies in a merrily marijuana-boosted sense.

Just like the title indicates, Norm Macdonald Has a Show features the acidly acerbic, suddenly way-controversial funnyman brandishing the bizarre wit that has always made fans wonder, “Is he on something? And if so, where can I get it?”

Deep Red still ranks as the most brilliantly terrifying giallo thriller ever made, and no small part of that arises from how Argento’s sick visuals get amped up to new hallucinatory highs by way of Goblin’s prog-rock blood-storm of a soundtrack.

Oh, this is The Evil all right! It’s all campy haunted house doings about a psychologist (Richard Crenna) and his wife (Joanna Pettet) who discover their recently purchased domicile is actually the property of the devil himself.

From frame one, The Evil supplies toke-worthy insanity by taking itself so seriously; just save your biggest bong-load for the unintentionally hilarious revelation of Satan in the flesh as a rotund blowhard in a white suit, played by Victor Buono, aka “King Tut” on the original Batman TV series. 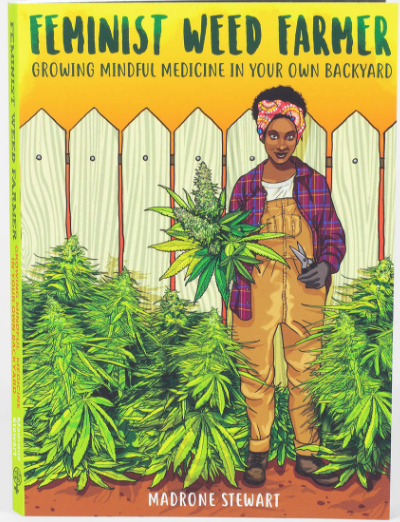 “Feminist Weed Farmer: Growing Mindful Medicine in Your Own Backyard”
By Madrone Stewart
Get It: Quimby’s Bookstore

Sage cannabis cultivator Madrone Stewart instructs and enlightens with Feminist Weed Farmer, crafting a deep, soulful, but also stunningly-practical guidebook with an audience in mind of “women, queer folks, and folks of color” who are being “radically excluded from the emerging cannabis industry.”

Stewart incorporates life lessons, Zen meditation, and other engaging philosophical components in her how-to guide for raising and harvesting marijuana on your own soil — and your own terms.

“For Ever”
By Jungle
Get It: XL Recordings

Five years in, London soul collective Jungle does it again on For Ever. The ever-evolving array of minds and musicians newly incinerates all expectations with funk-disco-psych-tropical-rock-dance inventiveness that can only be summed up as, “Well, that’s Jungle!” Honor this achievement with your most preposterously-blended hybrid strains and just go wherever the sounds take you.

“Possessed”
By Ro Ransom
Get It: iTunes

With Possessed, Ro Ransom rolls a dope new EP showcasing the Harlem rapper blazing away at what he does best: dropping clever rhymes over energetic beats and sweet grooves. Every track on Possessed is weed-worthy, but inhale deepest during the three that feature killer collaborator Kensei Abbot.

“Spaceman”
By Octavian
Get It: iTunes

Spaceman, the scorching new mixtape from Brit rapper Octavian, soars beyond the promise of its title as an intergalactic thrill-ride from its initial blast-off onward. Octavian’s commingling of aggressively brash rhymes over shock beats, heartfelt philosophy that’s gently spoken, and cosmic grandeur overall burns even brighter by way of guest shots by fellow UK bombers Krimbo, A2, Suspect, and Swift. All told: what a trip!

MUSIC
TELEVISION
ENTERTAINMENT
HUMOR
MORE...
Mike McPadden
FOLLOW
Mike McPadden is the author of "Heavy Metal Movies" and the upcoming "Last American Virgins." He writes about movies, music, and crime in Chicago. Twitter @mcbeardo
Share this article with your friends!
AD
By using our site you agree to our use of cookies to deliver a better experience.
Accept
Decline
MORE FROM MERRY JANE