At the movies this week, documentarian Michael Moore ignites inconspicuous truths in Fahrenheit 11/9, while Nicolas Cage roars into narco-fueled prog-metal fantasy in the tripped-out horror-revenge dream Mandy. On Netflix, Emma Stone and Jonah Hill reunite for the first time since Superbad on the darkly deranged comedy series Maniac.

On top of the aforementioned heat, you can trip back to the early ’90s grindhouse scene or the high-’80s MTV era with collector’s edition Blu-ray releases of Angel Town and The Bride, respectively. On the musical front, new releases from Aphex Twin, Gøggs, Young Dolph, and Supersuckers represent a vast spectrum of fresh sounds worth getting stoned to. So let’s get straight — but not “straight” to this week’s fresh-rolled recommendations.

In 2003, righteous provocateur Michael Moore came out swinging with his blockbuster documentary Fahrenheit 911, aiming to unseat George W. Bush from the White House. Fifteen years later, Moore returns to ferocious form with Fahrenheit 11/9 — with the title referring to the date that Donald Trump won the U.S. presidential election.

While Moore is plenty focused on tearing down Trump here, the movie’s larger message transcends politics: get passionate about something, get out there, and make the world better. In a country where drug laws remain draconian and the insanity of pot prohibition persists, that’s an inspiration we all need — no matter who’s in charge until that changes.

In The House With a Clock in Its Walls, extreme horror director Eli Roth (Hostel, The Green Inferno) makes a scary movie for the kiddies, loaded with loony visuals and sudden jolts that seem tailor-made for edible-spiked popcorn accompaniment.

Stoner comedy kingpin Jack Black stars as Jonathan Barnavelt, an elegant warlock whose 10-year-old nephew comes to live with him in the spook-ridden domicile of the title. Cate Blanchett co-stars as a wickedly cool witch next door.

Debuting huge as a midnight movie last week, the acid-blasted fever dream Mandy is positively laying waste to all who experience it and leaving its survivors howling for more. Writer-director Panos Cosmatos (Beyond the Black Rainbow) has conjured a drug film experience and (believe it or not, a Nicolas Cage freak-out vehicle) like no other. Just like when weed first worked for you: believe this hype.

Beautiful and hallucinatory from frame one, Mandy begins as a narco-blissful prog-metal romance, then careens into otherworldly occult terror awash with Manson Family invocations and sexual-terror bikers out of Hellraiser… and then it finally plunges viewers into Nicolas Cage’s dimension-transcending “Rage Cage” revenge mode beyond anything even he could have previously imagined.

Amazingly, in every sense, Mandy delivers all that and more. In fact, it’s all more than can be described with mere words and way too much that can be possibly taken in with a single viewing — or with a single type of intoxicant. From now on, Mandy is the ideal cinematic experience to pair with any drug of choice. Dive in, and then just keep going.

John C. Reilly and Joaquin Phoenix play Eli and Charlie Sisters in The Sisters Brothers. They’re sibling gunfighters traveling the Old West during the California gold rush when they stumble across Hermann Kermitt Warm (Riz Ahmed), a fugitive chemist who may have perfected a formula for finding nuggets that pay a fortune.

If all that sounds like a standard Western plot, rest assured that the wildcard cast (which also include Jake Gyllenhaal as a scout) make good on the movie’s jokey title and turn The Sisters Brothers into a motherlode of laughs spiked with action, thrills, and punchy satire. Reilly and Phoenix have so much fun on screen that they seem to be stoned — so make sure you watch them that way for full enjoyment.

World-class wit and pro-weed wiseman D.L. Hughley hilariously drops one truth-bomb after another on his new Netflix stand-up special, Contrarian. In a time when comedy is our first, best line of defense against tyranny, it’s more than reassuring to have D.L. on the frontline, firing off laugh lines on stage while passionately advocating for marijuana sanity in every arena.

Dark, twisted, unpredictable, the new Netflix mini-series Maniac reunites Superbad co-stars Jonah Hill and Emma Stone as test subjects in a drug trial that goes haywire — like, way haywire. Maniac is definitely comedic in nature, but it’s actually best to reveal little more of its plot points and surprises. Just light up, ease back, and let this severely cracked comedy work its marijuana-ready magic on you.

With impossibly wild brawls, knucklehead dialogue, and gloriously bombastic acting galore, Angel Town is of the best early-’90s ass-kickers to rip a bong to. The movie is also forever notorious for its opening night at a California drive-in that resulted in a real-life rumble involving more than 100 gang members!

Brace yourself for the unintentional retro hilarity of the bad-horror-movie-we-love, The Bride! This straight-out-of-vintage-MTV Bride of Frankenstein remake features Police frontman Sting as the mad doctor who brings dead bodies back to life and Jennifer Beals of Flashdance as his ultimate female creation. Throw in Clancy Brown as Frankenstein’s monster who runs off to join a circus, and The Bride becomes both dope and dopey. Smoke along to it with your favorite ’80s throwback strain and howl! 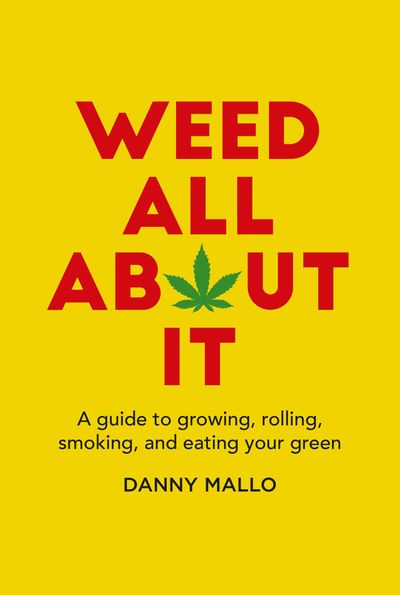 “Weed All About It: A Guide to Growing, Rolling, Smoking, and Eating Your Own Green”
by Danny Mallo
Get It: Quimby’s Bookstore

Any book with a title like the above has some pretty big pipes to pack from the get-go. Fortunately, Danny Mallo — the author of Weed All About It: A Guide to Growing, Rolling, Smoking, and Eating Your Own Green — knows the topic of which he both writes and imbibes, and he’s crafted a simple, direct, witty, and effective how-to compendium for budding marijuana enthusiasts.

Beyond the solid advice for harvesting homegrown stashes, Weed All About It’s most fun takeaway (and the one bound to actually be used most) is a collection of 20 different joint-rolling procedures you’ll be eager to try. Just beware of the one called “The Scorpion”! The hit it delivers is, very much, a sting.

“Collapse”
By Aphex Twin
Get It: AphexTwin.com

For nearly three decades, Richard D. James — the sonic wizard also known as Aphex Twin — continues to electrify a-new with grooves that move like no one else’s. Collapse, the latest Aphex Twin EP, is propelled almost entirely by percussion, with drums on top of drums raining cascades of beats, snares, and kicks beyond what anyone else could imagine, let alone assemble on record. Pack your brain full and bounce along wherever this trip takes you.

“Pre-Strike Sweep”
By Gøggs
Get It: In the Red Records

It’s rock, it’s punk, it’s metal, it’s psych, and it’s more. It’s over-the-top and it’s below-the-belt. It’s the contents of a loose joint fished out of the trash and then mixed in with your most exquisite and expensive strain. It’s masterful musicianship unhinged from the limits of discipline and set free. It’s Pre-Strike Sweep, a new ten-track mind-bomb by Gøggs, the freewheeling madhouse of a supergroup formed by multi-talent Ty Segall with members of Ex-Cult and Fuzz. Fire it up and get blasted.

“Role Model”
By Young Dolph
Get It: iTunes

The cover of Role Model depicts Young Dolph exhaling a cloud of smoke, and the 14 tracks contained on the actual album only further bolster the role of weed when it comes to inspiring this dynamo out of Memphis.

Indeed, top-of-the-line grass seems to emanate from every track on Role Model, as Dolph chronicles the pleasures and prices of high living, aided and abetted by killer collaborators on the royal order of Snoop Dogg, Offset, Kash Doll, Key Glock, and Moma Gabbana.

“Suck It”
By Supersuckers
Get It: MVD

Supersuckers scorch louder, gnarlier, and more recklessly than ever before on Suck It. The Arizona-based rock-‘n’-raunch hellraisers’ eleventh long-player is a dark dunk into blues-bruised abandon, wherein every lick, riff, and growl sounds gloriously soaked in hooch and every note positively reeks of weed. Abandon all inhibitions and party along with them.