CULTURE
Heady Entertainment: Roll a Fat Bone for Willie Nelson’s "Ride Me Back Home"
AD
This weekend, giddy up with ganja OG Willie Nelson for his 69th album. And while you're at it, smoke yourself shitless to the latest installment of the Chucky franchise.
Published on June 21, 2019

Theaters are all about action figures gone wild in very different, but still fun-to-see-high ways, with Toy Story 4 presenting the happy side of the playroom through cutting-edge animated delights, and Child’s Play reviving killer doll Chucky for the CGI horror age.

This week’s vintage mondo-beyondo movie is Lust in the Dust, an epic, bad-taste Western spoof with John Waters superstar Divine, ’50s heartthrob Tab Hunter, and Courtney Gains (aka Malachi from Children of the Corn!).

Our two reefer-ready reading picks are Demonophobiac: Fear of Possession by psychedelic illustration sorceress Corinne Halbert, and Suburban Grindhouse: From Staten Island to Times Square and All the Sleaze in Between by Nick Cato — a gonzo B-movie review guide like no other.

New music drops to mix with your marijuana this weekend include Ride Me Home, the latest from supreme ganja godfather Willie Nelson; M3, a new EP by iLoveMakonnen; and Jesus Said Run It Back, a blisteringly bonkers debut mixtape by Lilbootycall.

Chucky, the killer doll introduced in the original Child’s Play (1988), is beloved by bong-passing horror hounds (including the late, great Bushwick Bill, R.I.P.).

Now, following six sequels, the adorable toy possessed by a serial killer is back on the big screen where he belongs: slashing, wise-cracking, causing nonstop hair-raising carnage that's best appreciated, of course, with the assistance of primo bud.

Mark Hamill provides Chucky’s voice this time, and Aubrey Plaza plays the mom who has the bad luck to pick the cursed “Buddi” doll as a present for her kid. So blaze up a bomber the size of a Barbie, and get Child’s Play-ed.

Twenty-five years after Toy Story reinvented the possibilities of CGI animation and elevated children’s cinema to a higher art form, Toy Story 4 is on-hand to re-up the game. It's also designed serve the franchise’s secondary audience: stoners who love laughing at Buzz, Woody, Mr. Potato Head, and the gang while being bedazzled by all those eye-poppingly brilliant visuals. Be prepared for a new toy pal named Forky, who’s literally a plastic fork with glued-on googly eyes, born from the same ingenuity that can turn absolutely any household object into a bong.

After slaying us with laughter as Jaime on Broad City and being present for very different types of slayings as David Rodriguez on Narcos, Guatemalan-born multi-talent Arturo Castro gets his own starring showcase in Alternatino.

It’s a sketch comedy series “based on Arturo’s experiences as a Latino millennial in the United States.” So pair it with your favorite Broad City strain as opposed to what you smoke while watching Narcos. Arturo also plays 45 different characters on the show, so you can get baked and add to the crack-ups by trying to keep count.

Beats may seem straightforward — as in, “Why should I expend my weed on this?” — but the movie’s joy comes by way  of Everage's breakout performance, who has never acted before and is destined for major things ahead. Pack a bowl, and celebrate a star being born.

The premise of Holey Moley sounds like something that comes out of a bong-passing session that gets everybody guffawing. It’s a 10-part “extreme” mini-golf competition that combines the insane obstacle course show Wipeout with the classic summer game played amid miniature windmills. Now imagine if you actually had the money and pull to make that happen as a primetime series on ABC.

Now, we’re not saying that the hosts and co-creators of Holey Moley — NBA superstar Stephen Curry and funnyman Rob Riggle — were definitely stoned when they hatched this idea, but we’ll definitely be stoned while we’re watching it.

Lust in the Dust is a camp classic that combines talents from the mightiest pool of midnight movie mad-folk. It stars Divine, the titanic trash goddess of various John Waters triumphs, like Pink Flamingoes (1973) and Female Trouble (1987); and it was directed by Paul Bartel, the droll satirist behind Death Race 2000 (1975) and Eating Raoul (1982).

In a no-boundaries send-up of old cowboy flicks, Divine devours the screen as showgirl Rosie Valez. She’s traveling through the southwest pioneer town of Chile Verde, where she falls in love with gunfighter Able Wood, played by 1950s teen idol Tab Hunter, who happily puts to rest any rumors that he was gay right here (he was).

There’s also half-a-treasure-map tattooed on Divine’s ass. Cesar Romero, best known as the Joker on TV’s original Batman series, hams it up as a priest. Courtney Gains, shortly after portraying killer kid Malachi in Children of the Corn, is also in on the fun as a local piano player. As a result, Lust in the Dust may be the one western most worthy of your most potent hallucinogenic weed. 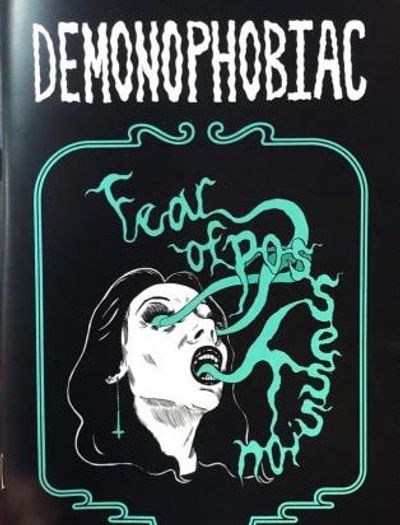 "Demonophobiac: Fear of Possession"
By Corinne Halbert
Get It: Quimby’s Bookstore

Corinne Halbert is a world-class psychedelic artist and weed enthusiast who we previously profiled for MERRY JANE in regard to her black light illustrations.

With Demonophobiac: Fear of Possession, Halbert combines her mastery of mind-bending imagery with personal storytelling to concoct a visual witch’s brew that’s part painful memoir, part graphic occult eruption, and all made to be taken in with the copious aid of marijuana. 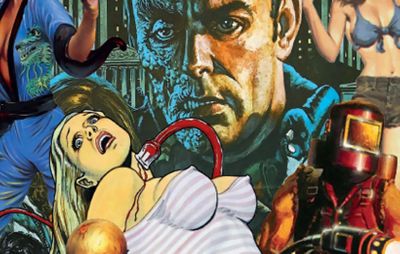 "Suburban Grindhouse: From Staten Island to Times Square and All the Sleaze in Between"
By Nick Cato
Get It: Headpress

Throughout the 1980s, Staten Island resident Nick Cato not only saw every fucked-up B-movie he could, he did it in run-down, high-risk theaters where the audiences themselves were actually way more fucked up than anything getting splattered across all those tattered, fluid-strewn screens. Better still, Cato also wrote about those experiences.

Suburban Grindhouse: From Staten Island to Times Square and All the Sleaze in Between is a compendium of vintage trash-flick movie reviews wherein the write-ups highlight not just the author’s adventures take on the film, but his adventures in the lawless auditoriums that showed them, too.

Drugs, naturally, fueled that entire culture, and each page of Suburban Grindhouse acts as an intoxicating blast back to New York’s scary, scummy, pre-sanitized past. Thus, it’s only right to honor those days, and the fact that Cato survived them, by imbibing any and every inebriant within reach whenever you crack open Suburban Grindhouse — and we’re suggesting you should do that often.

"Ride Me Back Home"
By Willie Nelson
Get It: iTunes

When it comes to monolithic music icons instantly associated with marijuana, Snoop Dogg rules with laid-back swagger on the urban side of the cultural crop, while OG cannabis cowboy Willie Nelson tills glorious fields of green over in the rural district —and the two homies, of course, have long expressed a deep love for one another that’s bonded forever by the pleasures of hemp.

Ride Me Back Home is the 69th album(!) by 86-year-old Willie, and it’s as lit up and lively as any so far in his legendary catalogue. Saddle up with your most robust stash, and hit the high country with Willie — literally.

Five tracks. Five fresh perspectives on life, love, loss, social media, and what it’s like to make music in 2019 as “an urban trap artist who came out as gay.” Five new dope opportunities to toke up and reconnect with iLoveMakonnen. That’s what the new EP M3 delivers, and if the hit single “Drunk on a Saturday” doesn’t make your current summer playlist immediately, well, then — you just need to smoke more!

In 2018, Lilbootycall was a high school student working on beats while skipping class. One year later, the San Antonio native is a viral media sensation dropping his Warner Bros. debut to an audience of millions worldwide who can’t enough of his lit tilting of hip-hop traditions. At last, Jesus Said Run It Back is upon us, and we say play it loud, and smoke whatever you’ve got hard and deep for maximum impact.

MUSIC
TELEVISION
ENTERTAINMENT
MOVIES
MORE...
Mike McPadden
FOLLOW
Mike McPadden is the author of "Heavy Metal Movies" and the upcoming "Last American Virgins." He writes about movies, music, and crime in Chicago. Twitter @mcbeardo
Share this article with your friends!
AD
By using our site you agree to our use of cookies to deliver a better experience.
Accept
Decline
MORE FROM MERRY JANE