Streaming choices veer from the hilarity of the standup series Tiffany Haddish Presents: They Ready and the latest Danny McBride madness The Righteous Gemstones, to the harrowing heaviness of the horror anthology The Terror: Infamy and the return of the serial-killer drama Mindhunter.

Hallucinogenic hip-hop dominates what’s dope in music, with blazing new dispatches from Curren$y, Nef the Pharaoh, and the Doggfather to us all, Snoop Dogg.

So, let’s get straight — but not “straight” — to this week’s fresh-rolled recommendations.

While the deep-sea fright-fest 47 Meters Down (2017) scared moviegoers by pitting a pair of sisters against a cluster of razor-mouthed sharks, the new follow-up, 47 Meters Down: Uncaged, ups the intensity — and the pot-adjustable paranoia factor — by focusing on four teenage scuba-divers under attack by an entire school of finned-and-fanged predators that are famished for human flesh. You’ll gasp, you’ll scream, you’ll get high because the sharks seem so real, then you’ll get high again afterward in relief that, oh yeah, this was just a fun, scary movie.

In today’s “everybody’s offended” age, the prospect of an outrageous, R-rated comedy packed tight with drugs, sex, and F-bombs that centers on 12-year-olds seems so insane that you might wonder — “What, are the people who made that movie high out of their minds?”

Then when you see that Good Boys is actually produced by stoner entertainment overlords Seth Rogen and Evan Goldberg, you’ll realize that, yes, this bold, brazenly hilarious exercise in extreme humor arises from the same perpetually burning pot pyre that also fired up Superbad (2007) and Sausage Party (2016).

The good boys of Good Boys are dorky sixth-grade pals Max (Jacob Tremblay), Thor (Brady Noon), and Lucas (Keith L. Williams). After they get invited to a boy-girl “kissing party,” the three mini-stooges set out to pick up pointers on pubescent face-sucking and end up down an uproarious rabbit hole involving stolen drugs,  frat-house paintball, run-ins with the cops, and running away from teenage hellraisers Hannah (Molly Gordon) and Lily (Midori Francis).

Mindhunter, Netflix’s eerie, enlightening, fact-based series inspired by the FBI’s deep-dive interviews with history’s most horrifying serial killers expands this season to include Damon Herriman repeating his role as Charles Manson from Once Upon a Time in Hollywood.

You don’t even need to drop acid to wig out over Herriman’s portrayal of Charlie, but — really, do drop acid. And while you’re tripping, hang on tight to your skull as season two also features storylines about NYC’s Son of Sam shooter and the early ’80s Atlanta child murders.

On HBO’s new sitcom The Righteous Gemstones, the weed-warped comedic mad-minds behind Eastbound and Down and Vice Principals bring their berserk brand of satire and slapstick to the world of religious scammers. We’re laughing at the premise already.

Upon checking out the cast, then, it’s time to pick out an extra-potent hybrid before viewing: The Gemstones themselves are portrayed, with righteous reefer regality, by Danny McBride, John Goodman, and Workaholics’ Adam Devine.

In a chillingly timely move, the second season of AMC's horror anthology The Terror, subtitled Infamy, takes place inside a Japanese-American internment camp during WWII.

Amplifying the dismay of innocent citizens being held in prison conditions by the US government is the presence of supernatural evil. It’s a brain-bending concept, particularly given our country’s current handling of those deemed “outsiders.” Add pot to the mix and the paranoia factor soars off the chart.

Tiffany Haddish Presents: They Ready: Season One
Watch It: Netflix

With Tiffany Haddish Presents: They Ready, the presently (and hilariously) reigning Queen of Comedy showcases six up-and-coming laugh-makers in a series of Netflix specials.

Tiff’s deliriously funny half-dozen are Chaunté Wayans (Wild ’N Out), April Macie (Last Comic Standing), Tracey Ashley (The Last OG), Aida Rodriguez (This Week at the Comedy Cellar), Flame Monroe (Def Comedy Jam) and Marlo Williams  (Comicview). Each special is eminently weed worthy. Just be careful not to cough out too much smoke due to sudden giggles and guffaws. 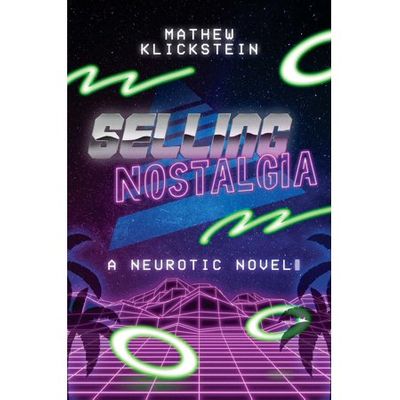 Selling Nostalgia: A Neurotic Novel
By Mathew Klickstein
Get It: Amazon

As the author of the 2013 tell-all Slimed! An Oral History of Nickelodeon’s Golden Age and director of On Your Marc (2017), a documentary about Double Dare host Marc Summers, media maven Mathew Klicksten has spent the past decade steeped in geek culture like few others.

If you’re automatically thinking, “Wow! I’d have to be really high to deal with all those ’90s nerds!” — well, that’s exactly how the hero of Klickstein’s latest book, Selling Nostalgia: A Neurotic Novel contends with traveling between cosplay-overrun conventions while also trying to keep the veteran host of a kid’s talk show from blowing his top.

The end result reads like an acid-witted, weed-and-coke-propelled Fear and Loathing in the Land of Ren and Stimpy Obsessives, amphetamine-pumped by egomaniacal grown-up child stars, psychotically competitive toy collectors, and other mad casualties of society’s collective pop culture overdose.

Aside from Bob Marley himself, no other elevated force did more to spark the worldwide revolution than director Perry Henzell’s The Harder They Come.

Beyond merely the music — which is flamingly brilliant — Harder made an icon of star Jimmy Cliff, established Jamaican cinema as a force to be reckoned with, and ran for decades as one of the true OG midnight movies. Each of those aspects are also deeply tied into the film’s triumph in spreading the glorious gospel of ganja.

Cliff, a musical dynamo well before the cameras rolled, stars in Harder as Ivan Martin, a struggling singer-songwriter who gets robbed of all his possessions and turns to crime just to survive. At the same time that his outlaw rep starts skyrocketing, Ivan’s music begins to storm up the charts.

Suddenly, Ivan finds himself famous at the exact wrong time — when, all at once, the authorities, the record industry establishment, and rival drug lords are out to hunt him down.

A perfect blend of you-are-there location photography, gritty Jamaican realism, Hollywood-inspired fantasy, Cliff’s inherent charisma, and, of course, that magnificent soundtrack, The Harder They Come may well be the ultimate marijuana movie masterpiece.

Shout Factory has sumptuously restored The Harder They Come in an ultra-deluxe, three-disc Blu-ray collector’s package. In addition to hours of bonus materials, the set includes a stunning restoration of No Place Like Home, Perry Henzel’s follow-up film that had been lost since the ’80s.

In terms of vintage stoner cinema classics, this release of The Harder They Come is both profoundly historic and the celebratory bong-passing event of the year.

As if enough horror fans hadn’t gotten high to the 1953 Vincent Price flesh-bubbler House of Wax, Italian splatter maestro Dario Argento (Suspiria, Inferno) got the bug to remake it in the ’90s and desperately tried to persuade his fellow gore-baron Lucio Fulci (Zombie, The Beyond) to direct it.

Unfortunately, Fulci died just before shooting commenced, so the gig went to gross-out visual effects wizard Sergio Stivaletti. The resulting maniac-with-a-meat-hook face-ripper, Wax Mask, is perfect in keeping with the Argento-Fulci tradition, so scare fans are advised to smoke hard, brace themselves for awesome disgustingness, and definitely wait until after viewing to indulge any munchies.

Hot August Nights
By Curren$y
Get It: Apple Music

Every new release by Curren$y is a reason to fire up a fatty in celebration. And since the NOLA rap kingpin is so potently prolific, it’s best to keep your lungs puffing and your ears open as his next project is likely due out any minute.

That stated, Curren$y’s Hot August Nights follows Pheno Grigio, his sensimilla-smooth collaboration with Berner, and Umbrella Symphony, his EP in conjunction with Jay Worthy,  both of which dropped just last month.

Even after all that output, Curren$y has managed to create a full-length studio album in the form of Hot August Nights and, as noted, it’s now time to just inhale deep, listen closely, and enjoy it — until his next one.

I Wanna Thank Me
By Snoop Dogg
Get It: Apple Music

The D-O-double-G reinvented the entire game earlier this year when asked he was awarded a star on the Hollywood Walk of Fame, and, when asked who he’d like to thank for such an achievement, he said — rightly and righteously — “I wanna thank me!”

Yet another iconic Snoop Dogg moment was born, and, naturally, it provides the perfect title for his 17th (!) studio album.

I Wanna Thank Me showcases Snoop not just as the weed MC and show biz supernova supreme that the whole world has come to love — puff by puff by puff — the album also elevates him up another notch as a maturing but perpetually cutting-edge artist yet again.

Mushrooms and Coloring Books
By Nef the Pharaoh
Get It: Apple Music

From its super-psychedelic title, cover art, and tracks that veer from slow-burn jams to soaring slappers and beyond over the course of a single song, Nef the Pharaoh’s new mixtape, Mushrooms and Coloring Books, establishes the Bay Area rapper as leading a new wave of anything-is-possible hip-hop.

420
MUSIC
TELEVISION
MOVIES
MORE...
Mike McPadden
FOLLOW
Mike McPadden is the author of "Heavy Metal Movies" and the upcoming "Last American Virgins." He writes about movies, music, and crime in Chicago. Twitter @mcbeardo
Share this article with your friends!
AD
By using our site you agree to our use of cookies to deliver a better experience.
Accept
Decline
MORE FROM MERRY JANE