This week, big screen highs come in forms both horrifying and heroic as Pet Sematary and Shazam! hit theaters. Returning favorites dominate streaming options in the form smoking new seasons of The Chi, The Chilling Adventures of Sabrina, The Last O.G., and The Tick.

Collector’s editions of cult flicks include the Native American monster movie The Manitou, and a collection of sexy shockers directed by Spanish horror provocateur Jose Lazzar. In music, it’s an array of cutting-edge ear candy from Priests, Cocaine Piss, and Weyes Blood.

The second movie adaptation of Stephen King’s best-selling 1984 page-turner (and weed-burner) Pet Sematary takes us back to the titular animal burial ground where dogs and cats go for their final rests — only to rise again, in definitely not-quite-right form.

This time, Jason Clarke, Amy Seimetz, and Jete Laurence play the family who makes the supernatural mistake of trying to use the makeshift graveyard’s broken black magic to revive a human loved one.

Of course, they should have heeded the warnings of John Lithgow as the old Yankee neighbor who warned against such foolishness, but if they did, we wouldn’t have this fun fright-fest to get loaded to and enjoy this weekend.

As an eternal figure in the realm of cartoon heroes, the bulky, flying, red-suited, white-caped central figure of the comic book Shazam! always had the misfortune of coming off as a not-quite-super-enough Superman and was originally named Captain Marvel, even though he resides in the DC universe.

The new movie affably fixes those issues by A) just calling the mighty dude Shazam, and B) emphasizing everything that’s goofy about the guy with a stoner-pleasing sense of self-effacing good humor and nonstop slapstick gags that land square on the funny bone, especially in IMAX 3D, and extra especially if you’re properly lit while going along for the ride.

Asher Angel ably handles the role of scrawny youth Billy Batson who, after a run in with a sorcerer, can transform himself into the hilarious Zachary Levi as a jet-propelled, muscle-bound crime-fighter just by saying the magic word—“Shazam!” It’s kind of like his version of getting high.

The Chi, Lena Waithe’s acclaimed, heartfelt Showtime series set on Chicago’s South Side is back, taking us even deeper into the day-to-day lives of that embattled area’s residents.

Once again, we follow young couple Jerrika (Tiffany Boone) and Brandon (Jason Mitchell) as they alternately struggle and triumph in life and love. With warmth and wit, we see how their experiences connect to everyone else in the neighborhood through the daily quest to do more than just get by. The Chi is a deep show, so draw your smoke in as you watch it accordingly.

After Riverdale reinvented the dorky gang from Archie comics as badass revolutionaries fighting against everything from political conspiracies to a serial killer, the spin-off series The Chilling Adventures of Sabrina went about 666 degrees darker in its wicked new take on the long-beloved teenage witch.

Kiernan Shipka is back again in the title role, and while her Chilling Adventures plunged deep into the occult during season one, this time the series actually goes to hell!

We’re not kidding: Sabrina joins the Church of Night, pledges her soul to Satan, and gets to have an audience with the antipope. All this, of course, is best enjoy while you perform your own rituals with magic herbs and dancing fires.

The premise alone of The Last O.G. was the definition of dope: Tracy Morgan stars as a Brooklyn local who gets busted hard for a dumb dope deal, does his time, and then returns to find the borough he left behind overrun with hipsters, gentrification, and Tiffany Haddish as his ex-girlfriend who’s now married to a do-gooder yuppie.

Better still, the show more than delivered on the promise of that set-up. Now it’s back for another go-round, with a new season featuring pop-ins by Method Man, Rev Run, Talib Kweli, Rakim, Jack McBrayer, and Dan Hedaya.

As absurdist superhero send-ups go, few have ever felt more positively drenched in drugs than The Tick, which has just landed anew for a second season on Amazon Prime.

Griffin Newman stars as beleaguered accountant Arthur Everest, who lives in an oddball city where superheroes are real, but super-villains are in charge. While feeling especially powerless, Arthur encounters The Tick (Peter Serafinowicz), a blue-suited battler of evil who may or may not be entirely a product of his imagination.

Either way, Arthur and The Tick team up to take on the bad guys and the surrealism was just made to be watched while stoned.

While Brie Larson and Samuel L. Jackson are currently dominating movie screens all over the planet in Captain Marvel, the pair also turn up this weekend on Netflix in Unicorn Store, a quirkily off-kilter comedy that also marks Larson’s directorial debut.

After dropping out of art school, Brit (Larson) gets an invitation to some place called The Store where The Salesman (Jackson) promises he can make her lifelong dream come true and deliver her a real, live unicorn.

What unfolds from there is better just experienced stoned than trying to describe it, so roll a fatty the size of the titular beast’s enchanted horn, fire it up, and let yourself get lost in this Unicorn Store.

While not as well-known as his Italian contemporaries such as Dario Argento and Lucio Fulci, Spanish horror maestro Jose Larraz created some of the most stylish, sexy, bloody, and psychedelic scare films of the 1970s. Finally, with the new Blu-ray collection Blood Hunger: The Films of Jose Larraz, he seems primed to get his due.

Loaded with extras, Blood Hunger showcases three of Larraz’s masterworks that pair exceptionally well with marijuana: the psychosexual shocker Whirlpool (1970); the stunning undead lesbian epic Vampyres (1974), and the fully tripped-out The Coming of Sin (1978). Each Larraz effort is a sensory overload in its own right. Select a different strain to smoke for each title and treat yourself to a blazingly-heightened triple feature.

The Manitou is a camp classic horror hoot that incorporates Native American monster folklore, gloriously hideous ’70s fashions, Hollywood veteran Tony Curtis hamming it up in his cocaine twilight, and Susan Strasberg as a woman who’s pregnant in the neck. Consider all that right now, and then go get properly high and witness this madness.

Curtis stars as a phony fortune-teller who’s suddenly faced with real otherworldly phenomena when he encounters Strasberg’s character who, yes, is carrying the body of a 400-year-old Native American demon in her neck.

It’s called a “Manitou,” and, at one point, he gives birth to himself in an explosion of gore and turns out to be a kill-crazy mutant who’s about the size of killer-doll Chucky.

Fortunately, Michael Ansara shows up as a medicine man who knows how to battle the beast and, before the cracked conclusion, you’ll have smoked so much weed and laughed so hard you won’t even be paranoid about that little tingle every Manitou viewer inevitably feels on his or her own neck. 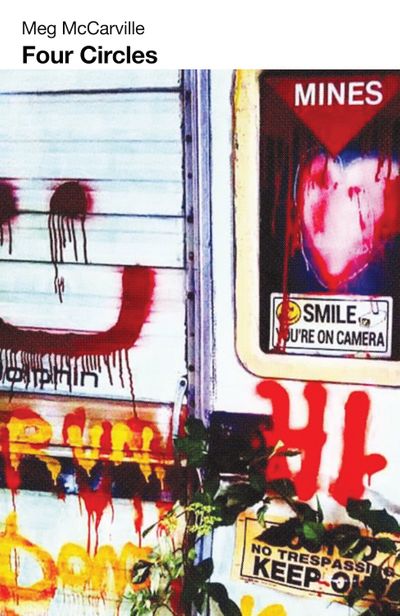 “Four Circles”
by Meg McCarville
Get It: Amphetamine Sulphate

Meg McCarville, who often operates under the moniker Lil Princezz, is a legendary noise-rock/performance-art terror titan known for consuming unimaginable quantities of intoxicants and acting out unspeakable affronts to decency and sanity in a variety of media.

Her live assaults throughout the 2000s with the Midwest shock-rock troupe Gays in the Military scandalized even the most extreme underground music miscreants, and her more recent forays into disgusting doll design and apocalyptically obscene rap records stand out, high and hard, as singularly scorching blows against the empire of “our moral betters” in the name of excess, outrage, and absolute abandon.

The book is so extreme, in fact, that Amphetamine Sulphate, an outfit connected to the most offensive material ever recorded in human history, has issued it with a “trigger warning.” Pull it, and let McCarville blow your mind in every violent, sexual, and narcotic sense of the term.

“Passionate and Tragic”
By Cocaine Piss
Get It: Bandcamp

Drug-rock/art-noise/death-glam brain-bombings you can spasm and/or orgasm to, voluntarily or not, from Belgium: that’s what Cocaine Piss is made of. With a name like that, Cocaine Piss has a lot to live up — and down — to, and, fortunately, the female-fronted shock squad delivers quaking-brained transcendence by the ton on Passionate and Tragic.

“The Seduction of Kansas”
By Priests
Get It: Priests official site

Priests follow up their acclaimed 2017 triumph Nothing Feels Natural with The Seduction of Kansas, an even more dynamic frontline assault of post-punk dance-party anthems for the apocalypse. Edging deeper into electronic production than ever, Priests still flash their DC hardcore deep roots — all while burning everything down within earshot by way of acid-energized enlightenment.

“Titanic Rising”
By Weyes Blood
Get It: Bandcamp

Natalie Mering, who records and mesmerizes as Weyes Blood, describes her latest release, Titanic Rising, as “the Kinks meet the Second World War, or Bob Seger meets Enya.” Far be it for us to challenge the artist’s own take, but we’d also add “the Velvet Underground meets a haunted opera house” and “Stevie Nicks meets celestial eternity.” Ambient electronics, soaring guitars, fairground calliopes, and orchestral extravagance converge as scorching rock under Mering’s soulful, sweet, and scary voice. Take her trip.