CULTURE
Heady Entertainment: High Hits from “Venom” to Ghostface Killah, “Big Mouth” to Mozzy
AD
October’s upon us, so let’s kick off bobbing-for-edibles season with some spooky-scary pop culture picks... all perfectly paired for some pot consumption!
Published on October 5, 2018

October’s upon us, so let’s kick off bobbing-for-edibles season at the movies with The Hate U Give and Venom... or by kicking backing and lighting up at home with news seasons of Big Mouth, Dr. Who, and The Man in the High Castle, as well as the premiere of horror series Into the Dark.

With the high scent of Halloween in the air, the cult fright anthology Trick ’r Treat comes out as a collector’s edition Blu-ray. Nick Cave & The Bad Seeds: An Art Book graphically profiles the post-punk icon. And in music, get ready to hit it heavy with new ready-for-weed releases from Ghostface Killah, Mozzy, and Fucked Up. So let’s get straight — but not “straight” — to this week’s fresh-rolled recommendations.

Based on last year’s knockout YA novel by Angie Thomas, The Hate U Give dives into the dual world of Starr Carter, an African-American 16-year-old who lives in an impoverished neighborhood and is also a student at an upscale, mostly-white prep school.

Starr manages to walk the line between both realities until she witnesses her friend get shot to death by a white cop. Then she’s got to make her voice heard. The Hate U Give is a moving, challenging drama that couldn’t be more timely. See it with friends, then pass a joint afterward and really open up about what the movie so bravely brings to the surface.

Tom Hardy stars as Eddie Brock in Venom as the Marvel anti-hero all pot smokers can identify with on at least one point: his superpowers come from a sticky substance that, upon being ingested, completely transforms his entire being.

Of course, while lush green sticky icky inspires and uplifts the pot puffer, the gnarly black gunk from outer space turns Brock into a seething alien monstrosity with abilities like a mutant Spider-Man, fanged jaws like the creature in Alien, a hyperactive tongue that dwarfs Gene Simmons’, and the general demeanor of Darth Vader on a meth jag. And if you think that’s a sight that needs to be seen in IMAX 3D while you’re stoned, you’re thinking right.

Big Mouth provides an uncomfortably hilarious reminder of the coming-of-age situations that led most of us to try weed in the first place — so spark up, relive those moments, and laugh hard while cringing.

Dr. Who, the BBC’s most iconic sci-fi mind-bender, trips our way again with a bold new wrinkle in the space-time continuum: Jodie Whittaker stars as the Thirteenth Doctor. Whittaker is the first woman to portray the perpetually shape-shifting adventurer, and the Doctor’s adjustment to being incarnated in a female anatomy figures intriguingly into the new season. As always, the BBC is keeping plot details under wraps, but Dr. Who has been a charming component of drug culture for decades. Load up, light up, and get ready to trip anew.

When it comes to big-screen horror, no studio is currently hotter than Blumhouse, the company that brought us Get Out (2017), Happy Death Day (2017), and the top tier fright franchises Insidious, The Purge, and Paranormal Activity.

Blumhouse is now producing a Hulu show, which is big news for bongrippers into bone-chilling entertainment. Into the Dark, a highly frightening new anthology series, makes ghastly good on the promise. Hulu will be dropping 12 episodes every four weeks, with each installment inspired by a holiday that takes place during the particular month. First up (obviously): Halloween!

Paranoia-inclined pot-smokers have been digging The Man in the High Castle since episode one. And as the world around us gets more tripped-out in a terrifying sense, Amazon’s third season of the show arrives right on time.

Set in a world where the Nazis won World War II by conquering the United States, High Castle is a dystopian nightmare that holds up a horrific mirror to our troubled times and provides motivation to fight for the freedoms we hold dear — a struggle close to the heart of every marijuana enthusiast.

Schlock! is where it all began for Landis and, unsurprisingly, it’s a nonstop riot of goofy gags tailor-made for marijuana-enhanced giggle fits. Landis stars as the title character, a prehistoric gorilla monster running wild through a sunny L.A. suburb who finds love when a blind girl feels his face and mistakes him for a mute hippie. Schlock! is a knowing parody of vintage creature features filtered through the same early-70s SoCal blitzed-brained brilliance that brought us Cheech and Chong. Only this one stars a gorilla!

Director Michael Dougherty’s fun, freaky fright anthology Trick ’r Treat won a cult following not just by being scary and clever (which it is), but also by harkening back to old-school home video parties when you and your buds would load up on scary movies and alternately laugh and scream between bong-pulls.

The multi-part saga set on Halloween night chronicles a high-school principal (Dylan Baker) who deals with troublemaking students in a fatal fashion; a zombie prank gone diabolically wrong; Anna Pacquin as the virginal target of a vampire who has a unique way of battling bloodsuckers; and the malevolent misadventures of pumpkin-headed trick-or-treater Sam (Quinn Lord) who roams the landscape enforcing the “rules” of All Hallow’s Eve. 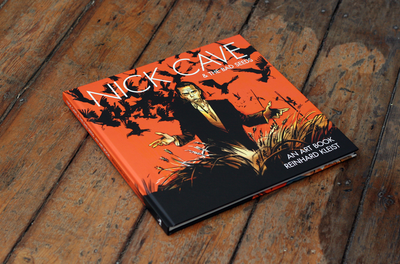 “Nick Cave & The Bad Seeds: An Art Book”
By Reinhard Kleist
Get it: Nick Cave’s website

Nick Cave & The Bad Seeds: An Art Book makes good on exactly what the title promises, but writer and illustrator Reinhard Kleist grabs hold of the concept and launches it into an array of aesthetically-unexpected, profoundly-illuminating directions. Combining comics, portraits, visualized lyrics, and other media, Kleist’s tribute to his hero radically reflects Cave’s music and other creative undertakings — all of which pair potently with sensory-heightening botanical ingestion.

“Dose Your Dreams”
By Fucked Up
Get It: Merge Records

Blunt brawlers Fucked Up emerged from Toronto’s hardcore punk scene to continually mutate their music in experimental and mind-expanding directions. Between their sprawling 2011 punk opera David Comes to Life to last year’s dizzyingly psychedelic Year of the Snake, Fucked Up embody the best of what their name suggests — namely that, with this band, anything can happen. The new double album Dose Your Dreams opens with tinkling pianos and ethereal female vocals, then bulldozes into a onslaught of noise in which to get positively lost for ages.

“Gangland Landlord”
By Mozzy
Get It: iTunes

Repping the Oak Park area of Sacramento and rapping like a master of the universe, Mozzy drops 18 fresh songs on Gangland Landlord and hits all kinds of new highs. Mozzy’s accompanied here by a head-spinning roster of guests, including Schoolboy Q, YG, Ty Dolla $ign, A Boogie Wit Da Hoodie, YFN Lucci, Trae the Truth, Yhung T.O., Blac Youngsta, and Yo Gotti.

Even more intoxicating, you can get these 13 Killah tracks on vinyl, CD, and cassette. The first 1,000 CDs come with a bonus EP and a Ghostface poster; but then again, the vinyl allows you to roll it old school by separating seeds and stems on the cover.