CULTURE
Heady Entertainment: "Mid90s," MihTy, and Hasan Minhaj — Just Add Marijuana
AD
It’s the weekend before Halloween, so here’s our all-treats, no-tricks roster of pop culture goodies to take in before you put on that face paint.
Published on October 26, 2018

On the big-screen, the new Suspiria reworks Dario Argento’s 1977 fright classic into a 21st century drug dream. New streaming choices include cannabis-ready comedy from Adam Sandler and The Daily Show’s Hasan Minhaj, while Castlevania and The Chilling Adventures of Sabrina bring the scary to your vaping and viewing pleasure.

While candy is likely the food group to be most indulged during post-marijuana festivities over the next few days, you can also prepare to feast with the new book, Bong Appetit: The Art of Cooking With Weed. Finally, on the music front, we’ve got dope new drops from Ty Segall, Ty Dolla $ign and Jeremih, and The Smoking Trees. So let’s get straight — but not “straight” — to this week’s fresh-rolled recommendations.

Italian splatter maestro Dario Argento’s Suspiria (1977) is a giallo fairy tale about a European ballet academy secretly run by a coven of witches. It floods the eye with hallucinogenic imagery and colors (especially neon red) and brilliantly bombards the ear with a nightmare-on-fire score by prog gods Goblin. As such, it’s one of the trippiest experiences in all of cinema. This new reimagining by Luca Guadagnino (Call Me By Your Name) features fearsome performances from Dakota Johnson and Tilda Swinton, along with scorching music by Radiohead’s Thom Yorke. All in all, this remake pushes the hell-spawned highs of the original to new peaks that are so insane, it’s scary!

Fresh off his amazing Netflix drug trip series Maniac, actor-turned-filmmaker Jonah Hill is receiving righteous praise — and properly so — for Mid90s, his big-screen directorial debut. Set in the time period of the title, Mid90s chronicles the coming-of-age of 13-year-old Stevie (Sunny Suljic) after he escapes a sucky home life by falling in with a crowd of Los Angeles skaters. Naturally, weed figures huge in the process of growing up here, as does a killer score by Trent Reznor and vintage soundtrack nuggets that include A Tribe Called Quest, Morrissey, GZA, Nirvana, Pixies, and Bad Brains.

Adam Sandler: 100% Fresh is a standup special that harkens back to the legendary ’90s comedy albums that made Sandler a stoner crack-up superstar even before he got into the movies (every pothead of a certain age remembers laugh-choking on smoke while listening to Stan and Judy’s Kid).

Even Sandler naysayers are giving props to 100% Fresh, wherein the funnyman combines clips from shows across the country that feature songs, jokes, and a surprisingly moving tribute to Chris Farley. So that means you won’t just laugh until you cry, you might actually just cry.

The gloriously gory anime series Castlevania rises again with another season of chilly frights and eye-popping delights as a trio of heroes battle Count Dracula (Graham McTavish) who this time won’t stop until he conquers the entire planet. So what Castlevania presents is the prospect of a vampire apocalypse marked with sumptuous art and frightening action. Think you can imbibe weed to that over the Halloweekend?

Just as the CW series Riverdale recasts the old-school gang from Archie comics as existential anti-heroes up against incest conspiracies, serial killers, and deadly political corruption, its new spinoff series based on Sabrina the Teenage Witch also goes way dark. In fact, The Chilling Adventures of Sabrina was deemed too freaky for commercial TV, which is how it ended up on Netflix. So now you can watch, smoke, and get far more paranoid than you expected by way of a character we all best previously knew from a ’90s Melissa Joan Hart sitcom.

“Patriot Act With Hasan Minhaj”: Season One
Watch It: Netflix

Former Daily Show correspondent Hasan Minhaj takes his chill wit, deep knowledge, and infectious sense of civic responsibility to Netflix with Patriot Act, a weekly comedy show that aims to “explore the modern cultural and political landscape with depth and sincerity." Sounds like an opportunity to get lit and woke at the same time.

Anthropophagus — try saying that 10 times fast when you’re high (or even if you’re not) — is Italian sleaze visionary Joe D’Amato’s ultimate extreme horror blowout. It’s a cannibal meltdown that blazes sicker and more shocking than all others and, as such, has happily traumatized hard-toking horror fans for decades. When a group of German tourists falls prey, one by one, to a flesh-eating freak from the wilderness, psycho secrets come to light and director D’Amato piles on the most disgusting gut-munching effects of all time. Just don’t puke into your bong!

Mario Bava established himself as the preeminent master of hyper-stylish giallo horror with Blood and Black Lace. Set in the fashion meccas of Rome and Milan, Blood and Black Lace tracks the wet work of a masked murderer who’s knocking off fashion models. As authorities pursue the killer, an underworld of drugs and vice gets exposed and director Bava creates a cinematic symphony that’s at once gruesome, gorgeous, and magnificently enhanced by ganja.

“She's cool. He's hot. She's from the Valley. He's not.” So goes the tagline for Valley Girl, the beloved ’80s teen sex comedy that temporarily convinced a generation to declare “Gag me with a spoon!” and permanently made a star of Nicolas Cage. He plays Hollywood punk Randy in Valley Girl, the forbidden heartthrob of Deborah Foreman’s Val-speaking Julie.

What plays out is a new-wave spin on Romeo and Juliet with sly jokes, likable romance, and a time capsule soundtrack that features “A Million Miles Away” by the Plimsouls and “I Melt With You” by Modern English. Best of all, the very funny scene where Julie’s hippie dad (Frederic Forrest) sneaks a joint in the bathroom before she goes to the prom is even more hilarious now that weed is legal in the San Fernando Valley. 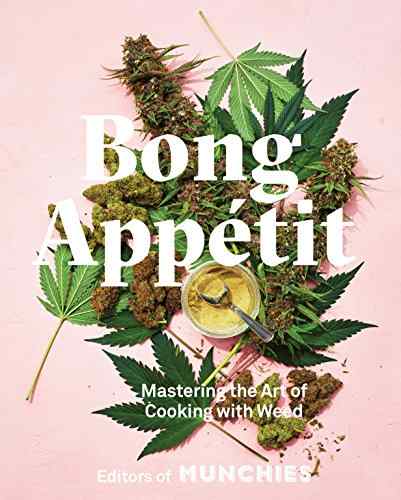 “Bong Appetit: Mastering the Art of Cooking With Weed”
by The Editors of Munchies
Get It: Quimby’s Bookstore

Bong Appetit is VICELAND’s premier culinary cannabis show and now, Bong Appetit: Mastering the Art of Cooking With Weed, is the ultimate take-home version of the popular pot-powered series. This bomb-ass cookbook by the editors of Munchies provides expert, easy-to-follow, “high”-level recipes for everything from appetizers to sides to main courses to cocktails and beyond — all infused with the miracle ingredient that is marijuana.

“Fudge Sandwich”
By Ty Segall
Get It: In the Red Records

With Fudge Sandwich, Ty Segall, the mad multi-instrumentalist whose many musical endeavors include Fuzz, Broken Bat, and MERRY JANE favorite Goggs, unleashes a solo album of covers like no other. Spark up and take it all in as Segall reinvents anthems by Funkadelic, The Grateful Dead, Neil Young, John Lennon, War, Gong, Sparks, Amon Düül II, the Dils, and Rudimentary Peni as brain-benders bearing his signature brilliance.

“MihTy”
By Ty Dolla $ign and Jeremih
Get It: iTunes

After months of smoldering anticipation and merciless teasing between tokes, MihTy, the Hitmaka-produced match-up of Ty Dolla $ign and Jeremih, is at last upon us. The LP boasts 11 tracks well worth saving your most celebratory strain for, with Lil Wayne’s drop-in on “Goin Thru Some Thangz” proving to be an especially inspired and intoxicating collaboration.

“TST”
By The Smoking Trees
Get It: Burger Records

Okay, the band is called the Smoking Trees, so they’ve instantly got our attention. Dropping a needle, then, on TST, the L.A.-based trio’s new album, makes good on the promise of their moniker. The record is a psychedelic flight of space-rock and dream-pop that hits the ears like a bong rip hits the lungs. Tune in, turn on, smoke trees.

420
TELEVISION
ENTERTAINMENT
MUSIC
MORE...
Mike McPadden
FOLLOW
Mike McPadden is the author of "Heavy Metal Movies" and the upcoming "Last American Virgins." He writes about movies, music, and crime in Chicago. Twitter @mcbeardo
Share this article with your friends!
AD
By using our site you agree to our use of cookies to deliver a better experience.
Accept
Decline
MORE FROM MERRY JANE